NEWS: The Mystery that might been reveled !!! Alexander the Great tomb 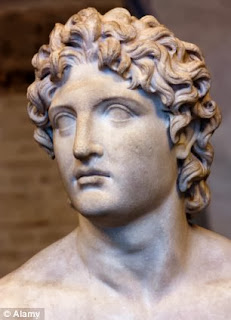 Archaeologists have uncovered what could be the grave of Alexander the Great at a site near ancient Amphipolis. The warrior king - who ruled in the 4th century BC - was thought to be buried in Egypt. But experts have now become excited after they uncovered a marble-faced wall dating from the time. The structure measures an impressive wall measuring 500 metres long and three metres high, which archaeologists believe could contain a royal grave.

The site near ancient Amphipolis lies 370 miles north of Athens. Site archaeologist Aikaterini Peristeri has voiced hopes of finding 'a significant individual or individuals' within.


A Culture Ministry statement has enthused that the archaeologists have partly excavated a mound that has yielded a 'very remarkable' marble-faced wall from the late 4th century BC. Experts believe the ancient artificial mound could contain the remains of the king, or is at least an important royal Macedonian grave.

The news has captured the Greek public's imaginations and many people are hopeful the site will solve the mystery of where Alexander the Great rests.
However, Greece's Culture Ministry has warned against 'overbold' speculation that archaeologists are close to uncovering the king's remains.


Alexander III of Macedon, also known as Alexander the Great, was a king of Macedon, a state in northern ancient Greece. He was born in Pella in 356 BC and was tutored by Aristotle until the age of 16. However, by the age of 30 he had created one of the largest empires of the ancient world, stretching from the Ionian Sea to the Himalayas.

Undefeated in all his battles, he is considered one of history's most successful commanders. He succeeded his father to the throne in 336BC and inherited a strong kingdom and experienced army. Having been awarded the generalship of Greece, he commenced his father's military expansion plans and in 334 BC began a series of campaigns that lasted 10 years.

He conquered the whole of the Persian Empire but being an ambitious warrior, seeking to reach the 'ends of the world,' he invaded India in 326 BC but later turned back.
It is believed Alexander the Great died in Babylon in 323 BC before his plans to invade Arabia.
He is credited with founding some 20 cities that bore his name, including Alexandria in ancient Egypt, and spread Greece's culture east.

There are several stories about where Alexander the Great was buried after he suddenly died of a fever at the age of just 32 - although some believe he was poisoned.

History tells that his body was laid to rest in a gold sarcophagus filled with honey. It is said to have been taken to Memphis before Alexandria in Egypt where it remained until late Antiquity.
Famous Romans Pompey, Augustus and Julius Caesar are all said to have visited his tomb in Alexandria, with Caligula reportedly swiping the warrior's breastplate for a souvenir.

Visit our website egitalloyd.com/alexandria
Posted by Unknown at 5:56 AM