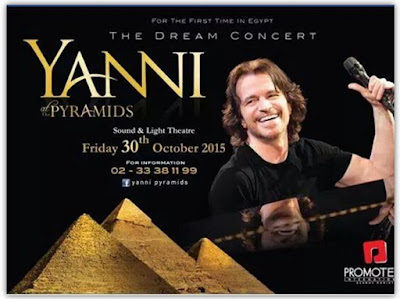 CAIRO: World-renowned Greek-American musician Yanni is to perform “The Dream Concert,” in Egypt on Oct. 30, as announced on his official website Saturday.

For the first time, the long-awaited concert will be performed at the sound and light theatre at the Giza Pyramids at 10:00 p.m.

From the first minute of the announcement, fans on social media platforms expressed their pleasure and excitement, reflecting their love and appreciation to Yanni and his music. As a “dream came true,” a lot of the musician’s fans described their joy and “finally” was the key word of the comments on the unbelievable news.

On the other hand, a large number of the fans expressed frustration towards the pricy tickets of the concert; reasoning that to the fact that a lot will not be able to afford them, especially his fans from the youth.

The 61-year-old musician was born in 1954 in Kalamata, Greece. His first solo album was released in 1980, titled “Optimystique.
Source: Cairo Post– By/ The Cairo Post
Tickets are available on Ticketsmarche.com
Posted by Egitalloyd Travel Egypt at 3:03 PM

Email ThisBlogThis!Share to TwitterShare to FacebookShare to Pinterest
Labels: Egypt is Safe, Pyramids of Giza