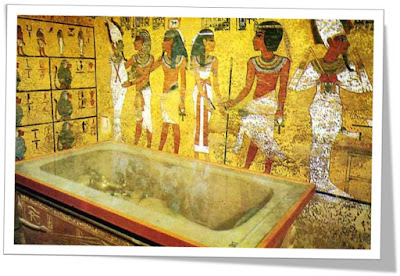 CAIRO: The tomb of Tutankhamun will be closed for renovation starting from Oct. 1, Director of Upper Egypt Antiquities Department Sultan Eid told Youm7.

“The Pharaoh’s mummy will be carefully preserved in a temporary glass display case to be placed in the tomb’s antechamber in order not to be damaged during the restoration work set to be carried out in the burial chamber,” Eid said.

The announcement comes amid controversy regarding the state of preservation of the young Pharaoh’s mummy during the renovation of his tomb; Eid said that the display case includes humidifiers,dust seals, UV protected glass, air circulation and environment control to ensure the safety of the mummy.

“While closed, the outer area facing the tomb entrance will be provided with a screen to show the tomb inside so that visitors to the Valley of the Kings can view the tomb,” Eid said without mentioning when the tomb will be reopened for public again.

In October 2014, the tomb was closed for routine restoration process for its walls and inscriptions carried out by the Getty Conservation Institute.


An exact replica of Tutankhamun’s tomb was inaugurated April 30 in the west bank of Luxor to protect the original tomb from further deterioration.The creation of the tomb’s replica was initiated in 2009 and was led and funded by the Spanish firm Factum Art.The replica tomb was installed next to the house of Howard Carter, the British archaeologist who discovered the tomb in November 1922.
Source: Cairo Post– By/ The Cairo Post
Posted by Egitalloyd Travel Egypt at 11:15 AM