Could the "Scan Pyramids Project" unlock the secrets of Egypt’s Wonders of the Ancient World, asks Nevine El-Aref. 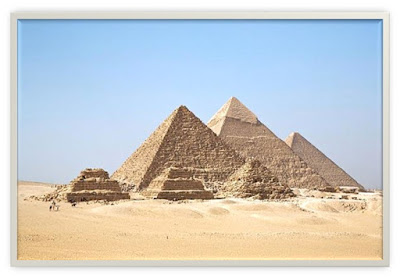 Four millennia after their construction, the ancient Egyptian Pyramids at Giza still conceal their secrets. Although research has been carried out on them throughout history, many questions remained unanswered. How were the pyramids built? Why do they have different shapes? How could they have lasted for 4,500 years without collapsing? Why do the inner structures of the pyramids have such inexplicable anomalies? These are just a few of the unanswered questions that are still puzzling today’s archaeologists.

However, with the help of modern non-invasive technology many of these questions may now be finally resolved. Under the motto “Just because a mystery is 4,500 years old doesn’t mean it can’t be solved,” the Ministry of Antiquities has initiated the ScanPyramids Project in collaboration with the Faculty of Engineering at Cairo University and the French Heritage Innovation and Preservation (HIP) Institute.

The project aims at probing the heart of Egypt’s pyramids from afar without touching or drilling into them. This would be achieved through the use of radioactive muons, or cosmic particles, infrared thermography, photogrammetry, scanning and 3D reconstruction by international researchers from three major universities: the Faculty of Engineering at Cairo University, the Université Laval in Quebec and the Nagoya University in Japan.

“The scientific ScanPyramids Project is an unprecedented, large-scale project and will begin early in November,” Minister of Antiquities Mamdouh Eldamaty told Al-Ahram Weekly on the fringes of a press conference held on Sunday in Cairo. He explained that the first phase of the project would focus on four pyramids from the Fourth Dynasty: the Bent and Red Pyramids of Snefru at the Dahshur Necropolis and the Khufu and Khafre Pyramids on the Giza Plateau.

“We selected these pyramids to be in the project’s first phase not because they are Fourth Dynasty masterpieces, but because they hide many secrets,” Eldamaty said, asking how it had been possible to construct Khufu’s Pyramid on the Giza Plateau, which contains 2.5 million blocks of stone weighing five million tons in only 25 years.

Why does the Bent Pyramid of Snefru in Dahshur have a different structure from the king’s second pyramid at the same necropolis? Why does the Bent Pyramid have two doors and two burial chambers? “The various explorations conducted in the past using less sophisticated means than today have resulted in strange images that could correspond to hidden chambers in these structures,” he pointed out, adding that the high technology methods to be used today were non-invasive and non-destructive.

Eldamaty said that two infrared thermography missions would establish a thermal map of the pyramids to reveal differences in density. One would be conducted by expert Jean-Claude Barré, while the other, running for at least a year, would be led by the Université Laval in Quebec.

“Their goal is to identify if there are any voids behind the facades of the pyramids,” he said. Two missions using muon radiography also aim to verify and accurately visualise the any unknown structures within the monuments. These techniques are being developed in Japan by teams from the country’s High Energy Accelerator Research Organisation (KEK) and Nagoya University.

“The team is to work for a year trying to crack the codes of the pyramids. I am announcing 2016 as the “Year of the Pyramids,” Eldamaty told the Weekly, adding that the ScanPyramids Project had already been approved by the permanent committee of the Ministry of Antiquities and had obtained all the necessary permissions from the concerned authorities.

“The infrared and muon technologies will also be used to look for a possible hidden chamber in king Tutankhamun’s tomb, which may be the burial place of queen Nefertiti, as British Egyptologist Nicholas Reeves proposed in his recent theory,” Eldamaty said.

He said that archaeologists have not discovered the mummy of the legendary queen Nefertiti, and Reeves, who was in Luxor in September to probe his theory, believes a hidden door in Tutankhamun’s tomb could conceal her burial place. The permanent committee for Ancient Egyptian antiquities at the ministry has already approved using radar to search within the boy king’s tomb, but the search is still awaiting security clearance.

Mehdi Tayoubi, president of the HIP Institute, a co-initiator and coordinator of the ScanPyramids Project, described it as “very important” because it is a mix of the arts, science and technology in an attempt to use new perspectives and approaches to find solutions to heritage issues. “Our desire is to form an international team of experts and then to discuss the theoretical and technological approaches that could be used to test the archaeological reality on the ground,” he said.

Many previous missions have attempted to unravel the mysteries of the pyramids, he said, and even if they had been unsuccessful, they had helped advance knowledge. For example, 30 years ago the French EDF Foundation had detected a density anomaly in Khufu’s Pyramid. “Our goal is to make our contribution and to prepare, in all humility, the path for future scientific research missions,” he said.

Former minister of education Hani Hilal who leads the team from the Faculty of Engineering pointed out that until now many theories have been proposed either to explain the construction of the pyramids or their structural anomalies, but nothing has yet been proved. “Now through using state-of-the-art techniques we can get concrete results that archaeologists and Egyptologists will interpret to test which theory is correct or acceptable,” Hilal told the Weekly.

He said that when people asked him about the purposes of participating in such a project as an engineer and not an archaeologist, he answered that “I and the team of engineers are participating in the project because we are physicists and engineers and the pyramids were built by engineers, so we will be better able to understand our ancient Egyptian counterparts. But we would not be able to do so without the cooperation of the archaeologists.”

The ScanPyramids Project was in the direct line of what he had done 30 years ago in 1982, when, in collaboration with a Franco-Egyptian mission from the Faculty of Engineering at Cairo University and the Ecole des Mines in France, he had helped carry out scientific and technological studies on ancient monuments in Egypt. “We were the pioneers in the domain,” Hilal said, adding that the work had led to the creation of the Engineering Centre for Archaeology in Egypt, which had become a centre of excellence in the region..... Read More.
Source: Ahram Online
Related Posts:
‘Scan Pyramids’ Project Hopes to Decipher Ancient Secrets
Egypt's Minister of Antiquities Reveals to Ahram Online Details of 'Scan Pyramids' Project
Posted by Egitalloyd Travel Egypt at 12:04 PM