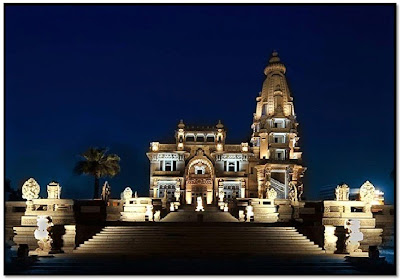 CAIRO: The Antiquities Ministry announced in a statement the preparation of a comprehensive plan to restore and rehabilitate the historic Baron Empain Palace.

“The ministry will organize an international competition for architects to offer their innovative ideas and proposals for the restoration of the over 100 year-old palace,” said Antiquities Minister Mamdouh al Damaty.

The renovation is expected to start in April 2016 when the studies, carried out by Misr Consult engineering consulting office, are completed, according to Damaty.

Located in Cairo’s upscale district of Heliopolis, the palace was built between 1907 and 1911 by Belgian millionaire, Egyptologist and founder of Heliopolis Edouard Louis Joseph, Baron Empain, said head of the Historic Cairo Rehabilitation Project Mohamed Abdel-Aziz.


Built on an area of 12,500 square meters, the palace was designed by French architect Alexandre Marcel, and decorated by Georges-Louis Claude, according to Abdel Aziz.
Source: Cairo Post– By/  The Cairo Post
Related Posts:
Cairo's Baron Empain Palace on its Way to Egypt's Tourist Track
Sale of El-Baron Empain's Palace is a Rumour - Egyptian Government
Short Story: Baron Empain Palace - Throwing light on the sinister and splendid
Posted by Egitalloyd Travel Egypt at 5:34 PM