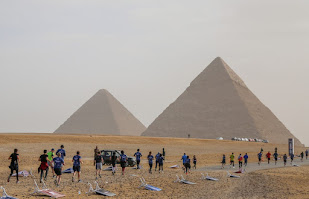 Egypt is building two highways across the pyramids plateau outside Cairo, reviving and expanding a project that was suspended in the 1990s after an international outcry.
The Great Pyramids, Egypt’s top tourist destination, are the sole survivor of the seven wonders of the ancient world and the plateau is a UNESCO world heritage site.
The highways are part of an infrastructure push spearheaded by Egypt’s powerful military and championed by President Abdel Fattah al-Sisi, who is building a new capital city to ease the population pressure on Cairo, home to 20 million people.
The northern highway will cross the desert 2.5 km (1.6 miles) south of the Great Pyramids. The southern one will pass between the Step Pyramid of Saqqara – the oldest one – and the Dahshur area, home to the Bent Pyramid and the Red Pyramid.
Each highway appears to be about eight lanes wide.
Critics say they could cause irrevocable damage to one of the world’s most important heritage sites. Authorities say they will be built with care and improve transport links, connecting new urban developments and bypassing central Cairo’s congestion.
“The roads are very, very important for development, for Egyptians, for inside Egypt,” said Mostafa al-Waziri, secretary-general of Egypt’s Supreme Council of Antiquities. “Know that we take good care of our antiquities sites everywhere in Egypt.”
Some Egyptologists and conservationists say the highways will disrupt the integrity of the pyramids plateau, pave over unexplored archaeological sites, generate pollution that could corrode monuments, produce litter and expose closed areas packed with hidden archaeological treasures to looting.
Al-Waziri said existing roads were much closer to the pyramids and carried a lot of tourist buses. “That is why we are doing a lot of development,” he said, noting plans to use electric tourist buses within the plateau to avoid pollution.
Source: middle east monitor
Posted by Egitalloyd Travel Egypt at 2:23 PM