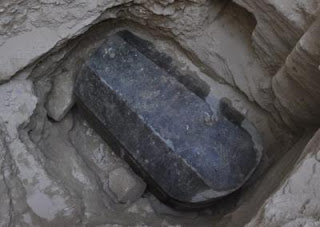 Cairo, Sep 22 (IANS) Egyptian Ministry of Tourism and Antiquities has announced that a pharaonic tomb has been discovered in the country's Minya province.
The tomb was unearthed by an Egyptian mission working at the Tuna al-Gabal archaeological site, Xinhua news agency quoted Mostafa Waziri, head of the ministry's Supreme Council of Antiquities, as saying on Monday.
A limestone coffin and a collection of 'ushabti' (funerary figurine used in ancient Egyptian religion) statues made of faience were found inside the tomb, Waziri said, adding that all the pieces were in good condition.
Initial inspection indicated that the tomb belongs to a person called Jahouti Umm Hoteb from the 26th Dynasty which ruled Egypt between 664-525 B.C., he added.
The official revealed that the person worked as the supervisor of the thrones, adding that he was the son of Hersa Est, whose coffin was uncovered by the same mission in 2018.
Source:menafn
Posted by Egitalloyd Travel Egypt at 4:30 PM No comments: