848 days to go … Egypt's Antiquities Ministry has announced that the Grand Egyptian Museum will be opened in 2015 on the Cairo-Alexandria Road near the famous Giza Pyramids. The new museum, also known as the Giza Museum, is described as the largest archaeological museum in the world and will house artifacts of ancient Egypt.

Five artifacts from King Tutankhamun’s collection are to be transported to the planned Grand Egyptian Museum (GEM) overlooking the Giza plateau for restoration and prepare them to be exhibited in the king’s hall (7500 square meter) when the museum open in 2015. Artifacts are a king's golden wooden bed, plain jewellery box and three tiny wooden religious boats.

Project’s first two phases, including a power plant, fire station, fully-equipped conservation center with 12 labs and four storage galleries were inaugurated in 2010. The third and fourth phases, including the main GEM display building, is under construction.

Now what will happen to the Egyptian Museum in Tahrir Square, Downtown Cairo?
The Tahrir museum will be dedicated to ancient Egyptian art, displaying large statues and colossi expressing the skills of ancient Egyptian artists and artisans.
The design is by Shih-Fu Peng of the Dublin firm Heneghan, winners of the international architectural competition held in 2003.
By Nevine El-Aref– Ahram Online

Posted by Unknown at 2:37 PM No comments:

ABU SIMBEL: Sunbeams inside The Sun Temple of Ramses II at Abu Simbel 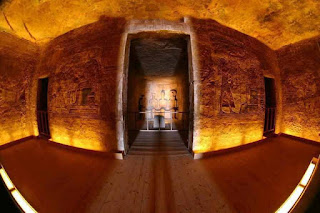 Ramses the bold, Ramses the fair, Ramses the great, Ramses who lived to be 96 had 200 wives and concubines, 96 sons and 60 daughters are but a few descriptions of this ruler of Ancient Egypt. Ramses was also known for his ingenious accomplishments in blending architectural and natural phenomena. The Abu Simbel Sun Festival is one of the worlds most tremendous and unique events to date.

Of the several buildings King Ramses II built, Abu Simbel is considered the most impressive. The Sun Temple has been sitting along the Niles banks since 1250 BC in southern Egypt, carved into the sandstone cliffs facing eastwards.

The first thing you will notice is the facade of the temple with the four 108 feethigh colossal statues of Ramsesguarding the entrance way, which leads into a grand hall separating into two smaller treasury rooms. Further into this labyrinth will take you to the Hypostyle hall filled with flowered pillars and scenes of the Kings family, deeper still leads you to where the natural phenomenon takes place. The inner most chapel is where stands the statues of the four main universal gods Ra, Amun, Ptah and Ramses II to whom the temple is dedicated.

It was oriented by King Ramses II so that the rays of the rising sun would light up the statues of the gods twice a year. The Solstices’ occurrence commemorates Ramses II’s ascension to the throne (22nd February )and his birthday (22nd October).

Crowds pack into the chapel before the dawn breaks and watch the shafts of lightslowly creep 200 feet inside the temple to eventually illuminate the statues in an awe-inspiring display. Funnily enough all but the statue of Ptah is lit up in golden rays, who was after all the god of darkness. After the spectacle the crowds join in celebrations outside of music, dancing, eating, drinking, markets and fun. Of course this is not the high point of the day, as it would be almost impossible to top natures synthesis with human ingenuity, but a nice way to mingle with a culture as ancient as the suns warming rays.
Posted by Unknown at 8:27 AM No comments: 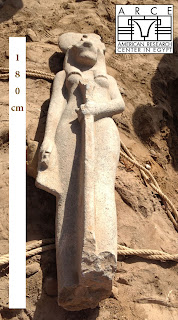 Tuesday 15/1/2013,  announced the A.R.C.E (American Research Center in Egypt) mission working in Goddess Mut temple in south of Karnak complex in co-operation with Ministry of Antiquities, unearthed a granite statue of Goddess Sekhmet dated back to the time of Amenhotep III. said Minister of Antiquities Mohamed Ibraheem.

The 180cm tall statue represents Goddess Sekhmet in a human body with a lioness head crowned with the Sun disc and cobra holding an Ankh in her right hand and Lotus flower in her left hand. The team of US researchers was setting tiles in the second hall of the temple when it came across the masterpiece.

In Egyptian mythology, Sekhmet was originally the warrior goddess as well as goddess of healing for Upper Egypt. She is depicted as a lioness, the fiercest hunter known to the Egyptians. It was said that her breath created the desert. She was seen as the protector of the pharaohs and led them in warfare.

In May 2012, ARCE and Ministry State of Antiquities begun a project to restore and develop Mut temple and the surrounding area to open for public as it was closed since 1976 when ARCE started excavation and conservation work.

The project was planned to be open for public in March in line with the opening of a part of the Sphinx Avenue between Luxor and Karnak temples.

Posted by Unknown at 7:55 AM No comments: 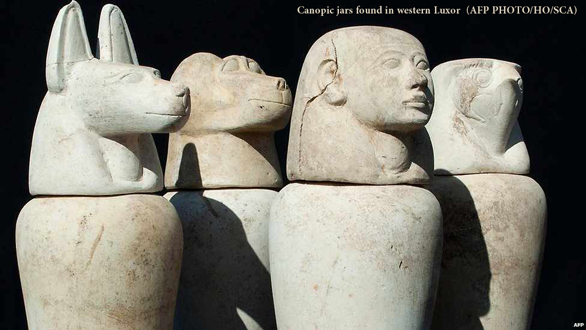 Egypt’s Supreme Council of Antiquities (SCA) released a picture shows canopic jars that were discovered at Amenhotep II’s funerary temple in western Luxor. The jars were found during an excavation by a group of Italian archeologists after they unearthed a cemetery that includes several graves dating back to the beginning of the Third Intermediate Period (1075-664 BC).

The canopic jars are of excellent quality. There are 12 in total, some in limestone, the others in burnt clay. These vessels were used to hold the liver, lungs, stomach and intestines of the dead. The lids of the jars are carved in the shape of the four sons of Horus who are charged with protecting the organs. The baboon-headed deity is Hapi, guardian of the lungs. The human headed deity is Imsety; he protects the liver. Qebehsenuef has a falcon’s head and guards the intestines. Duamutef’s jackal head protects the stomach.

The Italian archaeological team from the Center of Egyptology Francesco Ballerini (CEFB) has been excavating the temple of Amenhotep II for fifteen years. For more about the temple and the group’s excavations, see their website. It has an interesting excavation diary but that’s only available in Italian. It’s worth firing up an online translator to read it, though. 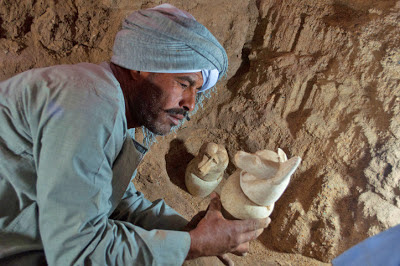