An Ancient Egyptian tomb has been resurrected using a 3D printer - 2,000 miles away in Switzerland. A team of archaeologists and artists is working to create a perfect copy of the tomb of Pharaoh Seti I, one of the largest and most elaborate in Egypt's Valley of the Kings.

The eventual aim of the five-year project is to install the facsimile on a site close to the original, near Luxor.

For now, the two first two chambers have been reproduced and gone on display at a museum in Basel. The Scanning Seti exhibition at the Swiss city's Antikenmuseum contains an exact copy of the pharoah's 3,300-year-old royal sarcophagus, in rooms adorned with intricate etchings and paintings.
It was created by Factum Foundation, a specialist art company which has previously worked on a facsimile of facsimile of Tutankhamen's tomb.

Founder Adam Lowe told CNN Seti's tomb was "the most important library of Pharaonic religion, philosophy, art, poetry and science" in existence. His team used state-of-the-art 3D scanning and printing technology, as well as photogrammetry - the science of taking measurements from photographs - to resurrect the chambers.

They conducted a 3D survey of the walls of the original tomb and worked from fragments removed from Seti's burial chamber in the 19th century, now displayed in museums including the Louvre in Paris, the British Museum in London, and the Pergamon Museum in Berlin.

They also studied watercolors created by Giovanni Belzoni, a former circus strongman who discovered the tomb in 1817 more than 3,000 years after Seti's death.

Belzoni found the tomb in immaculate condition, but years of improperly conducted excavations, looting, and tourism have since taken their toll.  Mr. Lowe said facsimiles had an important role to play in the future of tourism and conversation.
Source: Independent UK
at November 14, 2017 1 comment: 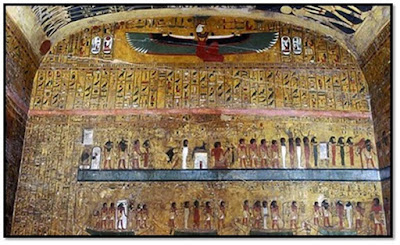 To celebrate 200 years since the discovery of the King Seti I tomb, a free visit to King Tutankhamun's tomb will be available to Seti tomb visitors 17 October. Written By/ Nevine El-Aref.

The Ministry of Antiquities is offering visitors to King Seti I tomb in the Valley of the Kings on Luxor's west bank a free visit to the neighbouring King Tutankhamun's tomb.

Mostafa Waziri, secretary-general of the Supreme Council of Antiquities, told Ahram Online that the free visit would be only for one day, Wednesday, 17 October, for King Seti I visitors. He explains that the free visit to the Tutankhamun tomb comes within the framework of the ministry's celebration of the 200the anniversary of the discovery of the King Seti I tomb.

King Seti I ruled during the 19th Dynasty and his tomb is among the deepest and longest of all tombs in the Valley of the Kings. It is 100 metres long and was uncovered by Italian archaeologist Giovanni Belzoni in October 1817.

The tomb later became known as the "Apis tomb" because a mummified bull was unearthed in a side room off the burial chamber.
Source: Ahram Online
Find More About Re-Opening Sites in Egypt Here
at October 11, 2017 No comments:

The king's entire treasured collection is planned for transfer to the GEM ahead of its 2018 opening. Written By/ Nevine El-Aref.

Tarek Tawfik, GEM supervisor-general, said that the team is now packing the golden king’s funerary bed which is made of wood gilded with golden sheets and decorated with the head of the goddess Sekhmet.

Before packing the bed was subjected to scientific documentation and first aid restoration to guarantee its safe transportation.

GEM's head of first aid restoration Eissa Zidan told Ahram Online that the packing process is carried out in collaboration with a Japanese scientific team and will take eight hours to complete.

The team will use acid-free packing materials and equipment to minimise vibrations during the bed’s transportation.

Zidan said that devices to measure heat and vibration intensity would be used on the bed during its transportation.

All the Tutankhamun artifacts are to be packed and transported to the GEM according to a planned schedule until the soft opening of the new museum in mid-2018.
Source: Ahram Online
All Related Posts About Tutankhamun Click Here
at May 18, 2017 No comments: 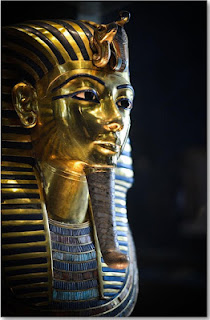 Archaeologists and conservation experts are meeting in Cairo to discuss the safe transportation of King Tutankhamun’s throne, chests and bed from the Egyptian Museum in central Cairo to a new one being built on the other side of the city.

Sunday’s gathering brought together experts from Egypt, France, Spain, Germany, Switzerland, Denmark and Japan and is being organized by the Egyptian Ministry of Antiquities.

No date has yet been set for the transfer of the priceless items, which would be displayed at two halls in the new museum near the Giza Pyramids. The halls are scheduled to open at the end of 2017.

The tomb of King Tut, who ruled Egypt more than 3,000 years ago, was discovered in 1922 in the southern city of Luxor.
Source: Ahram Online
All Related Posts About Tutankhamun Click Here
at May 08, 2017 No comments: