Three rock-hewn burial shafts filled with coffins and faience pots have been uncovered in Egypt's Abusir necropolis near Cairo. Written By/ Nevine El-Aref. 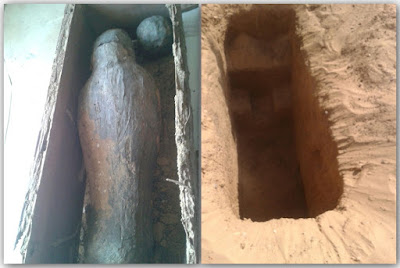 The discovery was made after authorities received reports of illegal excavations in the area.

Mostafa Waziri, secretary-general of the Supreme Council of Antiquities, told Ahram Online that the antiquities ministry formed an archaeological committee led by Sabri Farag, the director-general of the Saqqara Necropolis, to conduct urgent excavations at the site.

Farag says that one of these texts bears the cartouche of King Ptolemy IV (244 – 204 BC), but the remaining text is not clear enough to decipher. More studies are set to be carried out to determine to which reign the coffins belong.

A collection of 38 symbolic pots carved in faience was also found. All the objects are being held in storage at the site for restoration.
Source: Ahram Online
For All New Discoveries Posts Click Here &  To The City of Abu Sir Click Here
at February 06, 2018 No comments:

The newly uncovered temple in Abusir necropolis helps piece together the activities of Ramses II in the Memphis area. Written By/ Nevine El-Aref.

Parts of a temple to King Ramses II (1213-1279 BC), along with reliefs of solar deities, have been uncovered by an Egyptian-Czech mission during excavation work in Abusir necropolis in the the governorate ofGiza

Mohamed Megahed, deputy to the mission director, told Ahram Online that the temple is located in an area that forms a natural transition between a terrace of the Nile and the floodplain in Abusir. He added that the temple is 32 by 52 metres and behind it was a large forecourt along with two identical and considerably long storage buildings to the right and left side of the complex. 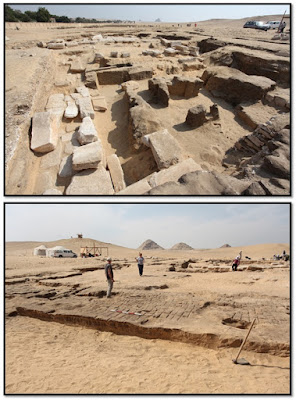 Studies carried out so far, Megahed explained, show that it can be assumed that stone columns lined the side walls of the court, which was enclosed by mud brick walls that were in at least some places painted blue. The rear end of the court, a ramp or staircase leads to an elevated stone sanctuary whose back part was divided into three parallel chambers.

“The remains of this building, which constitutes the very core of the complex, were covered with huge deposits of sand and chips of stone of which many bore fragments of polychrome reliefs,” Professor Mirsolave Barta, director of the Czech mission, told Ahram Online. He pointed out that the fragments not only show the decorative scheme of the sanctuary, but also function to help date the entire complex.

A relief on which is engraved the different titles of King Ramses II was also found, as well as another connected to the cult of solar deities such as Re, Amun and Nekhbet.

“The discovery of the Ramses II temple provides unique evidence on building and religious activities of the king in Memphis area and at the same time shows the permanent status of the cult of sun god Re who was venerated in Abusir since the 5th Dynasty and onwards to the New Kingdom,” Barta asserted.
Source: Ahram Online
For All New Discoveries Posts Click Here &  To The City of Abu Sir Click Here
at October 16, 2017 No comments:

The recent discovery of the tomb of an ancient Egyptian princess from the Fifth Dynasty has opened a new chapter in the saga of the Abusir necropolis, says Nevine El-Aref. An archaeological mission from the Czech Institute of Egyptology at the Charles University in Prague, who is carrying out routine excavations on the north side of the Abusir necropolis, 30km south of the Giza Plateau, has been taken by surprise with the discovery of an important rock-hewn tomb.

The tomb belonged to a Fifth-Dynasty princess named Sheretnebty, and alongside it were four tombs belonging to high–ranking officials. An era enclosed within a courtyard. The tombs had been robbed in antiquity and no mummies were found inside them.

According to the Czech mission’s archaeological report, a copy of which has been given to Al-Ahram Weekly, traces of the courtyard were first detected in 2010 while archaeologists were investigating a neighbouring mastaba (bench tomb). However, active exploration of the royal tomb was not undertaken until this year, when it was discovered that the ancient Egyptian builders used a natural depression in the bedrock to dig a four-metre-deep tomb almost hidden amidst the mastaba tombs constructed around it on higher ground. Four rock-hewn tombs were also unearthed within the courtyard surrounding the royal tomb.

The north and west walls of the princess’s tomb were cased with limestone blocks, while its south wall was cut in the bedrock. The east wall was also carved in limestone, along with the staircase and slabs descending from north to south. The courtyard of the tomb has four limestone pillars which originally supported architraves and roofing blocks. On the tomb’s south side are four pillars engraved with hieroglyphic inscriptions stating: “The king’s daughter of his body, his beloved, revered in front of the great god, Sheretnebty.”

Miroslav Barta, head of the Czech mission, says early investigations have revealed that the owner of the tomb was previously unknown, but that it most probably belonged to the family of a Fifth-Dynasty king. The preliminary date of the structure, based on the stratigraphy of the site and analysis of the name, Barta says, falls in the second half of the Fifth Dynasty. It is surprising that the tomb should not be located in Abusir south, among the tombs of non-royal officials, considering that most members of the Fifth-Dynasty royal family are buried 2km north of Abusir pyramid.

While digging inside Sheretnebty’s tomb, the Czech archaeologists found a corridor that contains the entrances to four rock-hewn tombs of top officials of the Fifth Dynasty. Barta says two tombs have been completely explored so far. The first belonged to the chief of justice of the great house, Shepespuptah, and the second to Duaptah, the inspector of the palace attendants. Both tombs probably date from the reign of King Djedkare Isesi.... READ MORE.
Source: Al-Ahram Weekly
at March 15, 2017 No comments: