Pre-Dynastic wall markings have been uncovered in Subeira Valley near Aswan. Written By/ Nevine El-Aref. 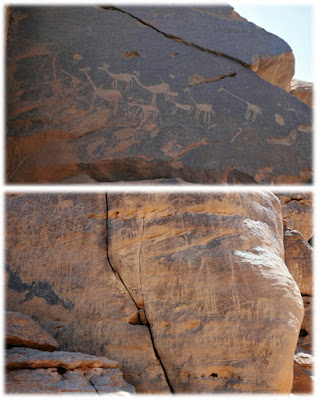 Mostafa Waziri, secretary-general of the Supreme Council of Antiquities, explained that the markings can be dated to the late pre-Dynastic era, and were found engraved on sandstone rocks. They depict scenes of troops of renowned animals at that time, such as hippopotamuses, wild bulls and donkeys, as well as gazelles. Markings showing workshops for the production of tools and instruments were also found on some of the rocks.

Nasr Salama, director general of Aswan and Nubia Antiquities, described the newly discovered markings as "unique and rare" in Egypt. He pointed out that similar markings were previously uncovered at sites in Al-Qarta and Abu Tanqoura, north of Komombo town.

"These markings helped archaeologists to determine the exact dating of the newly discovered ones in Subeira Valley," Salama asserted. He added that 10 new sections of wall markings at around 15,000 years old had been discovered.


Adel Kelani described the discovery as important because it dates to the same period of markings founds in caves in southern France, Spain and Italy, which confirms the idea that art and civilisation during that time spread from Africa to Europe and not vice versa.
Source: Ahram Online
Find More About New Discoveries in Egypt Here
at October 04, 2017 No comments: 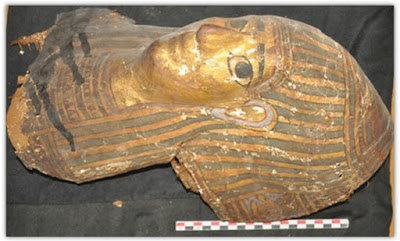 The tombs were uncovered on Aswan's West Bank. Written By/ Nevine El-Aref.

During excavation work in the area neighbouring the Agha Khan mausoleum on Aswan’s west bank, an Egyptian mission from the Ministry of Antiquities stumbled upon ten rock-hewn tombs.

Mahmoud Afifi, dead of Ancient Egyptian Antiquities at the ministry, said that the tombs can be dated to the Late Period and early studies reveal that the site is probably an extension of Aswan necropolis on the west bank where a collection of tombs belonging to Aswan overseers from the Old, Middle and New kingdom are found.

Nasr Salama, director-general of Aswan and Nubia Antiquities told Ahram Online that the tombs have similar architectural design. they are composed of sliding steps leading to the entrance of the tomb and a small burial chamber where a collection of stone sarcophagi, mummies and funerary collection of the deceased were found.

He said that during the next archaeological season which starts in September, the mission will continue the excavation and begin comprehensive studies and restoration work on the funerary collection uncovered to learn more about who the tombs contain.
Source: Ahram Online
Find More About New Discoveries in Egypt Here 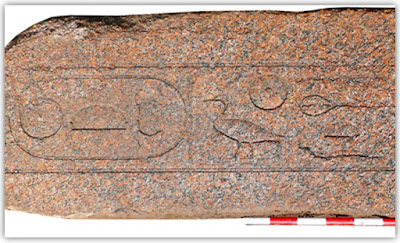 A lintel inscribed with the cartouche of Sesostris II was unearthed at Heryshef temple in Ihnasya. Written By/ Nevine El-Aref.

A large temple lintel made of red granite was discovered by an Egyptian-Spanish mission during excavation work at the temple of Heryshef at an archaeological site in Ihnasya El-Medina, Beni Suef.

Mahmoud Afifi, the head of the Ancient Egyptian Antiquities Department at the Ministry of Antiquities, announced the discovery on Saturday.

He described it as “very important” because the lintel is engraved with two cartouches containing the name of the Middle Kingdom King Sesostris II, (c.1895 – 1889 BC), who built the Lahun pyramid located 10 km away from Ihnasya. 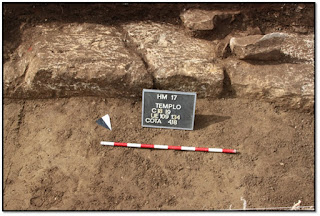 The presence of the lintel at the Heryshef temple proves the interest of Sesostris II in this site, and in Fayoum in general.

Maria Carmen Perez-Die, the director of the mission from the Antiquities Museum in Madrid, said that the mission had uncovered several constructions levels, one dating to the early 18th dynasty, which concluded with the reign of Thutmosis III (c. 1479 – 1425 BC) and another to that of Ramesses II (c.1279 – 1213 BC).
Source: Ahram Online
Find More About New Discoveries in Egypt Here
at May 28, 2017 No comments:

The embalming materials of Ipi, vizier and overseer of Thebes and member of the elite during the reign of King Amenemhat I in the early 20th Dynasty, have been rediscovered in his tomb at Deir Al-Bahari on Luxor's west bank. Written By/ Nevine El-Aref.

Within the framework of the Middle Kingdom Theban Project, an international mission under the auspices of the University of Alcalá (UAH, Spain) has uncovered over 50 clay jars filled with embalming materials for the mummification of the ancient Egyptian vizier Ipi during the cleaning of the courtyard under his tomb number (TT 315).

Mahmoud Afifi, head of the antiquities ministry’s Ancient Egyptian Antiquities Department, said that the jars were first discovered in 1921 and 1922 by American Egyptologist Herbert Winlock inside an auxiliary chamber in the northeast corner of the upper courtyard of Ipi’s tomb, where they were left as is. 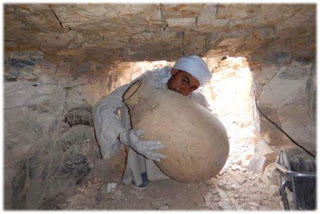 Time has taken its toll on the courtyard, which had been buried in sand before being uncovered by the Spanish mission.

The jars hold equipment such as bandages, oils and salts, which were used by embalmers in mummification, as well as jars, bowls, scrapers, and a mummification board decorated with ankh-signs.

“The identification of these materials is of great importance for understanding the mummification techniques used in the early Middle Kingdom and the assessment of the kinds of items, tools, and substances involved in the process of embalming,” head of the Spanish mission Antonio Morales told Ahram Online.

Morales added that the deposit of the mummification materials used for Ipi included jars with potmarks and other types of inscriptions, various shrouds and four-metre-long linen sheets, shawls, and rolls of wide bandages.

There were also other types of cloth, rags, and pieces of slender wrappings designed to cover fingers, toes, and other parts of the vizier’s corpse.

Team specialist Salima Ikram has identified what seems to be the mummified heart of Ipi, an uncommon practice that no doubt deserves more investigation.

Morales said that the deposit also contained around 300 sacks of natron salt, oils, sand, and other substances, as well as jar stoppers and a scraper.

Among the most outstanding pieces of the collection are the Nile clay and marl jars, some with potmarks and hieratic writing, various large bandages six metres in length, as well as a shroud used for covering the body of the vizier Ipi; a fringed shawl 10 metres in length.

There are also natron bags that were deposited in the inner parts of the vizier’s body, twisted bandages used as mummy packing, and small pieces of bandages for the upper and lower extremities.

The collection should provide members of the Middle Kingdom Theban Project an excellent opportunity for the scientific analysis of the substances, components, textiles, and human remains found in the embalming cache, as well as the technical procedures and religious rituals used in the mummification of a high official in the early Middle Kingdom.

Ezz El-Din El-Noubi, director of the Middle Area of Al-Qurna Antiquities, said that the discovery was made during the third season of project by the University of Alcalá Expedition to Deir El-Bahari in collaboration with the Ministry of Antiquities and the Luxor Inspectorate.

The main purpose of the project is the archaeological study and epigraphy of the tombs of Henenu (TT 313) and Ipi (TT 315), the funerary chamber and sarcophagus of Harhotep (CG28023), as well as the conservation and detailed publication of information of these monuments and others located at Thebes.
Source: Ahram Online
Find More About New Discoveries in Egypt Here &  About Luxor City' Treasures Click Here
at May 22, 2017 No comments: