A lone workman picks through soft rubble, lit by a ray of light from above as he delicately sifts through the sand and debris.
His mattock clinks on something and he calls to his colleague, who joins him in the pit, brushing away the sand to reveal a small statue. It’s an astonishing discovery.
Except that you have to wonder how contrived the setup is, given that the camera crew is already down in the pit with the two men, zooming in on their expressions of wonderment as the dust, which has remained undisturbed for centuries, lifts into the air.
There are a lot of moments like this in Netflix’s “Secrets of the Saqqara Tomb” documentary, as a small team of Egyptian archaeologists uncover a tomb that has been untouched for 4,400 years, leading to a glut of further discoveries and some staggering breakthroughs with regards to ancient Egyptian culture. 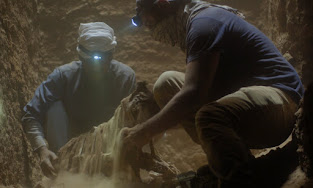 And while some of these moments – as well as a slightly forced narrative about
the team racing against the end of the season – appear cultivated to sprinkle extra drama on this remarkable film, they are easily forgotten when the filmmakers, led by director James Tovell, focus on the team, and their connection to Egypt’s ancient history.
Despite being blessed with no shortage of incredible moments of discovery, “Secrets of the Saqqara Tomb” is at its most remarkably moving when the local workforce and experts are given the opportunity to explain just how and why this history resonates so intently.
Whether it’s digger Ghareeb sharing a rest break with his son, Dr. Amira Shaheen being moved to tears as she tries to empathize with long-dead Egyptians, or foreman Mustafa finding kinship with his ancestors in their use of the same tools, it is these human interactions, and the palpable excitement of the exhausted workers as treasure after treasure is pulled from the sand, that linger longest in the memory.
And those special examples of human connection that make it easy to forgive the more contrived moments.
Source:arabnews
at November 04, 2020 No comments: 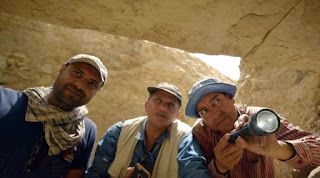 Think of ancient Egypt and the first things that probably come to your mind are buried treasures, curses, and 'The Mummy' (whether that is the Brendan Fraser or the Tom Cruise version probably depends on how old you are). Nevertheless, unless you are someone who is extremely interested in the subject and well-versed, whatever comes to your mind is potentially offensive.
This comes from a principle known as orientalism.
The word was coined by the late Palestinian-American philosopher, Edward Said, to describe how Westerners would often exoticize the Middle East and Asia -- for instance, think of 'Aladdin' (both the original and the remake are guilty of being orientalist) or even, 'The Mummy'.
It is not often you see a documentary on Egyptology that does not involve an offensive outtake, but with Netflix's latest documentary, 'Secrets of the Saqqara Tomb', you can expect something completely different.
For one thing, almost everyone featured in the documentary is Egyptian -- as one archaeologist says, because they are looking at the stories of their own ancestors, they have a different perspective than those coming from outside.
That difference is something you can see and feel throughout the documentary. As the excavations and the artifacts are shown, not once do these people forget that they are handling the remains of people who were once living and the experts featured treat everything with the utmost respect.

'Secrets of the Saqqara Tomb' is also very emotional -- and it is quite unexpected for a documentary that features many shots of just people digging through sand.
We meet many people who work on the Saqqara excavations, including archaeologists Hamada Mansour and Mohammed Mohammed Yousef, and digger Ghereeb.
In the nearly 120-minute long documentary, we learn just as much about the story of these people as we learn about Wahtye, the ancient Egyptian priest who is the focus of the dig at the ancient burial ground.
At one point, as Hamada is excavating in a shaft as others carefully look on, he accidentally disturbs the wooden coffin, and as the pieces of wood fall, so does your heart.
The unraveling of Wahtye's story is just as intense as the anticipation with which the dig proceeds -- they need to find something substantial before the budget runs out for the season so they can extend it to another season.
The documentary is filled with incredible finds -- like the first mummified lion ever found (a lion cub), and a statue for which its three broken parts were found separately in separate seasons.
Another fascinating aspect of the documentary is the presence of women among the men who are digging through the tombs of ancient Egypt.
Three of the experts featured in the documentary are women -- the hieroglyphics expert Nermeen, the anthropologist and rheumatology expert, Amira Shaheen, and funerary archaeologist and archaeozoologist, Salima Ikram.
All three women do an incredible job of piecing together a story from thousands of years ago, just from the bones and objects they find.

There is, of course, one thing that stays with the viewer long after you've watched 'Secrets of Saqqara Tomb'. Hamada says that the Bubasteion Necropolis at Saqqara is strange because it does not give the archaeologists what they are expecting -- and "that's a wonderful thing.
" He says this twice, the second time comes when just as the men are cleaning up everything as the budget runs out, they discover something extraordinary.
You would not expect a documentary on archaeology and history to bring tears to your eyes in the end, but that is exactly what 'Secrets of the Saqqara Tomb' does.
'Secrets of the Saqqara Tomb' is now streaming on Netflix.
Source:meaww
at October 28, 2020 No comments: