An Italian-American archaeological mission working in Aswan's Kom Ombo has uncovered the grave of a woman and her fetus dating back 3,700 years, general secretary of the Supreme Council of Antiquities Mostafa Waziri announced. Written By/ Nevine El-Aref.

Waziri explained that the grave is almost intact and was found in a small cemetery previously used by nomadic people who moved to Egypt from the desert hinterland of its southern neighbour, Nubia, during the Second Intermediate Period (c 1750-1550 BCE).

He added that studies have shown that at the time of her death the woman was about 25 years old and was very close to giving birth. He added that the baby’s skeleton was found in the mother's pelvic area and had already settled in a "head down" position, suggesting that both mother and child may have died during childbirth. 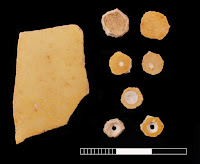 Preliminary analysis of the mother’s remains revealed a misalignment in the woman’s pelvis, most likely the result of a fracture that had healed incorrectly. It is possible that this abnormality had caused problems during labour leading to death.

The mother’s skeleton was resting in a contracted position and was wrapped in a leather shroud. Two pottery vessels accompanied her on her journey to the afterlife: one was a small Egyptian jar, beautifully made and worn down by years of use; and the other was a fine bowl with a red polished surface and black interior, produced by these nomadic communities following a Nubian style.

Waziri mentioned that the mission also found an unexpected offering in the grave, consisting of many unfinished ostrich eggshell beads and blank fragments. The reason behind this offering is unclear; it is possible that in life the woman was a well-regarded bead maker and her family placed an amount of un-worked material in the grave to honour her memory.
Source: Ahram Online
Find More About New Discoveries in Egypt Here
at November 15, 2018 No comments: 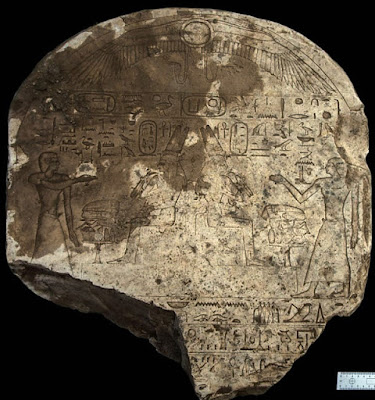 New Discovery, Aswan: A Sarcophagus With A Mummy Uncovered in Late Period Tomb in Egypt 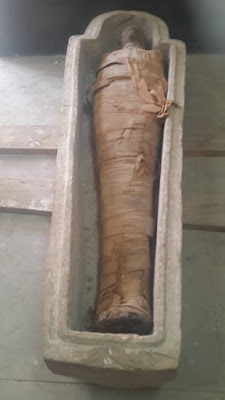 Excavations carried out by an Egyptian mission near the Aga Khan Mausoleum on Aswan's west bank uncovered an anthropoid sandstone sarcophagus with a mummy inside of a Late Period tomb.

Mostafa Waziri, the secretary-general of the Supreme Council of Antiquities, told Ahram Online that the mummy inside the sarcophagus is wrapped in linen and in a very good conservation condition.

Waziri pointed out that more studies are needed to identify the sarcophagus’ owner. He noted that the mission also uncovered a couple of Late Period tombs with walls decorated with scenes depicting several deities such as Isis, Hathor, and Anubis.

A fragmented collection of coloured stone sarcophagi was also unearthed, along with the remains of a wooden coffin inscribed with hieroglyphic text.

Abdel-Moneim Saeed, the director of Aswan and Nubian Antiquities, explained that a large number of mummies, which were haphazardly buried in the tomb, were also unearthed, suggesting that the tomb was used as a communal burial site.

Saeed added that excavations inside the tomb revealed an unidentified sandstone head of a statue, as well as a collection of amulets and scarabs carved in faience and a wooden statuette of the deity Horus.
Source: Ahram Online
Find More About New Discoveries in Egypt Here
at September 19, 2018 No comments: 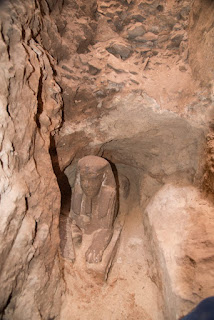 The Egyptian archaeological mission stumbled upon a sandstone statue of a Sphinx during excavation work that was being carried out at the Kom Ombo temple in Aswan to reduce the ground water level. Written By/ Nevine El-Aref.

Mostafa Waziri, general secretary of the Supreme Council of Antiquities, told Ahram Online that the discovered statue likely dates to the Ptolemaic era as it was found in the south-eastern side of Kom Ombo temple, the same location where two sandstone reliefs of King Ptolemy V were previously uncovered 2 months ago.

Abdel Moneim Saeed, general director of the Aswan and Nubia antiquities council said that the mission will conduct more archaeological studies on the Sphinx to discover more information about its history and the king it belongs to.

The previously discovered reliefs of King Ptolemy V were engraved in sandstone and inscribed with hieroglyphic and demotic writings, and upon their discovery, were transferred to the National Museum of Egyptian Civilization in Fustat for conservation and display inside the museum.
Source: Ahram Online
Find More About New Discoveries in Egypt Here
at September 17, 2018 No comments: 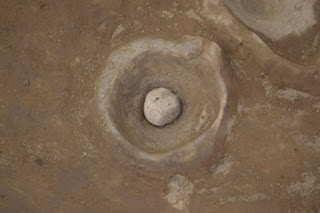 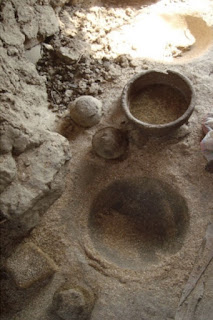