One suspect has been arrested, while two others are still being sought by police. Written By/ Nevine El-Aref

Police and antiquities staff have foiled the theft of a valuable statue of the ancient Egyptian goddess Isis from the Nubian Museum in Aswan.

Mahrous Saeed, Director General of Nubian Antiquities, said that the attempted theft occurred on Sunday afternoon, when the museum was closed for lunch.

Security cameras detected three people moving around inside the museum and attempting to remove a statue depicting goddess Isis breast-feeding her son Horus.

The incident was reported to the Tourism and Antiquities Police, who succeeded in securing the statue and identifying those responsible.

One of the suspects was arrested, but the other two escaped and are being sought by police.

Saeed said that two of the suspects were employees in the museum's administration department, while the identity of the third person is not known.

The Nubian Museum was inaugurated in 1997 to relate the history of Nubia, the area that stretches from Aswan in the north through to Sudan in the south.

The museum was designed as an innovative interpretation of traditional Nubian architecture, winning an Aga Khan Award for Architecture in 2001.

The museum's content is organized along chronological lines, illustrating the development of the region from pre-history up to the present through art and artifacts.

In addition, the museum boasts life-size models showing traditional Nubian customs, as well as a permanent exhibit documenting international efforts, carried out during the construction of the Aswan Dam, to rescue the ancient monuments of Nubia from the waters of Lake Nasser.
Source: Ahram Online

Ancient Egyptians valued animals and insects in a way that seems very alien to us today. 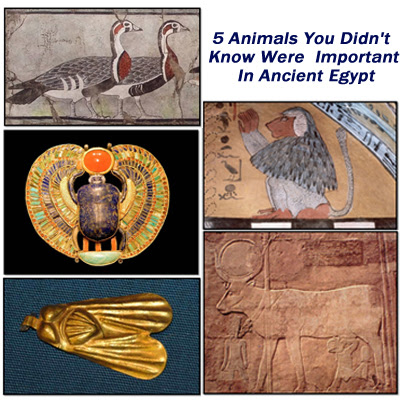 In modern day Egypt, animals are given very little attention and even less social importance. This hasn’t always been the case as ancient Egyptians rooted their understanding of the creation of the universe in the natural elements (earth, air, water fire) and observable wildlife.

It is widely thought that ancient Egyptians worshiped animals, but this is largely a misconception. They looked to their surroundings to learn about divine laws, and it was believed that animals held the godly knowledge they needed to lead successful lives. This is why we see the gods depicted in animal forms.

Ancient Egyptians valued animals and insects in a way that seems very alien to us today.  Their deep respect and appreciation for all creatures, even ones that could threaten their safety, is a reflection of how holistically they saw the world around them.

Of course, we've all heard of cats, jackals and falcons in ancient Egyptian mythology and daily life, but have you heard of these 5 other animals?

1. The Fly
It is likely that the fly was seen with as much disdain as we have for it today. After all, it spreads disease, hovers annoyingly and is generally a source of disturbance. But, ancient Egyptians were able to see past these traits and recognize the fly's persistence and courage.

Kings awarded golden fly amulets in the New Kingdom to distinguished people as part of the Order of Valor.

This golden fly amulet was given in recognition of fierce persistence and bravery in the face of enemies. Think about that next time you swat a fly! 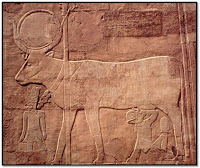 2. The Cow
Like the Hindus, ancient Egyptians recognized divinity in cows. The cow goddess, Hathor – a name that roughly translates to “House of Horus” – is associated with feminine love and motherhood.

When Hathor is not depicted as a cow-headed woman, she is frequently shown in cow-form standing protectively over the king, or suckling an infant king from her udder.

She is the mothering force guarding Horus and each of his earthly manifestations.

3. The Scarab
The dung beetle or scarab, is an image we associate regularly with ancient Egyptian culture, but what does it actually signify?

The dung beetle would find a ball of dung, lay its eggs inside it, push it around with its hind legs until it grew to be several times its size. It would then find an appropriate area to bury the dung. From the depths of the earth, baby dung beetles would emerge.

This process caught the ancient Egyptians’ eye. The dung beetle was linked with the heavenly process of rebirth and regeneration and so became the representation of Khepri (the solar god) on earth. The sun would be rolled across the sky every morning by Khepri, and buried every night, only to appear again the next morning.

4. The Baboon
Thoth, god of the moon and writing, is presented in relation to two animals, the ibis bird and the baboon. While the curvature of the ibis’ beak resembles the lunar crescent, its movement while searching for food in the ground mimics that of a pen writing.

The baboon was deified because of its human-like appearance and intelligence. It is often shown in texts directing the tasks of scribes and with the moon disk on its head.

Interestingly, the baboon was also considered to be a supporter of the sun god Ra. This is because of the baboon's barking at the rising sun in what appeared to the ancient Egyptians as an act of worship.

5. The Goose
It's possible that the early morning squawks of geese helped establish their place in ancient Egyptian creation stories.

It is said that Amun (the hidden creator god) was incarnated as the original goose, the Great Shrieker (or the Great Honker), whose squawk was the first sound in creation.

The Great Shrieker lays the world as an egg in another version of the story.
Source: Step Feed