One of the inscriptions credits the creator God Atum as being responsible for the flood of the Nile, likely dating to the Late Period (664-332 BC). Written By/ Nevine El-Aref. 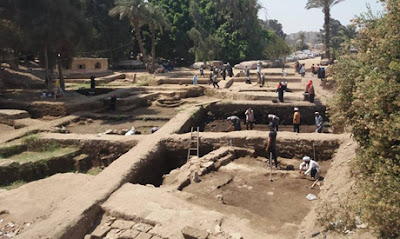 A German-Egyptian archaeological mission working in Matariya, ancient Heliopolis, has uncovered a number of inscribed stone fragments from the 12th and 20th dynasties and the Third Intermediate Period of Ancient Egypt.

The discovery was made during excavation work carried out on debris piles located near a limestone burning installation near 4th and 2nd century workshops in the south-eastern section of the innermost enclosure of the Sun Temple.

Ayman Ashmawy, the head of the Ancient Egyptian Antiquities Department at the Ministry of Antiquities and the head of the Egyptian team, explained that work in the area has yielded much evidence that shows the reusing of the main temple of Heliopolis, with fragments of small statues found in the temple inventory from other historical periods. The work was accompanied by archaeological and archaeo-zoological studies.

Dietrich Raue, the head of the German team, said that the mission has excavated the area located to the east of the obelisk of Matariya, where it found a mud brick enclosure and a limestone staircase leading to a higher level by passing a channel with a false door, which was probably connected to rituals that took place in the innermost section of the temple at the obelisk. 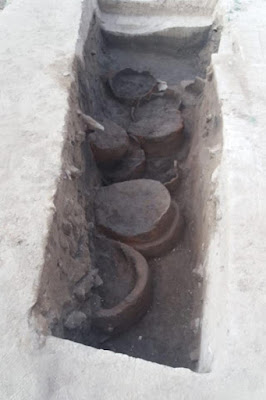 Raue told Ahram Online that an inscription crediting the creator God Atum as being responsible for the flood of the Nile was also found. The inscription likely dates to the Late Period (664-332 BC). Many of these structures bear traces of reuse and destruction by fire.

Khaled Abul-Ela, director of the Inspectorate of Ain Shams and the Matariya archaeological site, said that a shelter has been constructed to protect the blocks on display at the open-air museum in Matariya.

The work was carried out under the supervision of the Project Department Sector at the ministry and supported by the cultural preservation programme of the Federal Foreign Office of Germany.

The open-air museum houses basalt reliefs and reliefs of the Heliopolis temple for Atum of Nektanebu I, limestone reliefs and inscriptions from the Ramesside era, as well as selected finds from the necropolis of Heliopolis.


Source: Ahram Online
You Can Find All Previous New Discoveries Posts Here
at November 12, 2018 No comments:

Ayman Ashmawy, Head of the Ancient Egyptian antiquities department at the Egyptian Ministry of Antiquities, said that these fragments, along with the previously discovered 6,400 pieces, allow researchers to calculate the original size and shape of the colossus, which was deliberately destroyed.

“The new fragments confirm that the colossus once depicted King Psamtek I standing, but it also reveals that his left arm was held in front of the body, an unusual feature. A very carefully carved scene on the back-pillar shows the kneeling king Psamtek I in front of the creator-god Atum of Heliopolis,” Ashmawy told Ahram Online.

He added that the majority of the fragments were found in south of the colossus' pedestal. The temple area was left open, Ashmawy added, probably during the Fatimids Era when the temple walls were dismantled to be reused in several Islamic buildings.

Dietrich Raue, Head of the German mission, explained that excavation work was accompanied by a geomorphological and geophysical survey which revealed many fragments of a quartzite gate belonging to Ramses II and (1279-1213 BCE, 19th Dynasty) and Nektanebo I (379/8–361/0 BCE, 30th Dynasty) near the latter's temple in Matariya. 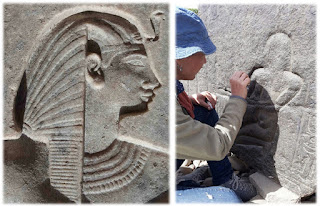 Raue pointed out that the geophysical survey had indicated a number of areas with a large number of fragments of the former temple. Within the four ruined walls of the temple, he said, some exceptional finds were made.

Among them were a fragmented frieze of falcons, part of a gate of Merenptah (1213-1203 BCE, 19th Dynasty) as well as parts of a colossal Ramesside sphinx carved in red granite.

“It seems evident that Nektanebo I added his building to a major temple built at an earlier date,” Raue told Ahram Online. The archaeologist asserted that excavation work in the area has led to the discovery of new room units from the mid-Ptolemaic era.

Some fragments reveal the known practice of reusing of older pharaonic temple items from previous periods during the 2nd and 1st millennium BCE. The work was accompanied by archaeobotanical and archaeozoological studies for the identification of plant and animal remains at the site.
Source: Ahram Online
You Can Find All Previous New Discoveries Posts Here
at April 12, 2018 No comments: 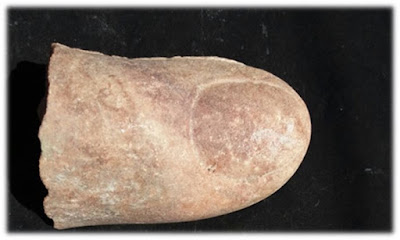 The lower part of a statue of Psamtik I has been unearthed in Souk Al-Khamis area in Matariya district following earlier discoveries in March. Written By/ Nevine El-Aref.

The Egyptian-German Archaeological Mission uncovered most of the remaining parts of the recently discovered colossus of 26th Dynasty King Psamtik I (664-610 BC) while excavating at the temple of Heliopolis in the Souk Al-Khamis area of Matariya district in east Cairo.

Aymen Ashmawy, head of the Ancient Egyptian Antiquities Department and leader of the Egyptian excavation team, told Ahram Online that the joint mission has unearthed around 1,920 separate quartzite blocks comprising the lower part of King Psamtik I colossus.

The mission is composed of archaeologists from the Egyptian Ministry of Antiquities, the Georg Steidorff Egyptian Museum at the University of Leipzig and the University for Applied Sciences, Mainz. 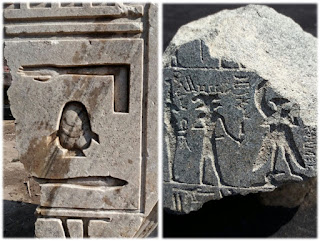 "Early studies carried out on the newly found blocks of the colossus reveal that most comprise parts of the pharaoh's kilt, legs and three toes," Ashmawi pointed out. The studies also suggest that the buried colossus was constructed in a standing position, not a seated one, he stated.

The excavations were focused around the location in which the upper body of Psamtik's colossus had been found back in March 2017, according to Dietrich Raue, the head of the German archaeological team which participated in the mission.

The statue's first part was found just to the north of its more recently uncovered lower part. Evidence suggests the sculpture had been destroyed at an uncertain date and its fragments scattered around a 20-meter diameter area.

The team also uncovered numerous granite blocks that belong to other statues, including one of King Ramses II, the god Rahurakhti, and others yet unidentified. Ashmawy noted that the mission will continue to uncover more of the colossus' lower part during the next archaeological season. The coming find could reveal a total of 2,000 fragments and blocks. 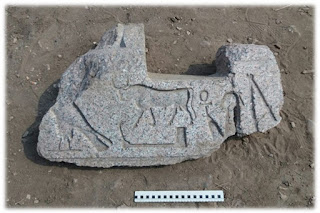 Among the most prominent parts of the uncovered section, he said, is the back pillar engraved with the sacred Horus-name of Psamtik I, "a fact that confirm that the discovered colossus is that of King Psamtik I, and not King Ramses II as some suggested." Upon initial discovery, some archaeologists had believed that it may have belonged to King Ramses II, but the engravings on its back pillar dispelled that hypothesis.

The mission also found a gigantic fragment of the Eye of Horus which was likely a part of a larger statue of deity Rahurakhti. Ashmawy asserted that studies on the newly discovered eye fragment show that this statue could have been up to six meters tall, making it the tallest statue of the deity known from ancient Egypt.

Among the pieces of king Psamtik I's statue, Raue explained, the mission found a collection of red granite fragments of a King Ramses II statue engraved with his Horus name. Also found in the debris were fragments of a Late Period statue decorated with depictions of gods and demons in the style of the Horus-the-saviour stelae and statues. This kind of statue was commonly used in ancient Egyptian temples and believed to hold healing powers for ill individuals. At the northern edge of the area, Raue said, a poorly preserved eight-ton fragment was also extracted. Due to its deteriorated state, Egyptologists were not able to determine its exact dating or to whom it belongs. 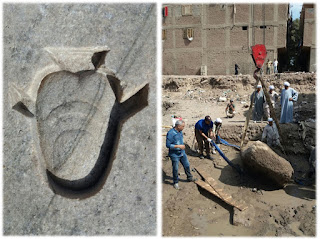 Eissa Zidan, head of the restoration department at the Grand Egyptian Museum (GEM), told Ahram Online that the newly discovered fragments of king Psamtik I's colossus were transported to the museum for cleaning, restoration and archaeological documentation. After a full study of the artifacts, Zidan noted, a plan will be devised to reconstruct the parts of the colossus and put it on display at the GEM.

The upper part of the colossus, which includes of the torso and a large part of the head and crown, is currently on display at the museological garden of the Egyptian Museum in Tahrir. Until its discovery last spring, it had sat under the water table in Souk Al-Khamis neighborhood, an area heavily congested with housing.

Al-Matariya was once Egypt's capital city, in which most Egyptian kings erected their monuments within its temples for about 2400 years. Because of the area's proximity to continued human settlement, the site was heavily destroyed in subsequent millenia, from Late Roman times onward to the Mameluk era and until today. Blocks of the area's ancient temples were re-used to build various monuments in Old Cairo, such as Bab el-Nasr and others.
Source: Ahram Online
You Can Find All Previous New Discoveries Posts Here
at October 10, 2017 No comments: