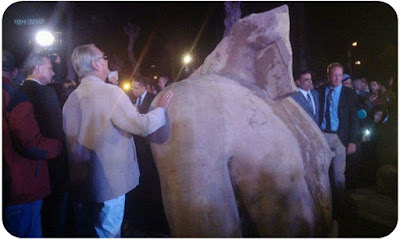 Minister of Antiquities Khaled El-Enany said on Thursday that the royal colossus discovered last week in Matariya district, Cairo is probably a statue of 26 dynasty king Psammetich I not King Ramses II as believed earlier. Hieroglyphic signs and initial studies carried out on fragments of the colossus suggest that it belongs to king Psammetich I(664-610 BC)-26 Dynasty, El-Enany said.

The minister explains that the torso’s back-pillar has preserved one of the five names of king Psammetich I. "If it belongs to this king, then it is the largest statue of the Late Period that was ever discovered in Egypt," he said. This date explains the puzzling features of different ancient stylistic details since the Late Period, which is known for its archaizing art.

Dietrich Raue, the head of the German archaeological mission which participated in the discovery mission, pointed out that the colossal statue is carved in quartzite which was hailed from from Al-Gebel Al-Ahmar in what is now modern eastern Cairo. The statue originally measured about 9 meters in height. The two fragments of the statue were discovered under the water table, which made their location and extraction extremely difficult, Raue explains. The fragments were found adjacent to a heavily congested housing area, two to three meters beneath water levels.

Mahmoud Afifi, the head of the Ancient Egyptian Sector at the ministry, explains that both fragments were moved and successfully saved by a team of the ministry's restorers and archaeologists from Matariya Antiquities Inspectorate and skilled workmen from Qift. 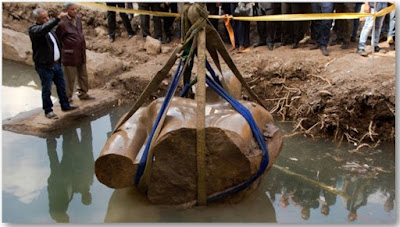 Both parts and a collection of recently discovered artifacts in Matariya were transported today - with the help of the Transportation Department of Egypt’s Armed Forces - to the Egyptian Museum in Tahrir for restoration and temporary exhibition. It will be later tranferred to its permanent home at the Grand Egyptian Museum (GEM), which scheduled for a soft opening in mid-2018.

Aymen Ashmawi, the head of the Egyptian mission, said the artifact that is on show with the fragments of the royal colossus includes a relief of King Ramses II. It features King Ramses II with an extended right arm, performing the ritual of anointing the representation of the cult-statue of a goddess. The goddess can be identified by other blocks from this area as Mut.

This relief was found in the remains of a second temple of King Ramses II. The temple of Matariya is well known as one of the most important sites of pharaonic religion, since it was considered to be the place of the world`s creation by the sun-god. For about 2400 years, most kings erected their monuments in the temple.

Because of the vicinity's proximity to modern Cairo, the site was heavily destroyed in antiquity, from the Late Roman times onwards to the Mameluk era in medieval times.The blocks of the temple were used to build various monuments in Old Cairo such as Bab el-Nasr and others. More monuments could be found in Matariya.
Source: Ahram Online
at March 16, 2017 No comments:

News, Cairo: Second Half of Statue Found in Cairo's Matariya To be Lifted from Ground

The eight metre quartzite statue was found near the temple of Ramses II in the temple precinct of ancient Heliopolis in Greater Cairo. Written By/ Nevine El-Aref.

The German Egyptian Archaeological mission in collaboration with the Egyptian antiquities ministry have taken measures to secure the lift on Monday of the second part of a large statue discovered in the ground of the Souq El-Khamis area in El-Matariya last week.

The first part of the eight metre quartzite statue, which the archaeologists believe could be of Ramses II, was removed from the ground on Thursday.

Mahmoud Afifi, head of the ministry's Ancient Egyptian Antiquities Department told Ahram Online that the team laid bedded ropes under the part of the statue set to be lifted Monday, often used with heavy antiquities. 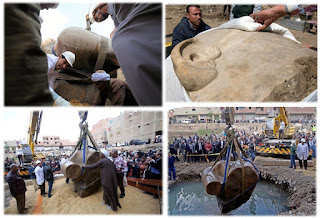 Head of First Aid Conservation at the Grand Egyptian Museum Eissa Zidan said the team extracted a water sample where the statue was found and determined that the water was neutral to alkaline.

This knowledge will allow the team to take the appropriate steps to preserve the statue.

The part of the statue pulled out on Thursday has been packed in treated materials, and will undergo a process of wetting with neutral water and perforation to ensure that it adapts gradually to an above ground environment.
Source: Ahram Online
at March 14, 2017 No comments:

Archaeologists from Egypt and Germany found the massive eight-metre statue - believed to be of Ramsis II - submerged in ground-water in Cairo last week, and used a winch to recover it. Written By/ Nevine El-Aref.

In the wake of the discovery of a colossal statue assumed to be Ramses II in Cairo earlier this week, Egyptologist Zahi Hawass refuted local media reports that charged the use of a winch to haul part of the monument out of the pit it was found in damaged the artefact.

Hawass, a former antiquities minister, told Ahram Online that using a winch was “the only efficient way” to remove the 7-ton piece of the statue from the two-metre ditch. “Souq El-Khamis area in Matariya where the statue was discovered is a very important archaeological site which does not have any complete statues, tombs or temples,” Hawass said.

Initial reports by some Egyptian media outlets had suggested that the winch had damaged the statue, or had broken it into pieces. However, according to ministry officials, the statue was discovered already in pieces.

The discovery, hailed by the antiquities ministry as one of the most important ever, was made near the ruins of Ramses II's temple in the ancient city of Heliopolis, located in the eastern part of modern-day Cairo in the working-class neighbourhood of Matariya.

The site was subjected to deterioration and damage during Egypt’s Christian period because the area was used as a quarry for constructing other buildings, Hawass said. “It is impossible to find any complete full-sized statue,” Hawass said, adding that any statue that would be uncovered in the future will be found in pieces, like this one.

He argued that the Matariya area, a poor suburb of Cairo, suffers from three main problems. Its modern residential houses were built on top of the remains of ancient Egyptian temples and tombs which are submerged in subterranean water extended from two to four metres deep. “This is a fact that made it too difficult to transport or remove any of the blocks [from these structures].”

Hawass told Ahram Online that he called the German excavation mission head, Dietrich Raue, who sent him a complete report on the excavations with photographs revealing the lifting process. “The transportation and removal process of any heavy colossus like the one discovered is carried out in collaboration with the head of workmen from the upper Egyptian town of Qift who are skilled and very highly trained in such work,” Hawass said.

Hawass explained that similar workmen work in the Saqqara necropolis and belong to the El-Krity family, who have been able to transport and lift up a large number of huge sarcophagi and colossi that each could reach 20 tons.

Hawass also said that the newly discovered statue definitely belongs to the 19th dynasty king, Ramses II, because it was found at the entrance to his temple. He noted that the area, in which he had carried out excavations, held the remains of temples belonging to pharaohs Akhenaton, Thutmose III and Ramses II. “I am very happy to hear about such a discovery because it will not only reveal a part of ancient Egyptian history but it will also help promote tourism to Egypt,” Hawass said.
Source: Ahram Online
at March 12, 2017 No comments:

A quartzite colossus possibly of Ramses II and limestone bust of Seti II were discovered at the ancient Heliopolis archaeological site in Cairo. Written By/ Nevine El-Aref.

Egypt’s Minister of Antiquities Khaled El-Enany witnessed on Thursday the lifting of two newly discovered 19th dynasty royal statues from a pit at the Souq Al-Khamis district in the Al-Matariya area of greater Cairo.

The statues were found in parts in the vicinity of the King Ramses II temple in the temple precinct of ancient Heliopolis, also known as “Oun,” by a German-Egyptian archaeological mission.

Mahmoud Afifi, Head of the Ancient Egyptian Antiquities at the Ministry said that what has been found of the first statue is an 80cm tall bust of King Seti II carved in limestone with fine facial features.

The second statue was found in large pieces. It appears to have been 8 metres long and carved in quartzite.

"Although there are no engravings that could identify such a statue, its existence at the entrance of King Ramses II’ temple suggests that it could belong to him," Afifi told Ahram Online.

Aymen Ashmawy, Head of the Egyptian team on the mission described the discovery as "very important" because it shows that the Oun temple was enormous with magnificent structures, distinguished engravings, soaring colossi and obelisks.

Regretfully, he said, the temple suffered damages during the Graeco-Roman period, and most of its obelisks and colossi were transported to Alexandria and Europe.

During the Islamic era, the blocks of the temple were used in the construction of Historic Cairo.

At the site, El-Enany said the parts of the statue that appears to be associated with Ramses II will be transported to the Grand Egyptian Museum (GEM) for restoration and display when the museum opens.

El-Enany said the newly discovered artifacts would be placed, meanwhile, in a temporary exhibition at the Egyptian Museum.

Head of the German mission Dietrich Raue said excavations would continue in search of other statues and artefacts that could reveal more of the ancient sun city’s secrets.
Source: Ahram Online


For All New Discoveries Posts Click Here
at March 10, 2017 No comments: