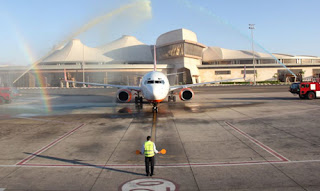 Egypt’s Hurghada has received the first flight operated by Swiss Chair Airlines from Zurich after a flight suspension that had been in place since March due to the coronavirus pandemic, a statement by the civil aviation ministry said on Sunday.
Egypt’s popular tourist resort towns Hurghada and Sharm El-Sheikh have been receiving more international flights in the past weeks, after the country reopened its airspace to regular flights in July.
Since the resumption of flights, foreign tourists in tour groups have been allowed entry into three coastal Egyptian governorates: Red Sea, Marsa Matrouh and South Sinai.
Egypt requires travellers arriving in the country to present a negative PCR test result certificate for the coronavirus. The test must be taken no more than 96 hours prior to arrival.
However, travellers entering Egypt at any of four airports in the Red Sea governorate and South Sinai can take a coronavirus test upon arrival.
Egypt hopes that the resumption of regular flights will boost its coronavirus-hit tourism sector, an essential source of foreign currency.
Source:ahramonline
at September 22, 2020 No comments:

According to Naglaa El-Kobrosly, director of the Antiquities Units in Egyptian Airport, a passenger was attempting to smuggle the 18th century religious object to Germany.
Source: Ahram Online
All Previous Recovered Artifacts Posts Here
at October 30, 2017 No comments:

The cave is thought to have been used by pilgrims and travelers. Written By/ Nevine El-Aref.

An Egyptian mission has stumbled upon a cave in Upper Egypt which contains Medieval-era Arabic graffiti. The cave was discovered during an archaeological survey carried out at the archaeological sites located in the area known as the Golden Triangle in the Red Sea governorate.

Deputy Minister of Antiquities Mohamed Abdellatif told Ahram Online that studies reveals that the cave was a rest house for pilgrims, traders and passengers who used it to protect themselves from the hot weather during their trips from Egypt to Mecca or Palestine.

During their stay in the cave, said Abdellatif, they carved graffiti on the walls, some of which remain while others have disappeared due to erosion.
The ministry is now studying the possibility of putting the cave on the official list of antiquities sites in an attempt to protect it, as well as restoring the texts.

Mohamed Tuni, an archaeologist at the governorate’s Islamic and Coptic Antiquities Department, said that the texts are composed of two sections. The first reads: "there is no God except Allah" while the second reads: "God has returned the poor slave Youssef Bin Hatem Al-Shati to his family in 755 of Hegira. May God have mercy on him and his parents and all the Muslims. Amen."

Tuni describes the texts as unique within the Golden Triangle area, which consists of the cities of Safaga and Qusseir at its base with the Upper Egyptian city of Qena at the top.
Source: Ahram Online
Find More About New Discoveries in Egypt Here