The Ministry of Antiquities is to start a restoration and rehabilitation project for Bab Al-Azab area in Mediaeval Cairo, the scene of Mohamed Ali Pasha's infamous massacre of the Mameluks. Written By/Nevine El-Aref.

The Permanent Committee for Islamic and Coptic Antiquities has approved a project for the restoration of Bab Al-Azab, part of a Ministry of Antiquities plan to restore and develop a series of monuments in Historic Cairo.

Mohamed Abdel Aziz, director-general of the Historic Cairo Rehabilitation Project, said that the Bab Al-Azab restoration project is to be executed in three phases over a 10-month period, with a grant from the American Research Centre in Cairo (ARCE). He explained that the first phase aims to consolidate the monumental structures of Bab Al-Azab, as well as removing the debris and garbage that has accumulated in the vicinity.

The project will include minor restoration work on the two doors of the Bab Al-Azab, along with its woodwork and windows. The blocks of the walls will be maintained and consolidated in an attempt to prevent erosion prior to the start of comprehensive restoration work. The second phase, Abdel Aziz said, includes the full scientific documentation of every structure of the Bab Al-Azab, as well as preparing a plan for its restoration. Studies to rehabilitate the site and bring it back into use will also be provided. The third and final phase consists of workshops and seminars to prepare a plan for the preservation of the buildings. This will involve the establishment of a group of young archaeologists and architects, especially from the local community, to ensure the preservation, maintenance and rehabilitation of the area and its historic structures.


Bab Al-Azab is the gate that once protected the original entrance to the Citadel. It was rebuilt in 1754 by Abd el-Rahman Katkhuda, from which the brass-bound wooden doors date. The gate witnessed the massacre of the Mameluks conducted by Mohamed Ali Pasha in 1811.
Source: Ahram Online
at October 29, 2017 No comments:

The Palace of Prince Omar Tosson in Cairo’s Road Al-Farag district is to be documented for the first time, reports Nevine El-Aref. 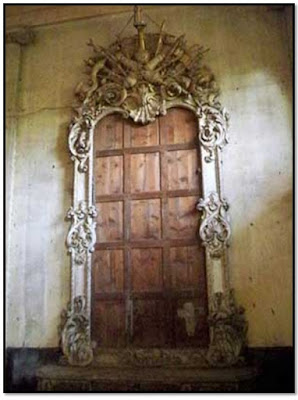 The palace was nationalised after the 1952 Revolution like other former royal palaces and buildings in Egypt, and it was converted into a secondary school. Subsequently it was badly neglected.

The palace was originally built after 1886 and comprises a basement and two upper floors. The basement has a long corridor leading to the Nile Corniche where a yacht was once docked to transport the prince on his journeys outside Cairo.

The first floor has a main hall with several chambers to host visitors, a library, dining rooms, bathrooms, kitchens and rooms for servants. The second floor houses the private rooms of the prince’s family and a special wing for him with separate bathrooms and side rooms.

The palace has two gardens, the first outdoors and the second indoors as a small winter garden. There is a small extension building once used for storage. The ceilings of the rooms in the palace are particularly distinguished, being carved in wood and bearing gilded decorative elements.

The palace was registered on Egypt’s Heritage List of Islamic and Coptic Antiquities in 1984, but it was still badly neglected. Several restoration projects were drawn up, but none was implemented.

However, all this is in the past, as today steps towards the palace’s restoration are being taken by the Ministry of Antiquities and Cairo University’s Construction Engineering Technology Laboratory.

Mohamed Abdel-Aziz, director of the Historic Cairo Rehabilitation Project, told Al-Ahram Weekly that the palace project aimed to document it using the latest technology and 3D laser scanning to analyse the architectural and decorative elements of the palace as well as its environment... READ MORE.
Source: Al-Ahram Weekly
at September 07, 2017 No comments:

News: 'Cairo Pass' Available For Foreigners to Visit all Archaeological Sites in Cairo And Giza

Egypt’s Ministry of Antiquities is now issuing visitor’s passes for foreigners to visit all archaeological sites and museums in Cairo and Giza Governorates. Written By/ Nevine El-Aref. 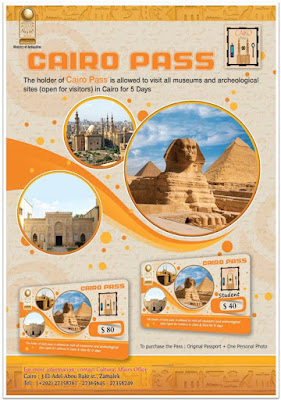 The “Cairo Pass” costs $80 for foreign tourists and $40 for foreign students, and provides access to Islamic, Ancient Egyptian and Coptic sites for unlimited visits over a five-day period, according member of the Technical Office of the Assistant Minister of Antiquities Mostafa Elsagheer.

Elsagheer says the move comes as part of the ministry’s efforts to promote archaeological sites and increase its financial resources.

The pass can be obtained at the Cultural Relations Department at the ministry headquarters in Zamalek, as well as at ticket outlets at the Giza Plateau, the Egyptian Museum in Tahrir and the Citadel of Salah El-Din.

Assistant of the Minister of Antiquities for the Development of Financial Resources Eman Zeidan explains that foreigners can obtain the pass by showing their passport or a student card with picture ID.

The first – which costs $200 for tourists and $100 for students – includes all sites and museums in Luxor including the royal tombs of Queen Nefertari and King Seti I.

The second category is half the price and includes all sites excluding the aforementioned royal tombs.

The Annual Visitors Pass, meanwhile, includes all open archaeological sites and museums across Egypt, with several options available. The first is for foreign diplomats and foreigners who work in international and multinational companies in Egypt. The annual pass costs $240 excluding the tombs of Queen Nefertari and King Seti I, and $340 including the two royal tombs.

The annual pass for Egyptians and Arab residents in Egypt to visit all the country’s sites and museums costs EGP 400, or EGP 100 for university students. School trips and Egyptians over 60 are allowed free entry.
Source: Ahram Online