Work on restoring the library of St Catherine's Monastery began in 2014. Written By / Nevine El-Aref. 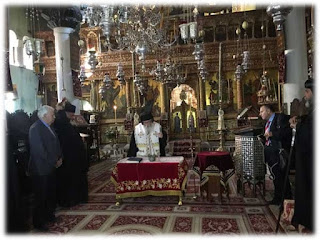 The opening ceremony was attended by a number of ministers along with members of parliament and ambassadors of foreign countries in Egypt, as well as representatives of Pope Tawadros II and Al-Azhar Grand Imam Ahmed Al-Tayeb.

El-Enany described St Catherine's as "a source of inspiration that radiated across civilisation, both regionally and globally." He added: "St Catherine's Monastery combines Judaism, Christianity and Islam. This is what we could call the genius of Egypt and its reflection on the harmony between its components and its great people." 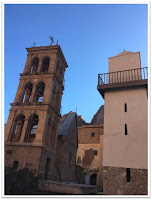 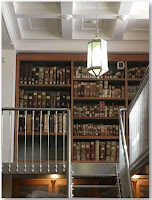 The monastery was registered as a world heritage site since 2002. "I would like to extend my thanks and appreciation to the distinguished audience and would also like to express my great gratitude to all those who contributed to this work and to your generous support,” El-Enany said.

“I am very happy to share in the inauguration of the restored library, which is the third library ever in the world,” Major General Fouda said in a press conference held at the monastery today.

Mohamed Abdellatif, assistant to the minister of antiquities and head of the Coptic and Islamic Antiquities sector at the ministry, told Ahram Online that conservation work was carried out under the supervision of the ministry with funds provided by the monastery. 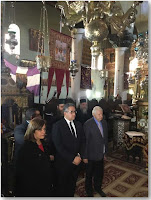 The restoration project began in 2014 after approval of the Permanent Committee of Islamic and Coptic Antiquities. It includes the development of the eastern side of the library, upgrading the architecture of the library facade as well as consolidating and conserving the Justinian Wall, which dates back to the 6th century AD.

Abdellatif pointed out that the ministry announced a month ago that during conservation work restorers uncovered the "Palmist" manuscript, which dates back to the fifth or sixth century AD.

It is a manuscript written on leather and shows medical texts from Hippocrates, as well as three other medical texts by an unknown writer. As for the Mosaic of Transfiguration, he explained that an Italian-Egyptian team headed by Italian expert Nardi Guviani carried out restoration of the Mosaic. 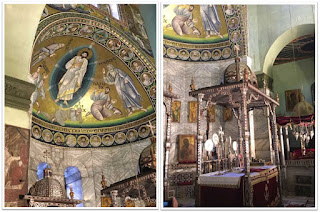 Ahmed Al-Nimr, a member of the Scientific Office of the ministry of antiquities, said that the mosaic is one of the oldest and most beautiful and largest mosaics in the Middle East. It dates to the ninth century AD. It covers a surface of about 46 square metres, painted with precious materials such as gold and silver.

The medical recipe uncovered is one of the renowned Greek physician Hippocrates. Written By/ Nevine El-Aref.

In a ceremony held at his ministry's headquarters, Minister of Antiquities Khaled El-Enany announced the discovery of a very important medical manuscript uncovered by the monks of St Catherine's Monastery in South Sinai during restoration works carried out in the monastery's library.

Mohammed Abdel-Latif, assistant minister of antiquities for archaeological sites, explained that the discovered manuscript is one of those known as "Palmesit" manuscripts, dating to the 6th century AD. The manuscript is written on leather and bears parts of a medical recipe of the renowned Greek physician Hippocrates.

The manuscript has also three other medical recipes written by an anonymous scribe, one of which contains drawings of medicinal herbs of the Greek recipe.

The second layer of writing found on the manuscript is a text of the Bible known as the "Sinaitic manuscript," which spread during the Middle Ages.

Ahmed Al-Nimer, supervisor of Coptic archeology documentation at the ministry, told Ahram Online that "Palmesit manuscripts" are a very well-known type of manuscript written on leather and formed of two layers. The first one, he explained, was previously erased in order to be re-written on the leather again. "This was done due to the high cost of leather at that time," Al-Nimr pointed out.

The monastery of Sainte Catherine's contains many "Palmesit" manuscripts in addition to a library containing 6,000 manuscripts, among them 600 manuscripts written in Arabic, Greek, Ethiopian, Coptic, Armenian and Syriac. They are mainly historical, geographical and philosophical manuscripts and the oldest dates to the 4th century AD.
Source: Ahram Online
at July 06, 2017 No comments: