The cave is thought to have been used by pilgrims and travelers. Written By/ Nevine El-Aref.

An Egyptian mission has stumbled upon a cave in Upper Egypt which contains Medieval-era Arabic graffiti. The cave was discovered during an archaeological survey carried out at the archaeological sites located in the area known as the Golden Triangle in the Red Sea governorate.

Deputy Minister of Antiquities Mohamed Abdellatif told Ahram Online that studies reveals that the cave was a rest house for pilgrims, traders and passengers who used it to protect themselves from the hot weather during their trips from Egypt to Mecca or Palestine.

During their stay in the cave, said Abdellatif, they carved graffiti on the walls, some of which remain while others have disappeared due to erosion.
The ministry is now studying the possibility of putting the cave on the official list of antiquities sites in an attempt to protect it, as well as restoring the texts.

Mohamed Tuni, an archaeologist at the governorate’s Islamic and Coptic Antiquities Department, said that the texts are composed of two sections. The first reads: "there is no God except Allah" while the second reads: "God has returned the poor slave Youssef Bin Hatem Al-Shati to his family in 755 of Hegira. May God have mercy on him and his parents and all the Muslims. Amen."

Tuni describes the texts as unique within the Golden Triangle area, which consists of the cities of Safaga and Qusseir at its base with the Upper Egyptian city of Qena at the top.
Source: Ahram Online
Find More About New Discoveries in Egypt Here

Many of the rock inscriptions date from the Predynastic Period (4,000-3,500BC) Written By/ Nevine El-Aref. 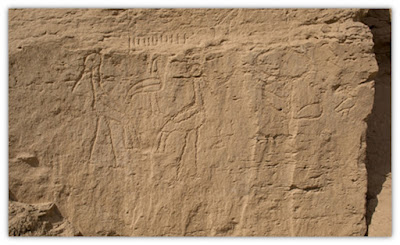 An archaeological mission from Yale University has discovered a new rock inscription site near the village of El-Khawy near Luxor, during their excavation work on the Elkab Desert Survey Project in collaboration with the Ministry of Antiquities.

The inscriptions range in date from the early Predynastic Period, which spanned approx. 4,000 to 3,500 BC, through to the Old Kingdom (approx. 2,686 BC to 2181 BC). The village of El-Khawy is located approximately 7km north of the ancient city of Elkab and 60km south of Luxor.

Mahmoud Afifi, head of the Ancient Egyptian Antiquities Section at the ministry explained that the site is composed of several panels of rock art and inscriptions which include some of the earliest—and largest—signs from the formative stages of the hieroglyphic script, and provides evidence for how the ancient Egyptians invented their unique writing system.

Hani Abu ElAzem, head of the Central Department of Upper Egypt Antiquities, described the discovery as important because it helps in understanding the development of a system of graphic communication, which sets the stage for the appearance of true hieroglyphic writing in Upper Egypt in approx. 3,250 BC. 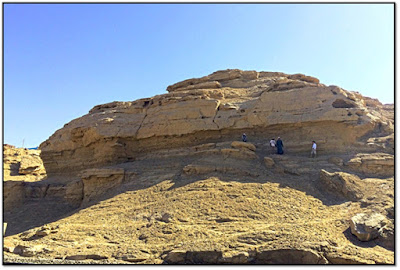 John Coleman Darnell, the head of the archaeological mission, said the inscriptions were discovered on high rock faces overlooking the modern railroad and the earliest one shows animal images—especially a herd of large elephants—some of which develop into symbols of political power associated with late Predynastic rulers. The most important inscription is found at the northern end of the site dates to the final phase of the Predynastic Period (the Naqada III phase or Dynasty 0, approx. 3,250-3,100 BC.)

He continued that the mission also discovered a panel of four signs, written right to left (the dominant writing direction in later Egyptian texts) featuring a bull’s head on a short pole, followed by two back-to-back saddle bill storks with a bald ibis above and between them. This panel is one of the largest yet discovered from Dynasty 0.

Darnell continues that rock art in the Eastern and Western deserts of Egypt demonstrates that ancient artists often interacted with earlier images—clustering similar images or images with related meanings on the same rock surface.

By the last phase of the Predynastic Period, rock art and other objects from the Nile Valley could use images to express concepts, such as the saddle bill stork with a serpent beneath its beak meaning “victory.” 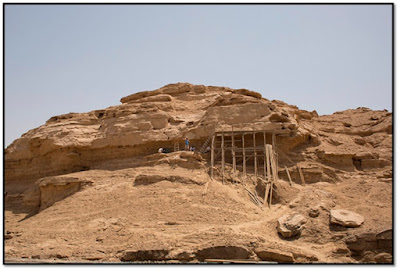 “These symbols are not phonetic writing, but appear to provide the intellectual background for moving from depictions of the natural world to hieroglyphs that wrote the sounds of the ancient Egyptian language,” Darnell said, adding that the newly discovered inscriptions at El-Khawy provide another example of this important transitional phase.

The team of archaeologists located these inscriptions by mapping out routes based on road networks in Egypt. Most rock inscriptions in Egypt, Darnell said, are not randomly placed; they are placed along major roads, either roads that parallel the Nile or roads that head out into the desert. They are usually at a juncture or crossroads. “Any place where someone might pause in their journey,” said Darnell.

Using a new recording technique pioneered at Yale, Darnell and Alberto Urcia, a digital archaeologist and associate research scientist in the Department of Near Eastern Languages and Civilizations, created a series of 3D images of the inscriptions from photographs taken in the field.

“This new technology makes it possible to record sites at a level of accuracy and detail that was absolutely impossible before,” said Darnell. “It also means that we can record the site as a place, or a location, and not just as a series of inscriptions.” “This was not what I was expecting to find when I set out on this period of work on the expedition,” said Darnell. “It was completely shocking to me.”
Source: Ahram Online