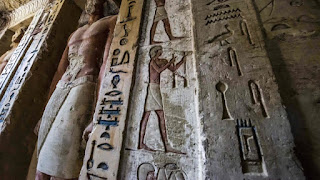 It’s windy, scorching hot and in the middle of the stretches of sand — is Saqqara, the ancient burial ground in Egypt. Wooden coffins with perfectly preserved mummies, bronze statues, caskets have all been excavated from the site over the years.
The area also has several pyramids, including the famous step pyramid of Djoser. In 2018, less than a kilometer away from this pyramid, archeologists discovered a 4,400-year-old tomb.
In Secrets of the Saqqara Tomb, we embark on this journey of excavation with a team of Egyptian archaeologists, anthropologists, doctors, Egyptologists, and an extremely hardworking bunch of diggers. They help uncover some of Egypt’s secrets which turn out to be one of the most significant archaeological finds of the century.
The main focus of the film is on deciphering the tomb: Who owned it? Who was buried in it, and why did the person need such a grand design? The ancient Egyptians wanted to have a fabulous afterlife, and believed that a spectacular tomb helped them go from a “secular creature to a sacred being”.
The tomb was usually decorated with scenes from an ideal life that they wished to enjoy for eternity.
Reading the Hieroglyphs on the walls, they note that it belonged to a priest called Wahtye.
The priest in that period was considered as the middleman between the king and the people, and between the king and his God. What follows is a detailed excavation of the shafts, surrounding areas searching for clues about Wahtye, his family and trying to understand how they died. 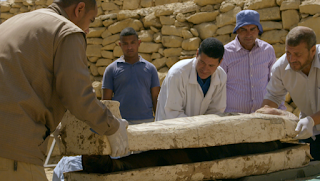 A doctor studying the bones of the Wahtye and his family noted that they could have died of malaria. If this can be proven right, it will be the first documented case of malaria in history.
More interesting and exciting than finding a mummified human is stumbling upon a mummified animal.
When Saqqara yielded a mummified animal — larger than a cat, smaller than a lynx — the researchers set to work. The results of the scans and studying the fur gave another shock to the team - it was a mummified lion cub, which was confirmed to be the first of its kind in history. This find could help tell more stories about the period’s religion, culture, and economy.
It’s not just a documentary about ancient Egypt and its history, as the viewers are up close with the tiring digging, moments of anticipation, and experiencing the sheer joy the findings bring. The short explainers by the team and accompanying illustrations help lay out the information the excavations have unearthed.
“We are the people who can best give voice to our ancestors… because they are our ancestors, we are one step closer to them than the foreigner,” an archaeologist says.
The people of the land telling their story, their history and their culture make Secrets of the Saqqara Tomb strike all the right chords.
It is a heart-warming story of life from the world of the dead.
Secrets of the Saqqara Tomb is currently streaming on Netflix.
Source:thehindu
at November 03, 2020 No comments: 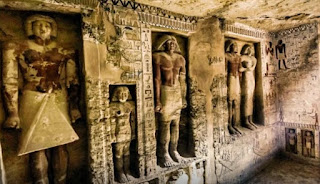 Egypt’s tourism and antiquities minster said on Saturday archaeologists have unearthed dozens of ancient coffins in a vast necropolis south of Cairo.
Khalid el-Anany said at least 59 sealed sarcophagi, with mummies inside most of them, were found that had been buried in three wells more than 2,600 years ago.
The Saqqara plateau hosts at least 11 pyramids, including the Step Pyramid, along with hundreds of tombs of ancient officials and other sites that range from the 1st Dynasty (2920 B.C.-2770 B.C.) to the Coptic period (395-642).
Mostafa Waziri, secretary general of the Supreme Council of Antiquities, said initial studies show that the decorated coffins were made for priests, top officials and elites from the Pharaonic Late Period (664-525 B.C.). 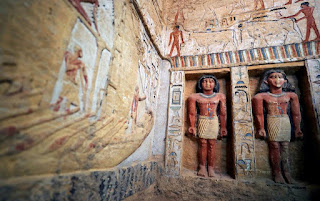 The Saqqara discovery is the latest in a series of archeological finds that Egypt has sought to publicize in an effort to revive its key tourism sector, which was badly hit by the turmoil that followed the 2011 uprising. The sector was also dealt a further blow this year by the global coronavirus pandemic.
“I consider this is the beginning of a big discovery,” el-Anany said, adding that there is an unknown number of coffins that have yet to be unearthed in the same area.
He spoke at a news conference at the famed Step Pyramid of Djoser in Saqqara where the coffins were found. The sarcophagi have been displayed and one of them was opened before reporters to show the mummy inside. Several foreign diplomats attended the announcement ceremony.
He said archaeologists also found a total of 28 statuettes of Ptah-Soker the main god of the Saqqara necropolis, and a beautifully carved 35 cm tall bronze statuette of god Nefertum, inlaid with precious stones. 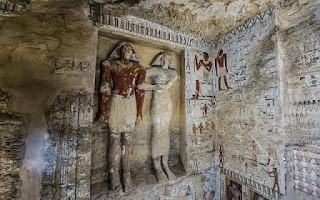 The name of its owner, Priest Badi-Amun, is written on its base, he said.
Egyptian antiquities officials had announced the discovery of the first batch coffins last month, when archaeologists found 13 of the containers in a newly discovered 11 meter-deep (36 feet) well.
El-Anany said the Saqqara coffins would join 30 ancient wooden coffins that were discovered in October in the southern city of Luxor, and will be showcased at the new Grand Egyptian Museum, which Egypt is building near the Giza Pyramids.

To Explore The Ancient City of Sakkara Click Here
at October 04, 2020 No comments: 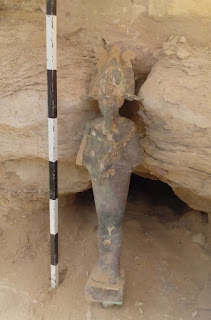 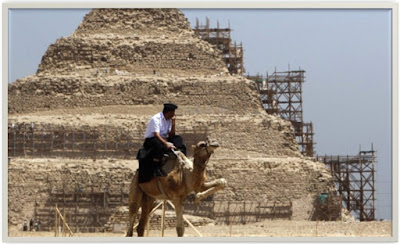 CAIRO: More than 90 percent of the restoration work at Djoser Pyramid, also known as the Step Pyramid, has been completed, the head of the Projects Sector at the Ministry of Antiquities, Waad Abul-Ela, said Tuesday.

The pyramid will be open to the public once maintenance works are approved. “We are also working on repairing the southern tomb,” Abul-Ela added.

Djoser Pyramid, located in Saqqara, Giza, was built approximately 4700 years ago. Archaeologists believe it was the first pyramid built in ancient Egypt and is now the oldest stone structure of its size in the world. It is 62 meters high and consists of six 'steps' built atop one another.