The newly appointed Japanese ambassador to Egypt visits the restoration project of Khufu’s second solar boat as the first archaeological site in his long tour list. Written By/ Nevine El-Aref. 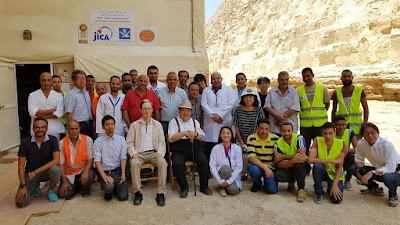 Ambassador Noke viewed the techninque which the Egyptian and Japanese archaeologists are using to lift up the boat’s wooden beams from its original location inside the pit to the surface, before transporting it to the site laboratory for restoration and consolidation.

Eissa Zidan, the head of the Restoration Department of the project, told Ahram Online that the Japanese archaelogist Sakuji Yoshimura, the head of the restoration team, explained to Ambassador Noke that "restoring the second solar boat of king Khufu was his dream to come true.'

Yoshimura said "the Japanese government, through the Japan International Cooperation Agency (JICA), had helped him realise his dream by supporting and financing the project." 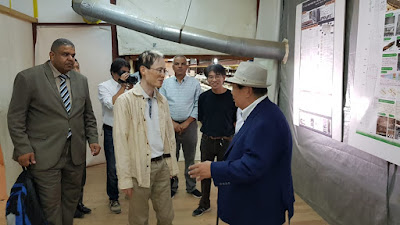 The JICA will continue its support of the project until the restoration and reconstruction of the boat is completed and the boat is readied to be on show at the Grand Egyptian Museum, which is scheduled to open in 2020.

Zidan told Ahram Online that the restoration team has so far succeeded in removing 866 pieces from the pit, and restored 840 pieces and transported around 700 pieces to the GEM’s restoration centre.

The first phase of the project began over 20 years ago. In 1992, a Japanese scientific and archaeological team from Waseda University, in collaboration with the Japanese government, provided a grant of $10 million to remove the boat from its original pit, restore and reassemble it, and put it on show to the public.

The team first cleaned the pit of insects then Japanese technicians inserted a camera through a hole in the chamber's limestone to assess the boat's condition inside the pit and the possibility of its restoration. 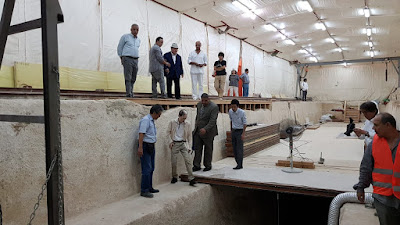 The team’s inspection showed that the second boat was in a much better state of preservation than the first one discovered in 1954. Khufu's first solar boat was discovered by the late architect and archaeologist Kamal El-Malakh, together with Zaki Nour, during routine cleaning on the south side of the Great Pyramid.

The first boat was removed piece by piece under the supervision of master restorer Ahmed Youssef, who spent more than 20 years restoring and reassembling the boat. The second boat remained sealed in its pit until 1987, when it was examined by the American National Geographic Society via remote camera.

After the space inside the pit was photographed and air measurements were taken, the pit was resealed. It was initially believed that the pit had been so well sealed thus the air inside must have been preserved since ancient Egyptian times. Sadly, though, Yoshimura pointed out that this was not the case, explaining that air had leaked into the pit from outside and mixed with the air inside and this had allowed insects to thrive and negatively affect some wooden beams.
Source: Ahram Online
at September 29, 2018 No comments:

JICA's Miyahara Chie paid a visit to the Grand Egyptian Museum's conservation laboratories and got an update on restoration work partly funded by the Japanese government. Written By/ Nevine El-Aref.

Miyahara Chie, the deputy director-general of JICA's Middle East and Europe Department, visited the GEM's conservation laboratories and was updated on work to restore the ancient wooden boat, a project that is partly funded by the Japanese government.

Eissa Zidan, supervisor-general of boat restoration work, told Ahram Online that Chie was very enthusiastic about the restoration project and hopes to see the craft reassembled and put on display at the GEM soon.

Two boats belonging to Pharaoh Khufu were discovered inside two pits in 1954 as Egyptian archaeologists Kamal El-Mallakh and Zaki Nour were carrying out routine cleaning on the southern side of the Great Pyramid of Giza.

After its initial discovery, the first boat was removed piece by piece under the supervision of restoration expert Ahmed Youssef, who spent more than 20 years restoring and reassembling it. The boat is now on display at Khufu’s Solar Boat Museum on the Giza Plateau.

The second boat remained sealed in the neighbouring pit until 1987 when it was examined by the American National Geographic Society in association with the Egyptian Office for Historical Monuments.

In 2009, a Japanese scientific and archaeological team from Waseda University headed by Sakuji Yoshimura offered to remove the boat from the pit, restore and reassemble it, and put it on show to the public. The launch of the project involved a $10 million grant from the Japanese government.
Source: Ahram Online
at January 28, 2018 No comments:

News, Giza: Exploring Egypt's Great Pyramid From The Inside, Virtually

A team of scientists who last week announced the discovery of a large void inside the Great Pyramid of Giza have created a virtual-reality tour that allows users to 'teleport' themselves inside the structure and explore its architecture. 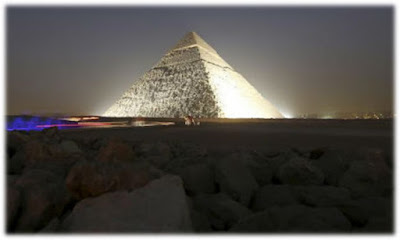 Using 3D technology, the Scan Pyramids Project allows visitors wearing headsets to take a guided tour inside the Grand Gallery, the Queen's Chamber and other ancient rooms not normally accessible to the public, without leaving Paris. "Thanks to this technique, we make it possible to teleport ourselves to Egypt, inside the pyramid, as a group and with a guide," said Mehdi Tayoubi, co-director of Scan Pyramids, which on Nov. 2 announced the discovery of a mysterious space inside the depths of the Pyramid.

The void itself is visible on the tour, appearing like a dotted cloud. "What is new in the world of virtual reality is that from now on you are not isolated but there are several of us, you're in a group, you can take a tour with your family. And you can access places which you usually can't in the real pyramid."

While partly designed as a fun experience, the "collaborative immersion" project allows researchers to improve the technologies they used to detect the pyramid void and think about what purpose it may have served. The pyramid, built in around 2,500 BC and one of the seven wonders of the ancient world, was a monumental tomb soaring to a height of 479 feet (146 metres). Until the Eiffel Tower was built in 1889, the Great Pyramid stood as the tallest manmade structure for more than 4,000 years. 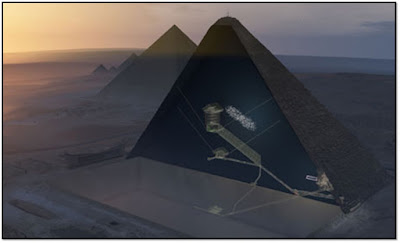 While there are passage ways into it and chambers in various parts, much of the internal structure had remained a mystery until a team from France's HIP Institute used an imaging method based on cosmic rays to gain a view inside. So-called muon particles, which originate from interactions with rays from space and atoms in Earth's upper atmosphere, are able to penetrate hundreds of metres through stone before being absorbed. That allows for mapping inside stone structures.

"Muon tomography has really improved a lot due to its use on the pyramid and we think that muography will have other applications in other fields," said Tayoubi. "But we also wanted to innovate and imagine devices to allow the wider public to understand what this pyramid is, understand it from within." When looking through their 3D goggles, visitors can see the enormous stones of the pyramid as if they were real, and walk virtually along its corridors, chambers and hidden spaces. As they approach the pyramid from the outside, the tour even includes audio of Cairo's deafening and ever-present traffic.

More News About Pyramid Scan Project
at November 09, 2017 No comments:

Egypt's Ministry of Antiquities said on Thursday that researchers in the ScanPyramids mission were mistaken in publicly announcing that they "discovered a new void space" inside the Great Pyramid of Giza before first discussing their findings with senior Egyptian and international Egyptologists, who have been commissioned by the ministry to study the issue. Written By/ Nevine El-Aref. 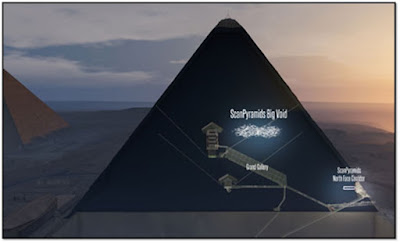 In an article published in the journal Nature on Thursday, an international team of researchers said they have found a hidden chamber in Khufu, the Great Pyramid of Giza.

The team said “the 30-meter (yard) void deep [they identified] within the pyramid is situated above the structure's Grand Gallery, and has a similar cross-section.The purpose of the chamber is unclear, and it's not yet known whether it was built with a function in mind.”

The researchers explained that they “made the discovery using cosmic-ray imaging, recording the behavior of subatomic particles called muons that penetrate the rock similar to X-rays, only much deeper.”

Mostafa Waziri, the secretary general of the Ministry of Antiquities, told Ahram Online that publishing the findings in an ongoing research by ScanPyramids project in a scientific  journal such as Nature Journal before discussing these findings with leading Egyptologists was a mistake.

“The findings of the ScanPyramids research project have to be first discussed scientifically among scientists and Egyptologists and then reviewed by the scientific committee, which was tasked by Egypt's ministry of antiquities to supervise research on the matter. This committee is led by renowned Egyptian Egyptologist Zahi Hawass with the participation of the well-known American Egyptologist Mark Lehner and Czech Egyptologist  Murslav Barta,” Waziri added.

“These experts have previously said that the existence of void spaces inside the pyramids is not a new thing and this is a well known fact among Egyptologists," Waziri said. “It was too early at this stage in their study to publish that there was a new discovery,” Waziri added.

An official Egyptian archaeologist, who requested anonymity, told Ahram Online that he believes the mission broke the Egyptian antiquities laws and regulations by announcing findings  to the media through video conference, and, therefore, might be barred by Egyptian authorities from continuing their research.

The accident occurred at the site where the ancient boat is being removed from its burial pit. Written By/ Nevine El-Aref.
A team of archaeologists and restorers were dispatched on Monday to the Giza Plateau to inspect work achieved at Khufu’s second boat project, and to investigate the condition of a damaged beam.

Since 2010, a Japanese-Egyptian team has been working to lift, restore and reconstruct the ancient boat, 4,500 years after it was buried as part of King Khufu's funeral rites. So far, 745 pieces of the 1,264 pieces of the whole boat have been removed from the excavation pit.

Ayman Ashmawi, the head of the Ancient Egyptian Department at the Ministry of Antiquities, told Ahram Online that the boat beam was damaged by accident when a crane malfunctioned, leading it to come into direct contact with a beam within the pit.

"A very small part of the beam was subjected to a very mild deterioration which does not have any impact on the beam itself and could be easily restored during the restoration work carried out by the efficient and skillful Japanese-Egyptian team," Ashmawi asserted, adding that his observation and the team escorted him during his inspection tour confirm the report submitted by the project team.

Ashmawi told Ahram Online that a committee from the Projects Department at the ministry is to be assigned to re-inspect the beam in order to make another report. He also said that the whole case is now under an administrative investigation in order to find out if there was any employee failure related to the incident.

Eissa Zidan, director-general of first aid restoration at the project, explained that the pit houses around 1,264 wooden beams in 13 different layers. The majority of the beams are in a very bad conservation condition while a minority are almost fully decomposed.

A total of 732 excavated pieces have so far been restored, Zidan said, and a collection of 560 pieces have been transported to the Grand Egyptian Museum overlooking Giza plateau.

There are plans to lift and restore all the beams in an attempt to reconstruct the boat and put it on display beside the first boat discovered in 1954 by Egyptian historian Kamal El-Malakh and restored by well-known restorer Ahmed Youssef.
Source: Ahram Online
at August 22, 2017 No comments: