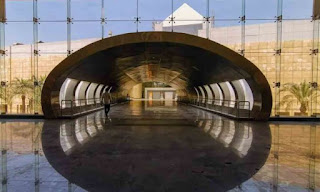 Egypt's Minister of Tourism & Antiquities Khaled el-Enany visited the National Museum of Egyptian Civilization in Fustat, in Old Cairo.
The museum is located on an area of ​​135 thousand square meters.
Enany visited the museum in order to follow up on the progress of work there in preparation for receiving the Royal Mummies Parade from the Egyptian Museum in Tahrir.
Enany also reviewed the work that is currently in full swing to equip the central exhibition gallery and the mummies gallery in preparation for their opening.
He checked the museum’s multimedia display, which is an integral part of the museum’s display scenario.
It relies on the dazzling display of content that paves the way for visitors to enter the museum’s most important gallery: The gallery of the Royal Mummies. 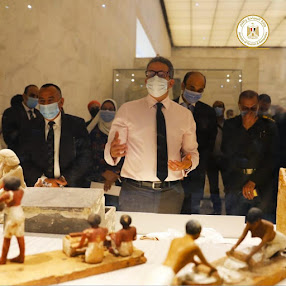 Furthermore, Enany was accompanied by Director of the National Museum of Egyptian Civilization Ahmed Ghoneim, Secretary General of the Supreme Council of Antiquities Mostafa Waziri, Head of the Museums Sector Moamen Othman, Adviser to the Minister for Museums Display Scenario Ali Omar and members of the committee.
During the visit, Enany instructed the staff to make some adjustments in the way some artifacts are displayed and rearranged them according to the museum's display scenario, in addition to adding some pieces to enrich the museum’s display.
At the end of the visit, Enany held two meetings with the members of the museum’s display scenario committee, during which he discussed the display scenario of the artifacts in the National Museum of Egyptian Civilization, the Administrative Capital Museum in the City of Culture and Arts in the New Administrative Capital, and the Grand Egyptian Museum.
The project of the National Museum of Egyptian Civilization will play a big role in introducing visitors to the various aspects of Egyptian civilization throughout history, with its manifestations of the richness and diversity of the Egyptian civilization from prehistoric times to the modern era, through its unique collections.
Source:egypttoday
at November 16, 2020 No comments: