Okasha said that offering texts are engraved on the ruins, as well as a female name of the king's family.

Okasha said that excavation work is ongoing to reveal more of the pyramid's secrets.

Earlier this week, an Egyptian mission from the Ministry of Antiquities uncovered remains of the pyramid.

Okasha says that the structure is composed of a corridor leading to the inside of the pyramid, a hall leading to a southern ramp, and a room at the western end.

An alabaster block measuring 15cm by 17cm has been found in the corridor, engraved with 10 vertical hieroglyphic lines that are still being studied.

A granite lintel and a collection of stony blocks showing the interior design of the pyramid have also been uncovered.
Source: Ahram Online
Find More About Dahshur Discoveries  Here
at April 06, 2017 No comments:

Archaeologists have revealed a portion of the pyramid's internal structure, described as being in very good condition. Written By/ Nevine El-Aref.

The remains of a 13th Dynasty pyramid have been discovered by an Egyptian archaeological mission working in an area to the north of King Snefru's Bent Pyramid in the Dahshur Necropolis.

Mahmoud Afifi, the head of the ancient Egyptian antiquities sector at the antiquities ministry, announced the find, adding that the remains are in a very good condition and further excavation will take place to reveal more of the structure. 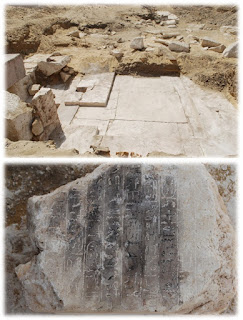 Adel Okasha, director general of the Dahshur Necropolis, explained that the portion of the pyramid uncovered so far shows a part of its inner structure.

This structure is composed of a corridor leading to the inside of the pyramid and a hall that leads to a southern ramp, as well as a room at the western end, he said.

An alabaster block measuring 15 cm by 17 cm was also found in the corridor, engraved with 10 vertical hieroglyphic lines that are still being studied.

A granite lintel and a collection of stoney blocks showing the interior design of the pyramid have also been uncovered.

Further studies will be conducted to identify the owner of the pyramid and the kingdom to which it belongs.
Source: Ahram Online
Find More About New Discoveries in Egypt Here
at April 04, 2017 No comments:

Bulldozers from a neighbouring quarry had entered the Dahshur necropolis site. Written By/ Nevine El-Aref. 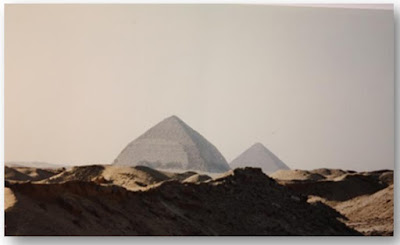 After two days of violations, the Dahshour necropolis, where the both pyramids of King Senefru are located, has been restored to its former state.

Alaa El-Shahat, head of the Administrative Centre for Antiquities in Cairo and Giza, told Ahram Online that in collaboration with the Tourism and Antiquities Police, Cairo Governorate, the army forces and General Security, the Ministry of Antiquities has succeeded in removing all recent encroachments made on the archaeological site and its safe zone.

Three days ago, El-Shahat said, bulldozers from a neighbouring quarry entered the Dahshur necropolis site, which is located around 40km south of Cairo.

The ministry has removed the encroachments and the police have caught the criminals who violated the archaeological sites.

The ministry, he continued, will also build a long wall to separate the archaeological site from the neighbouring quarry as well as establishing a small security unit of the Tourism and Antiquities Police in the area adjacent to the quarry in order to prohibit any future encroachment onto the site.
Source: Ahram Online
For All Related Posts About Dahshur Necropolis Site  Click Here
at February 10, 2017 No comments: