An analysis of 12 ancient papyrus fragments has revealed some surprising details about how the Egyptians mixed their red and black ink – findings which could give us a lot more insight into how the earliest writers managed to get their words down on the page.
We know that ancient Egyptians were using inks to write at least as far back as 3200 BCE.
However, the samples studied in this case were dated to 100-200 CE and originally collected from the famous Tebtunis temple library – the only large-scale institutional library known to have survived from the period.
Using a variety of synchrotron radiation techniques, including the use of high-powered X-rays to analyse microscopic samples, the researchers revealed the elemental, molecular, and structural composition of the inks in unprecedented detail.
"By applying 21st century, state-of-the-art technology to reveal the hidden secrets of ancient ink technology, we are contributing to the unveiling of the origin of writing practices," says physicist Marine Cotte from the European Synchrotron Radiation Facility (ESRF) in France.
The red inks, typically used to highlight headings, instructions, or keywords, were most likely coloured by the natural pigment ochre, the researchers say – traces of iron, aluminium, and hematite point to this being the case.More intriguing was the discovery of lead-based compounds in both the black and the red inks, without any of the traditional lead-based pigments used for colouring.
This suggests the lead was added for technical purposes.
"Lead-based driers prevent the binder from spreading too much, when ink or paint is applied on the surface of paper or papyrus," the team writes in their study.
"Indeed, in the present case, lead forms an invisible halo surrounding the ochre particles."
As well as explaining how the ancient Egyptians kept their papyrus smudge-free, it also suggests some pretty specialised ink manufacturing techniques.
It's likely that the temple priests who wrote using this ink weren't the ones who were originally mixing it.
"The fact that the lead was not added as a pigment but as a drier infers that the ink had quite a complex recipe and could not be made by just anyone," says Egyptologist Thomas Christiansen, from the University of Copenhagen in Denmark.
"We hypothesise that there were workshops specialised in preparing inks."
Interestingly enough, the preparation of red ink inside a workshop has also been mentioned in a Greek document dated to the third century CE, backing up the idea of specialised ink mixing in Egypt and across the Mediterranean.
This technique of using lead as a drying agent was also adopted in 15th century Europe as oil paintings began to appear – but it would seem that the ancient Egyptians discovered the trick at least 1,400 years earlier.
The researchers are planning more tests and different kinds of analysis, but what they've found so far is already fascinating – another example of how modern-day scientific instruments can unlock even more secrets from the past, even down to coloured ink.
"The advanced synchrotron-based microanalyses have provided us with invaluable knowledge of the preparation and composition of red and black inks in ancient Egypt and Rome 2,000 years ago," says Christiansen.

Source:sciencealert
at November 01, 2020 No comments:

News: Lead-based Inks Were Used as Driers in Ancient Egypt. 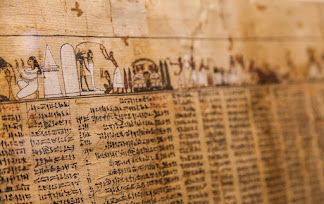 Anew study conducted by the University of Copenhagen (UCPH), Denmark has discovered that lead compounds in red and black inks were present in the 12 samples of Egyptian papyri analysed by them. Papyrus is a material that was prepared in ancient Egypt and used for writing or making ropes.
As per a report in the Science Daily, the researchers were surprised to find these two elements in papyri. They believe that the inks were used for their drying properties and not as pigments.
Using advanced synchrotron radiation-based X-ray microscopy equipment, researchers investigated the red and black ink present in the 12 samples.
Speaking about the research, UCPH’s Thomas Christianse, an Egyptologist who is also the first author of this paper, said that papyri fragments are taken from the Tebtunis temple library and the inks that have both lead-based and iron-based compounds.
Sine Larsen, a Chemistry professor at UCPH and co-author of this study, informed that while iron-based elements are found in red inks, lead-based compounds are present in both the inks.
She added, “Since we did not identify any of the typical lead-based pigments used to colour the ink, we suggest that this particular lead compound was used by the scribes to dry the ink rather than as a pigment.”
This new study is significant in understanding the use of inks as driers in ancient times.
A previous study on 15th-century European oil paintings had given similar results. In that as well, the application of lead-based drying technique was discovered to make the paintings.
It is established that Egyptians must have discovered the drying properties of the lead-based compounds 1,400 years earlier than Europeans.
The report says that it has been established earlier that in Egypt, inks were used as early as 3200 BC to write text.
Black ink was used to write the body while red ink was used as a highlighter, marking heading and keywords.
Source:news18
at October 27, 2020 No comments: