The colossus of Ramses II was unveiled at Luxor Temple as part of Ministry of Antiquities celebrations of the World Heritage Day. Written By/ Nevine El-Aref. 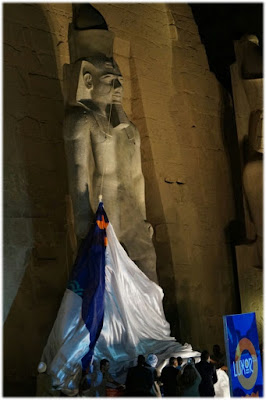 Ministry of Antiquities celebrations of World Heritage Day extended to Luxor as Minister of Antiquities Khaled El-Enany and Luxor Governor Mohamed Badr inaugurated a new display at Luxor Museum after the transfer of 122 artefacts from the King Tutankhamun collection at the Grand Egyptian Museum.

Elham Salah, head of the museums sector at the ministry, said that the new display includes of 186 artefacts that were recently discovered by an Egyptian archaeological mission at Draa Abul Naga necropolis on Luxor’s west bank. The objects include a collection of ushabti figurines (statuettes), painted mummy masks, anthropoid sarcophagi jewelleries, and a beautifully carved statuette of Isis Nefret, the singer of the god Amun.

El-Enany and Badr then went to Luxor Temple to unveil the colossus of King Ramses II after restoration. Mostafa Waziri, secretary general of the Supreme Council of Antiquities, explained that the colossus once adorned the façade of Luxor Temple but collapsed during a destructive earthquake in antiquity.

He continued that the restoration and reconstruction of the colossus took almost six months in collaborate with the Engineering Authority of the Armed Forces and Luxor Governorate who provided the restoration material required.

Waziri added that the statue was found broken into 14 blocks of different sizes. The largest two were the head of the statue and the base, representing 40 per cent of the original colossus. The colossus is carved in black granite and weighs 65 tons at a height of 11.7 metres. It depicts Ramses II standing wearing the double crown, his left leg in front of him.

Ahmed Orabi, general director of Luxor Temple, said that the colossus was found during excavation works carried out by Mohamed Abdel Kader in 1958 to 1960, which also uncovered other colossi.

This colossi is the second to be restored by the Ministry of Antiquities. The first was completed last year. It is carved in black granite, weighs 75 tons and stands at a height of 11 metres. It depicts Ramses II wearing the double crown, his left leg in front of him. Beside him stands a 1.5 metre statue of his wife, Queen Nefertari.
Source: Ahram Online
at April 27, 2018 No comments:

The King Ramses II colossus at the GEM is now in its permanent place of display, 11 years after being removed from Cairo's Ramses Square. Written By/ Aymen Barayez.

It appears that the sun is greeting King Ramses II after the transportation of his colossus to its permanent place of display in the atrium of the Grand Egyptian Museum (GEM).

Today, the sun sent its rays to lighten the face of the king, 11 years after the colossus was removed from Cairo's Ramsis Square and transported to the GEM.
Source: Ahram Online

The colossal statue of the pharaoh arrived at its new resting place to the sounds of the national anthem. Written By/ Nevine El-Aref.

The colossus of Ramses II arrived safely at its new display area in the atrium of the Grand Egyptian Museum on Thursday, in preparation for the museum’s soft opening later this year. The statue had been being stored in another part of the GEM, and the 400-metre journey to its permanent resting place was marked with ceremony. Senior officials were in attendance, and the statue was preceded on its jourey by 11 Egyptian horsemen in ceremonial military dress. As it reached its final location, the national anthem was played.

Thursday’s trip was the fourth time that the colossus of the great king, who ruled from 1279–1213 BC, has been moved.  The first trip took place 3,000 years ago; the statue was carved in an Aswan quarry and then taken to Mit Rahina archaeological site in the Memphis necropolis, to be displayed as part of the façade of Ptah’s temple. In 1955, president Gamal Abdel-Nasser decided to move the statue to Bab Al-Hadid (now Ramses Square) in Cairo, as part of an initiative launched by the minister of governmental affairs, Abdel-Latif El-Boghdadi, to beautify the streets and squares of Cairo. The third relocation was in 2006 when former minister of culture, Farouk Hosni, decided to move the statue from Ramses Square to the headquarters of the GEM to protect it from pollution.

The relocation process was carried out in collaboration with the Engineering Authority of the Armed Forces and the Arab Contractors Company, which was responsible for the previous move in 2006.  Antiquities Minister Khaled El-Enany said that over the past three months the statue has been intensively studied to assess its condition before transportation. Safeguarding procedures have been put in place, and the foam rubber covering the statue has been replaced with stronger material and weak points consolidated.

El-Enany added that the whole process has cost about EGP 13.6 million, including packing and unpacking the statue and preparing the road. Mohsen Salah, chairman of the Arab Contractors Company, told Ahram Online before the move that the statue would be transported in at iron cage, wherein it would be hung like a pendulum to allow it to move freely during the 400-metre journey. Tarek Tawfik, supervisor general of the Grand Egyptian Museum, said that the museum is expected to be fully open totally in 2022, but its soft opening will be at the end of this year.

The museum, located on the Giza Plateau, will feature an atrium, a grand staircase, and the Tutankhamun hall. The golden king’s whole collection will by put on show for the first time; it includes 5,200 artifacts. The partially broken colossus of Ramses II was discovered at Mit Rahina archaeological site in 1820 by the Italian adventurer Giovanni Caviglia, along with another similar one that remains on site. Caviglia tried to move it to Italy but he was unable to because of its 83-tonne weight. Mohamed Ali decided to offer the statue to the British Museum in London but the offer failed for the same reason. The statue stood in its place at Mit Rahina until it was eventually transferred to Ramses Square.
Source: Ahram Online
All Grand Egyptian Museum Related Posts Click Here
at January 25, 2018 No comments: