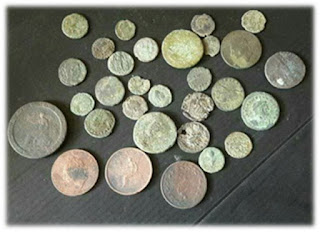 The archaeological unit at Alexandria Port, in cooperation with the customs department, succeeded in foiling an attempt to smuggle 30 archaeological coins out of Egypt on last Wednesday. Written by/ Nevine El-Aref.

According to Hamdy Hamam, head of the Central Administration of Seized Antiquities Units at the Ministry of Antiquities, customs officials reported the discovery of the coins to the port's archaeological unit, which in turn assigned an archaeological committee from Alexandria's Graeco-Roman Museum to inspect their authenticity.

The committee then verified the authenticity of the coins and seized them according to Egypt’s Antiquities Law No. 117 of 1983 and its amendments. The tombstone, which was found at the Al-Abd archaeological site, is decorated with scenes and inscriptions on a flat background representing the facade of an ancient Egyptian temple. Written By/ Nevine El-Aref.

An Egyptian archaeological mission has unearthed the remains of several Greco-Roman tombs, including a "distinguished" tombstone, in the eastern cemetery of the ancient city of Alexandria.

The archaeologists made the finds at the Al-Abd site, which falls within the Hellenistic cemetery, located on Alexandria's sea shore.

Mostafa Waziri Secretary-General of the Supreme Council of Antiquities said that the remains include a collection of offering vessels, and lamps decorated with scenes of Ancient Egyptian and Greco-Roman deities.

“But the most important item of this discovery is a very distinguished tombstone that was once used to close one of the cemetery's burial shafts,” Waziri told Ahram Online.

He explained that the tombstone is decorated with scenes and inscriptions made of a mixture of sand and lime on a flat background representing the facade of an ancient Egyptian temple. The scenes depict a staircase leading to the entrance of the temple and two columns holding up the entrance’s roof. The staircase leads to a set of double doors, one of which is half-open and bears a winged sun-disk decoration, he said. 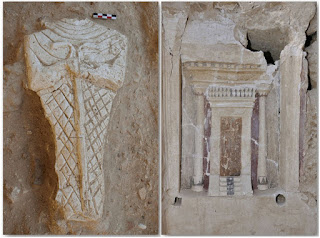 Ayman Ashmawy, head of the Ancient Egyptian Antiquities Sector, said that this tombstone is an evolution of the idea of a false door to mislead thieves, drawing them away from the real door of the tomb. The false-door idea was widespread in Ancient Egypt.

The newly discovered tombstone, which was in a poor condition, is now undergoing restoration. The Al-Abd site is located within the eastern cemetery of the ancient city of Alexandria, which contains a number of burials dating back to the Hellenistic era.
Source: Ahram Online
Explore Alexandria City From Here &
For All Related Posts of New Discoveries Click Here
at January 11, 2018 No comments: 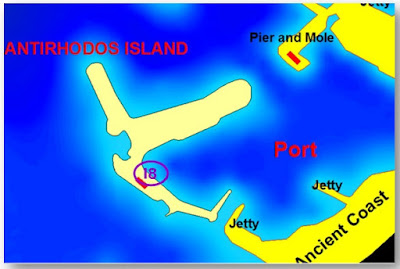 Three Roman shipwrecks and an ancient Egyptian votive bark to the god Osiris were discovered earlier this week on the Mediterranean seabed near the Egyptian city of Alexandria, along with a collection of smaller Artifacts. Written By/ Nevine El-Aref. 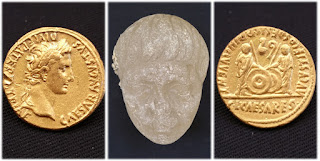 Osama Al-Nahas, head of the Underwater Archeology Department at the ministry, explained that the eastern harbour still hides many treasures, and that evidence suggests a fourth shipwreck could yet be identified during the mission's next archaeological season in 2018.

The evidence, he told the Ahram Online, consists of large wooden beams and remains of pottery vessels, which may have been the cargo of a fourth ship.

In September the mission began its archaeological survey of the sunken city of Heraclion, which is located under Abu Qir Bay. The mission has also continued the restoration of those objects recovered from the seafloor during their previous archaeological seasons.
Source: Ahram Online
Explore Alexandria City From Here &  For All Related Posts of New Discoveries Click Here

An Egyptian archaeological mission from the Ministry of Antiquities has uncovered five Roman tombs during excavation works carried out in Beir Al-Shaghala site in Dakhla Oasis in Egypt's Western Desert.

Ayma Ashmawi, head of the Ancient Egyptian Antiquities Department, explained that the tombs are built in mud brick and have different architectural style.

The third tomb is a pyramid-shaped tomb. The mission has succeeded in uncovering its upper part while the lower part is still buried in sand.

The fourth and fifth tombs share one entrance and each tomb has a separate burial chamber with a vaulted ceiling. Ashmawy pointed out that the mission's excavations in the area will continue.

Gamal Al-Semestawi, general director of antiquities of the Middle Egypt, said that a number of artifacts were found inside the tombs, including the remains of a funerary mask depicting a human face painted in yellow, a set of pottery vessels of different shapes and sizes, as well as two ostraca, one of which contains hieroglyphic text while the second bears text written in Hieratic.

A clay incense burner and remains of a small sandstone sphinx, 14 centimetres by 12.7 centimetres tall, have also been found within the tombs.

Magdi Ibrahim, director general of Dakhla Oasis and head of the mission, said the mission succeeded in its six previous excavation seasons to discover eight Roman tombs in a good state of conservation and with similar architectural design. They are composed of a rectangular hall and two side chambers with sandstone vaulted ceilings. The hall has a mud brick ceiling.

Al-Shaghala area is located to the west of Mout city almost 3 kilometres from Dakhla Oasis in a mid-point between three other archaeological sites.
Source: Ahram Online

For More Details About  Dakhla Oasis Click Here
For All New Discoveries Posts Click Here
at August 24, 2017 No comments: 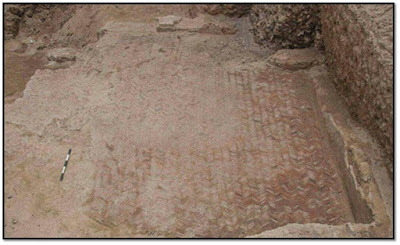 An Egyptian archaeological mission uncovered a Roman floor mosaic during excavation work in the Moharam Bek district of Alexandria. Written By/ Nevine El-Aref.

An Egyptian archaeological mission from the Ministry of Antiquities uncovered a Roman floor mosaic during excavation work at the Hend area in the Moharam Bek district of Alexandria.

Aymen Ashmawi, the head of Ancient Egyptian Antiquities Section, explained that the floor mosaic is unique in Egypt but similar mosaics have been found in several areas in Rome, including the Baths of Trajan and Hadrian’s Villa. He said that the floor was in good condition.

Mostafa Roshdi, director of Alexandria and West Delta Antiquities, said that excavation work is continuing at the site in order to reveal more parts of the mosaic floor, and that comprehensive studies will be carried out on it. 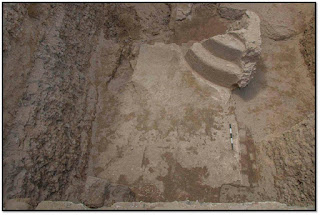 Mohamed Farouk, director of Middle Alexandria Antiquities Department, told Ahram that the newly discovered floor bears an opus spicatum design which was well-known during the Roman period and used in the construction of the floors of baths and fortresses.

Egyptologist Mohamed Abdel-Aziz said that the Hend area was once home to workshops, and a large number of glass and clay ovens have been uncovered.

Minister of Antiquities Khaled El-Enany has visited the site and given the go-ahead to continue the excavations and uncover more parts of the floor.
Source: Ahram Online

Explore Alexandria City From Here &  For All Related Posts of New Discoveries Click Here
at July 16, 2017 No comments: