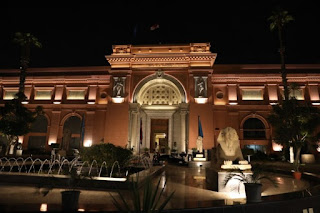 Egypt celebrated late on Tuesday the 118th anniversary of the establishment of the Egyptian Museum in downtown Cairo.
Held at the museum in Tahrir Square, the celebration was attended by Egyptian Tourism and Antiquities Minister Khaled al-Anany, government officials and a number of foreign envoys, including the Chinese ambassador to Cairo Liao Liqiang.
The celebration witnessed the opening of two exhibitions at the museum.
During the event, al-Anany delivered 100 ancient coins that belong to China, Saudi Arabia and India.
“This is the second time that the Egyptian government returned smuggled cultural relics to the Chinese government,” Liao told Xinhua.
He also congratulated al-Anany for the major discoveries that have been made in Egypt recently. 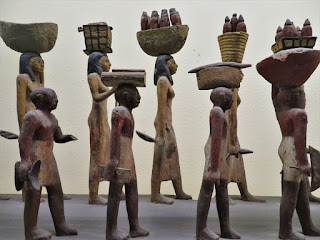 Al-Anany said in a speech that the main artifacts at the Egyptian Museum will remain, except the collection of King Tutankhamen and the renowned Royal Mummies, which will be permanently displayed at the under-construction Grand Egyptian Museum (GEM) and the National Museum of Egyptian Civilization in Cairo.
Over the past few years, the Ministry of Tourism Antiquities has been moving a lot of its unique artifacts to the GEM near the Pyramids Plateau in Giza.
“The Egyptian Museum will never die, even after the transfer of Tutankhamen collections and the Royal Mummies to other museums,” Mostafa Waziri, secretary-general of Egypt’s Supreme Council of Antiquities, told Xinhua.
Sabah Abdel-Razek, director-general of the Egyptian Museum, said that the museum is going through an all-out development process to restore its original historical character. 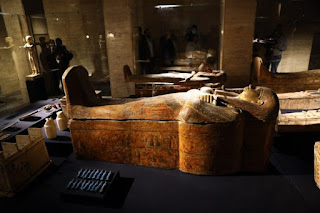 “We are currently working to restore its original shape and color … we are also developing the exhibition halls,” she told Xinhua.
“We have a complete development plan for the museum that will be carried out soon in cooperation with major international museums.”
The two-storey museum was built during the reign of Khedive Abbas Helmi II in 1897 and opened for visitors in mid-November 1902.
The ground floor is specified for featuring heavy monuments such as large statues, coffins, wall inscriptions and others, while the upper floor showcases drawings, small statues, ancient tools, in addition to the complete set of ancient King Tutankhamen’s artifacts.
Source:africa.cgtn
at November 19, 2020 No comments: