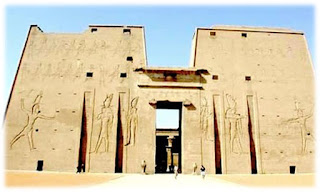 The two temples will close an hour later during the winter due to lower River Nile water levels, which delay the arrival of cruise boats. Written BY/ Nevine El-Aref.

The Ministry of Antiquities is to extend the official opening hours of the Edfu and Kom-Ombo temples in Aswan during the winter months, starting on Saturday.

Mostafa Waziri, Secretary-General of the Supreme Council of Antiquities, told Ahram Online that the decision was taken in cooperation with the governorate of Aswan in response to the delayed arrival of cruise boats at both temples due to a drop in water levels on the River Nile. The move also reflects the ministry’s keenness to provide high-quality services to tourists, he said.


The opening hours for the Edfu temple will be extended to 5 pm every day, instead of 4 pm. The temple at Kom-Ombo, meanwhile, will remain open until 9 pm, instead of 8 pm.
Source: Ahram Online
Find More About Kon Ombo Temple Here &  Edfu Temple Here
at January 08, 2018 1 comment: