Structures consist of two large mudbrick buildings surrounded by vast open courtyards and workshops. Excavation of an ancient Egyptian site has found evidence of beer and bread-making in a newly discovered building complex. 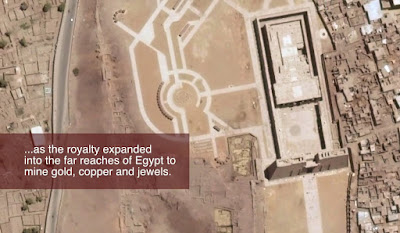 The city of Tell Edfu, located around 400 miles south of Cairo in the Nile Valley, has been explored by archaeologists for the past 16 years. At the end of 2017, researchers from the University of Chicago found a complex of buildings that marked the earliest point of the town’s occupation. They dated from around 2400 BCE – the so-called “Old Kingdom” period of ancient Egypt, when the great pyramids were built.

The structures consist of two large mudbrick buildings surrounded by vast open courtyards and workshops. “It’s a wonderful find because we have so little information about this era of settlement in the southern provinces,” said Professor Nadine Moeller, an Egyptian archaeology specialist who co-led the excavation.  “We don’t know any such similar complexes for the Old Kingdom.”

The excavation uncovered storage containers and other artifacts in the workshops that suggested the towns inhabitants had been brewing beer and making bread on the site. There was also evidence for copper smelting in the complex, which the archaeologists think was built to provide accommodation for important officials sent to oversee the mining of precious minerals from the eastern deserts.

Underneath the floors of the buildings the archaeologists discovered stamps marked with the name, in hieroglyphs, of an official who led a group of prospectors to mine for the pharaoh Djedkare-Isesi – the penultimate rule of Egypt’s Fifth Dynasty. “It’s just about this time that the Egyptian royalty, until then focused on the northern area directly around the capital Memphis, began to expand its reach after a period of contraction during the fourth and much of the fifth dynasties,” said Professor Moeller.

The use of Edfu as a departure point for expeditions to the east was further confirmed by the presence of shells from the Red Sea and rare imported ceramics from the ancient civilization of Nubia, in what is now Sudan. “This is a first sign that the ancient city of Edfu was evolving into an important departure point for large expeditions leaving for the Eastern desert regions, and possibly the Red Sea shore, located about 125 miles to the east,” Professor Moeller added.

The researchers also said the building may have had religious or cult ties, given their proximity to the temple of the falcon god Horus.  “It’s such a unique site. We’ve had a hard time finding architectural parallels, because no other settlement in Upper Egypt has such extensive remains from this time period,” said Professor Moeller. “We’ve learned so much at Tell Edfu, and there’s still more to come.”
Source: Independent UK

For Reading All Related Posts of New Discoveries Click Here
at February 11, 2018 No comments: