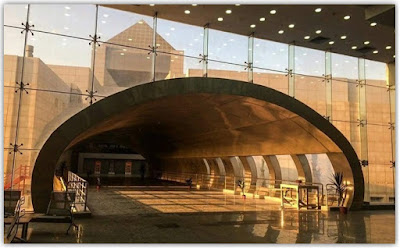 The newly opened museum is located in the heart of Al Fustat, housing between its walls 50,000 artefacts and the ancient natural lake of Ain Basira.

The museum is located in the ancient Fustat city, the location of the original city of Cairo, behind the famous Amr Ibn El Aas Mosque, according to the Museum's recently launched Facebook page.

The 25-acre state-of-the-art establishment, which just opened to the public last Wednesday, is designed by Egyptian architect El Ghazzali Kosseiba. It is currently showcasing 50,000 historical pieces that narrate the development of Egyptian civilization since the dawn of time. 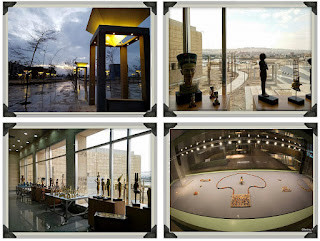 It also includes on its premises the ancient Ain Basira natural lake.

Entry and photography is free for everyone until the end of February, after which entry will be set at EGP 30 for Egyptians and EGP 60 for foreigners.

Here are some stunning pictures from the opening of the museum.
Check out the NMEC on Facebook.
Source: Cairo Scene

A temporary exhibition on the development of Egyptian crafts through the ages is marking the soft opening of the new National Museum of Egyptian Civilization in Cairo. Written By/ Nevine El-Aref.

Overlooking the Ain Al-Sira Lake in the heart of Egypt’s first Islamic capital of Al-Fustat stands the National Museum of Egyptian Civilisation (NMEC) with its pyramid-shaped roof. After six years of delay due to budgetary constraints in the aftermath of the 25 January Revolution, the NMEC was partially inaugurated this week with the opening of a temporary exhibition relating the history and development of Egyptian crafts through the ages.

As Al-Ahram Weekly went to press Prime Minister Sherif Ismail was scheduled to officially inaugurate the exhibition along with UNESCO Director-General Irina Bokova and Minister of Antiquities Khaled El-Enany. Although the work at the NMEC has been proceeding according to the schedule drawn up with UNESCO in 2002 when the foundation stone was laid, construction was put on hold after the revolution.

The museum was originally to be opened in July 2011. Owing to the revolution and funding problems, the opening was delayed. Over the past six years work proceeded slowly, but by 2014 all the construction work had been completed, including the galleries, corridors and exhibition sections as well as labs and storage galleries. Despite still showing some concrete underlay, the building’s floors and staircases are now encased in grey marble and the lighting and security systems all installed.

However, budgetary issues have still prevented the total completion of the museum and its opening to the public. To overcome such obstacles, El-Enany suggested creating a temporary exhibition hall to put on show some of the museum’s planned exhibits to encourage tourism to the NMEC and provide the required funds to open the whole museum.

Over the last six months work on the two levels hosting the temporary exhibition “Egypt’s Crafts through the Ages” has been at full swing to meet the opening deadline. Workers have been organising artefacts inside showcases, while others have been inserting graphics on the theme of the exhibition design. Curators have been fixing labels on each display.

“I am very happy and proud to say that a part of my dream has now come true,” El-Enany told the Weekly, referring to this week’s partial opening. He added that between 2014 and 2016 he had been honoured to have been the supervisor of the NMEC project.

“In this capacity, I have seen first-hand the hard work and dedication of the museum staff and the ministry employees in making the museum’s debut exhibition a reality and a successful one at that. I take this opportunity to thank them for all their hard work,” El-Enany said, explaining that the newly opened exhibition was only a sampler of many more exciting endeavours to come.

“I hope every visitor will enjoy the exhibition and stay tuned to all of the NMEC’s future projects,” he said. The exhibition, El-Enany added, embodied what the NMEC as a museum and an institution aims to highlight: the material culture of a long-standing, diverse and advanced civilisation. It reflects both the continuity of traditions and the innovation of technologies in Egypt.

El-Enany said that the chosen crafts for the new exhibition were particularly relevant to the museum’s surrounding area, which has long been a hub of woodworking, textile production, jewellery making and pottery manufacturing. “Although the inauguration marks the opening of a single temporary exhibition to the public, the NMEC is a much larger entity than that, with rich galleries covering a plethora of themes in addition to being an extensive scientific research centre and cultural hub,” El-Enany said.

He announced that in order to celebrate the NMEC’s soft opening, the museum would offer admission to visitors free of charge beginning on 16 February and continuing through the end of the month. Photographs and videos for TV channels would be free of charge in the same period, he said.

“Craft production in Egypt has a long and rich history that over time has been continuously refined, incorporating new techniques and raw materials to create a treasure trove of exquisite masterpieces, many of which survive to this day,” Mahmoud Mabrouk, the exhibition designer, told the Weekly.

He said that the choice of crafts for the first temporary exhibition held at the NMEC boded well, with the location of the museum in Al-Fustat being known for its rich tradition of crafts. The area around the museum hosts a centuries-old pottery production community, and pottery producers and vendors line the main streets leading to the Museum.... READ MORE. 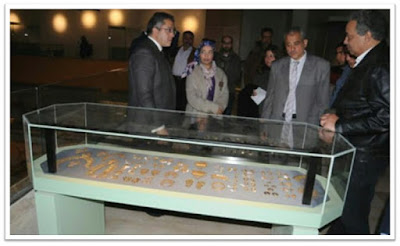 The museum's soft-opening will showcase "Crafts and Industries through the Ages" in Egypt, offering free admission 16-28 February. Written By/ Nevine El-Aref.

Under the name "Crafts and Industries through the Ages" the National Museum of Egyptian Civilization (NMEC) is set to open its first temporary exhibition Wednesday evening, showcasing the history of four crafts in Egypt: clay, jewellery, textiles and wood. The opening will be attended by UNESCO Director-General Irina Bokova.

On a tour of the exhibition Monday, Egypt's Minister of Antiquities Khaled El-Enany told Ahram Online that to celebrate the NMEC's soft opening the museum will offer free admission from 16 through 28 February. Mahmoud Mabrouk, the exhibition's designer, said the museum will showcase a collection of 400 artefacts selected from Cairo's Egyptian Museum, Coptic Museum, Museum of Islamic Civilization and Al-Manial Palace Museum, as well as Alexandria's Jewellery Museum and NMEC storage.

Final preparations for Wednesday's opening are currently underway. "The exhibition will bring to life the continuation and development of ancient crafts into modern times through graphics, multimedia electronic guides and a documentary screening," Mabrouk said.

The most important artefacts, Mabrouk said, will be a collection of prehistoric clay pots, the royal chair of Hetep-Heres, mother of King Khufu, and a small ancient Egyptian stool carved from 120 wooden pieces. A Qabbati robe textile and set of Islamic doors decorated with foliage and geometric designs with ivory are also among the distinguished items to be displayed, along with jewellery from Siwa, Nubia, Upper and Lower Egypt.

Saeed Mahrous, NMEC Supervisor-General told Ahram Online "This exhibition is a step toward the NMEC’s third and final stage along the road to opening; it includes the museum’s 23,000 square metre exhibition hall.” “The exhibition will be organised by the chronology and geography of the artefacts,” Saeed added.

Plans to create the NMEC began in 1982 and construction finished in 2009. In 2000 a location on Lake Ain Al-Sira in Fustat was selected and in 2002 the large, square foundation stone — the platform of the building's stylised pyramid design — was installed.

When it opens fully to the public, the museum will display a collection of 50,000 artefacts from different eras in Egyptian history from the pre-dynastic through the modern age. The site houses a number of high-tech storage galleries, as well as a state-of-the-art security system, much like its counterparts the British Museum in London and the Louvre in Paris.
Source: Ahram Online
More About National Museum of Egyptian Civilization Click Here
at February 14, 2017 1 comment:

Our Treasures Abroad, Brussels: 35,000 Year-Old Axe to Return to Egypt After Studies

The Louvain University in Belgium handed over a 35,000 year-old axe to the Egyptian Embassy in Brussels after studies. Written By/ Nevine El-Aref.

After the completion of archaeological and scientific studies, the Louvein University in Belgium handed over a 35,000 year-old axe to the Egyptian Embassy in Brussels. The axe will arrive in Egypt within days.

Shaaban Abdel Gawad, the supervisor-general of Antiquities Repatriation Department, said the axe is carved in stone and was discovered by the Louvain mission along with a human skeleton in Nazlet Khater archaeological site in Sohag in Upper Egypt.

The Luvein mission took both the skeleton and the axe to Belgium for studies. The skeleton returned to Egypt in August 2015. Abdel Gawad said that the axe is one of the oldest skeletons ever found in Egypt.

It goes back to the Old archaic era around 35,000 years ago. It also shows the development of human species that lived in Egypt throughout different eras.