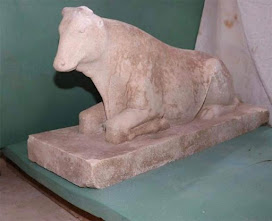 Major archaeological finds in Egypt continue to be unearthed and this one involves an entire elite family burial tomb. Archaeologists have found a new ancient Egyptian pharaonic tomb, belonging to an important royal official, that is roughly 2,500 years old. The recently unearthed Egyptian pharaonic tomb includes the graves of family members and a trove of important funerary artworks and grave goods .
The team of Egyptian archaeologists made a remarkable discovery while excavating a site in the al-Ghuraifah antiquities area in central Egypt. This is their fourth season digging in the area, which was once a necropolis, and today is known as Tuna el-Gebel. They have already made several important finds at the location including a limestone coffin of the high priest of Djehuty, Egyptian god of the moon and wisdom. The recent Egyptian pharaonic tomb discovery in Tuna el-Gebel is one of the most important finds in Egypt this year, because the tomb has not been looted by robbers, unlike so many finds of the past.
Mostafa Waziri, Secretary-General of the Egyptian Supreme Council of Antiquities told Albawaba.com that the team found a burial area that “consists of a 10-metre deep burial well that leads to a large room with niches carved into the rock. 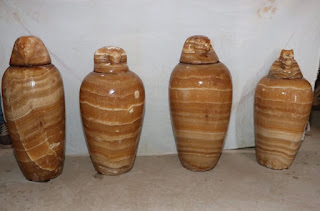 The well or shaft is lined by regularly shaped stone blocks.
It was reported by the Egyptian Ministry of Tourism and Antiquities in a Facebook post that the experts had found “The tomb of the supervisor of the royal treasury , ‘Badi Eset’.” His name is also written as Badi Est or Pa Di Eset in some sources.
*Egyptian Elite Sarcophagi and Unique Gold Treasures Unearthed.
*Tomb of Kaires the ‘Keeper of the Secret’ and the Pharaoh’s ‘Sole Friend’ Unearthed in Egypt.
*Making Copper Look Like Gold: 1,400-Year-Old Moche Graves Reveal Rich Artifacts of Ancient Elite.
As supervisor of the royal treasury, Badi Eset would have been one of the most powerful men in Egypt at that time, with immense influence in royal society. Essentially, Badi Eset would have been in charge of the personal wealth of the pharaoh. His responsibilities would have included the safekeeping of the treasury and the upkeep of the pharaoh’s household and palaces.
Badi Eset’s Egyptian Pharaonic Tomb Was Full of Grave Goods.
The ancient pharaonic tomb was dated to the Late Period of Egyptian history, which is the era from the 26 th to the 30 th dynasty.  Also found in the tomb were two beautiful limestone statues.  One is in the shape of the Apis calf, a sacred bull, which was worshipped in Memphis.
The other statue is of a woman, possibly a goddess. The figures are in a remarkable state of preservation. 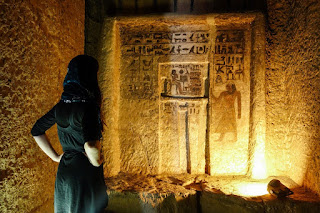 “A canopic vessel was also found, made of alabaster in the form of the four sons of Horus,” according to the Egyptian Independent. This is a sealed jar that usually contained the viscera of the deceased. The Facebook page of the Ministry of Tourism and Antiquities quoted Mr Wazari as saying that the canopic jars, made of limestone, are “some of the most beautiful jars that have been found.
These were funerary figurines and they were interred with the dead so that they could act as servants in the afterlife.
The tomb also contained nearly 1000 Ushabti figurines made of tin-glazed pottery. Some amulets including many scarabs were also unearthed in the tomb, which are believed to have been used to help the deceased in the afterlife.
And a set of pottery vessels, possibly kitchen utensils, were also found in the Badi Eset tomb.
The tomb of the supervisor of the royal treasury also included the sarcophagi of members of Badi Eset’s family.
The Ministry of Tourism and Antiquities Facebook page reports that “Also, 4 stone sarcophagi were found” in the Egyptian pharaonic tomb. They are all intact and still sealed with mortar.
This is an exciting find, and it may indicate that more intact burials are waiting to be discovered.
The discovery of the tomb of Badi Eset and the sarcophagi of his family is a unique opportunity for researchers to understand Late Period Egypt funerary customs and they may provide insights into elite social relations in this period. According to the Ministry of Tourism and Antiquity’s Facebook page “there is still more to uncover and treasures to reveal in El-Ghorefa.” Excavations are continuing at the site.
Source:ancient-origins
at October 27, 2020 No comments: 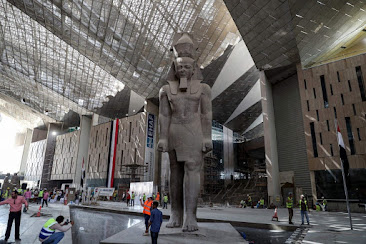 Egyptian Prime Minister Mostafa Madbouly on Saturday conducted an inspection tour of the Grand Egyptian Museum project at Giza.
He was briefed on the project’s recent construction work and the development of the surrounding areas.
Madbouly then addressed the workers, saying “You contribute towards building a scientific, cultural, and tourist monument, and the state is not only buildiing a museum, but also a grand compound of Egyptian civilization.”
The prime minister stressed that all preemptive measures against the coronavirus must be applied in all sites of the project, with full adherence to sterilization measures  so that workers are protected.
Minister of Tourism Khaled al-Anany presented a brief on the museum, set to be located on an area of 500,000 square meters.
He explained that the visitor path will begin by entering from the Cairo-Alexandria desert road to the museum’s main entrance in front of the Egyptian Obelisk Square. There, visitors will be greeted with the museum’s majestic façade and the “wall of the pyramids”  600 meters wide and 45 meters high.
The museum itself is made up of two main blocks, Anany said, namely the museum building on the left on an area of 92,623 square meters and the conference center on the right on an area of 40,609 square meters,connected by the entrance hall where the statue of King Ramses II is located.
The conference center will consist of a large multi-use hall for conferences and theater, and a 3D film theater with a capacity of 500 individuals, in addition to rest areas and a garden for VIP visitors, a cultural center containing ten classes, two halls for lectures and another hall for computers.
The project’s supervisor Atef Moftah said that engineering  work is over 97 percent complete, and construction has been completed at 100 percent.
Source:egyptindependent
at October 24, 2020 No comments: