Egypt's Tourism and Antiquities Police has recovered six Khedivate-era lamps that were stolen late December from the El-Refai Mosque in Cairo’s El-Khalifa district, with the culprits behind the theft arrested earlier this week, the Ministry of Antiquities said on Tuesday. 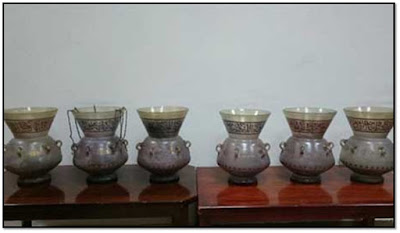 El-Saeed Helmy, head of Islamic and Coptic Antiquities Department at the Ministry of Antiquities, told Ahram Online that a committee of archaeological experts has confirmed the recovered lamps’ authenticity.

Mona Ahmed, a restorer at the Museum of Islamic Art who specializes in glass artefacts, told Ahram Online that the lamps are in good condition, and that they bear the rank of Khedive Abbas Helmy II, who ruled Egypt and Sudan from 1892 to 1914.

The Tourism and Antiquities Police say that the people who stole the lamps were working with a film crew that was shooting inside the mosque.

The police arrested two suspects, one of whom is an antiques dealer, while a third is at large. Police say the suspects intended sell the lamps for EGP 900,000. Helmy says the six lamps were among 15 adorning the ceilings of the mausoleums of King Fouad and Princess Ferial at El-Refai Mosque.

The lamps, which date to 1910, are made of glass adorned with a Quranic verse written in Mameluke raised script. “Allah is the Light of the heavens and the earth. The example of His light is like a niche within which is a lamp,” says the verse from the Surat An-Nur.

Helmy says the lamps were recovered quickly due to the swift action by the antiquities ministry, which was quick to report the theft, and that the minister of antiquities has taken measures to prevent similar thefts in the future.
Source: Ahram Online
All Previous Recovered Antiquities Posts Here
at January 25, 2017 No comments: 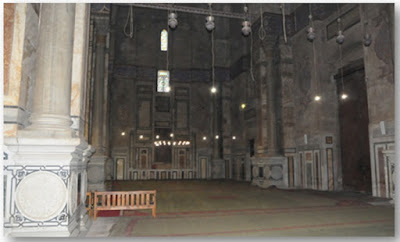 Egypt's Minister of Antiquities Khaled El-Enany headed on Monday an inspection tour of the mausoleums of King Fouad and Princess Feria at central Cairo's Al-Refai mosque, following the robbery on Sunday of six Islamic lamps that decorated the sites. Written By/ Nevine El-Aref.

During the inspection, El-Enany said that the Ministry of Antiquities would be collaborating closely with the Ministry of Religious Endowments to ensure the highest level of protection for artifacts in Egypt's historical mosques.

El-Enany told Ahram Online that the mausoleums where the lamps were stolen are not used for prayers and are home to a number of historical artifacts. He said they should therefore be managed by the Ministry of Antiquities rather than the religious endowments ministry. 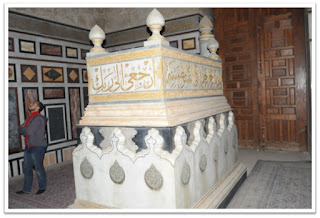 The Prosecutor-General's office is currently investigating the theft and questioning employees from the ministries of antiquities and religious endowments.

Alsaeid Helmy, head of Islamic and Coptic Antiquities at the ministry, said that a committee assigned Sunday to conduct an inventory of the mosque's artifacts has begun its work.

Helmy added that one of the stolen lamps has been replaced with a replica until the real ones can be recovered.

The stolen lamps date to 1911 (1328 Hegira), and are made of thick glass decorated with a Quranic verse from the Surah An-Nur written in Mameluke raised script.

The verse says: “Allah is the Light of the heavens and the earth. The example of His light is like a niche within which is a lamp.”
Source: Ahram Online

The lamps date to 1910, constructed out of glass with Quranic verse from the Surah An-Nur written in Mameluke raised script. Written By/ Nevine El-Aref.

Six Islamic lamps that decorate the ceilings of the mausoleums of Egypt’s King Fouad and Princess Ferial at Al-Refai mosque in Cairo were stolen Sunday, an official at the Supreme Council of Antiquities said.

Secretary General of the council Mostafa Amin told Ahram Online the Ministry of Antiquities "learned of the theft today and has begun a full investigation to find the lamps and the person(s) responsible for their theft."

Alsaeed Helmy, Head of Islamic and Coptic Antiquities at the ministry, said that six out of 15 lamps were stolen from the mausoleums. The lamps date to 1910, and are made of glass decorated with a Quranic verse from the Surah An-Nur written in Mameluke raised script.

The verse says: “Allah is the Light of the heavens and the earth. The example of His light is like a niche within which is a lamp.”. Minister of Antiquities Khaled El-Enany has referred the case to the General Prosecution for investigation, Amin said.

The case has also been referred to the Tourism and Antiquities Police as well as the Ministry of Endowments, which is responsible for both mausoleums, for assistance in recovering the lamps. Amin added that El-Enany ordered the formation of a committee to carry out an inventory of all the artefacts that reside in the mosque.

The Al-Refai mosque is the resting place of many members of the Egyptian Royal Family, including the last monarch, King Farouk. The last Shah of Iran was also buried in the mosque in 1980.
Source: Ahram Online
at January 03, 2017 No comments: