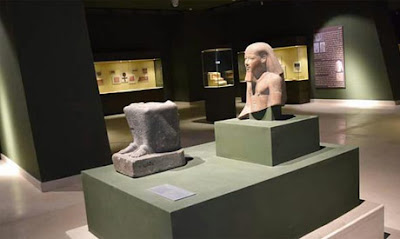 It seems that the curse of the Pharaohs that has hovered over the Sohag National Museum for more than 29 years will finally be broken as the museum is set to open its doors overlooking the Nile in the Upper Egyptian town of Sohag in the coming days. Written By/ Nevine El-Aref.

Since its launch in 1993, the museum has ground to a halt several times due to disagreements over technical issues and interior design as well as over its exhibits and a lack of funds after the 25 January Revolution. In 2016, work resumed on the museum, and it is now scheduled to open next week.

The museum is in the shape of a two-storey Ancient Egyptian temple overlooking the Nile with a dock for ferries and exquisite landscaping dotted with water channels and fountains. Five colossi of the lion goddess Sekhmet stand before the museum’s entrance to welcome visitors.

“The Sohag National Museum [SNM] is not just a regional museum that the Ministry of Antiquities is opening in an Upper Egyptian province, but is part of the country’s strategy to give attention and care to the Upper Egyptian governorates and to develop their resources,” Minister of Antiquities Khaled El-Enany told Al-Ahram Weekly. He added that the completion of the museum was a dream come true and the result of a promise by the ministry to Sohag and its inhabitants. 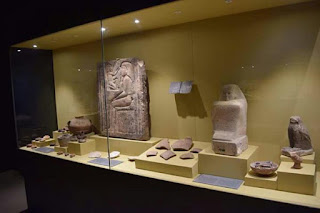 Sohag has rich archaeological sites from the early Ancient Egyptian era right up to the Ptolemaic, Graeco-Roman, Coptic and Islamic periods. But although the governorate contains many distinguished monuments and historical landmarks, it is seldom visited.

To promote the governorate’s archaeological sites and encourage tourists to pay a visit to its monuments, El-Enany said the Ministry of Antiquities had been accelerating efforts to complete the museum as a mirror reflecting Egypt’s history. A comprehensive plan had been launched to develop sites in Sohag and to make the area more tourist-friendly as well as to continue to preserve and conserve them.

Elham Salah, head of the Museum Sector at the Ministry of Antiquities, told the Weekly that the aim of the museum was not only to reflect the unique history of the governorate from pre-history to modern times, but also to highlight Egyptian identity through the changes that had taken place in Upper Egypt.

The exhibition scenario focuses on six influential aspects of Egyptian life throughout the ages: kingship, the family, cooking and cuisine, faith and religion, employment, industry and textiles and handicrafts. 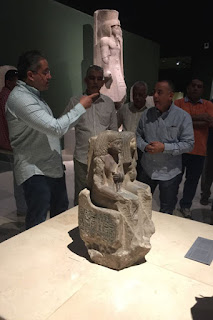 The museum displays a collection of 945 artefacts, most of them unearthed in different sites near Sohag and the rest having been carefully selected from the Egyptian Museum in Tahrir Square in Cairo, the Museum of Islamic Art in Cairo’s Bab Al-Khalq neighbourhood, the Textiles Museum in Al-Muizz Street in Historic Cairo and the Coptic Museum in Old Cairo.

They include clay pots with handles and small bases and a collection of jars and painted clay lamps of different shapes and sizes. Also selected was a collection of paintings showing scenes of a woman standing inside a domed doorway and a man on the banks of the Nile. A small Persian manuscript relating the traditional love story of Qays ibn Al-Mulawah and Layla in seventh-century Arabia, known as Layla and Al-Majnun, is also among the selected objects and features 18 coloured illustrations.

Pieces of fabric decorated with faience ceramic beads, the remains of children’s linen robes, and a rectangular piece of the Kiswa, the cloth draped over the Kaaba in Mecca, are also in the collection. It is designed to display pieces that represent the traditions, customs, industry and handicrafts of the area, including traditional costumes and jewellery..... READ MORE.
Source: Ahram Online
More About Sohag Click Here
at August 13, 2018 No comments:

Email ThisBlogThis!Share to TwitterShare to FacebookShare to Pinterest
Labels: Sohag 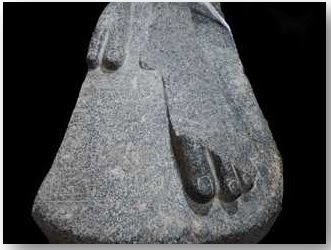 The Ministry of Antiquities announced the discovery of an artifact in a parking lot in Akhmim, Sohag governorate, during a drilling operation to develop the site.

The ministry said in a statement on Monday that the archaeological committee, which was formed under the chairmanship of Gamal Abdel Nasser, confirmed that the piece found in the parking is an official historical artifact.

The discovered piece is part of a black granite statue of King Amenhotep III from the Eighteenth Dynasty, said Abdel Nasser.

On his right foot, are hieroglyphic writings which represent the coronation and birth names of King Amenhotep III, he added. The artifact was transferred to Sohag Museum for restoration.
Source: Egypt Independent
Find More About New Discoveries in Egypt Here
at January 09, 2018 No comments:

The Tourism and Antiquities Police caught the suspects conducting the illegal excavation red-handed and have confiscated the house until the completion of investigations, according to Hani Abul Azm, the head of the Central Administration for Antiquities of Upper Egypt.

Abul Azm added that the block may have been part of King Nectanebo II's royal shrine or an extension of a wall of a temple built by the king. Nectanebo II is well-known for his construction projects in Abydos. Abul Azm said that after the completion of the expropriation procedures, more excavation will take place at the site.

Ashraf Okasha, director-general of Abydos Antiquities, pointed out that the newly discovered block measures 1.40x40 cm, but the high level of subterranean water has made it difficult to determine whether it was part of a shrine or a temple wall.

Okasha added that the archaeological committee inspected the site at the two-storey mud brick house where the illegal excavation was underway, with the block discovered at the bottom of a four metre-deep hole.
Source: Ahram Online
Related Posts of New Discoveries Click Here  & More About Sohag Click Here
at May 21, 2017 No comments: