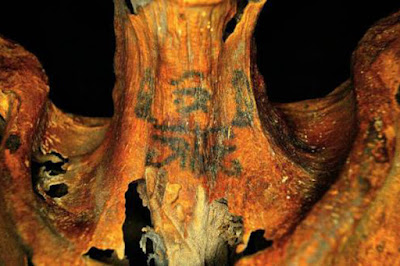 The mummy is currently stored in tomb TT 291 in Luxor so it can be maintained in an environment similar to which it had been stored for millennia. More studies and research will be carried out in an attempt to reveal the name and position of the tattooed mummy.
Source: Ahram Online
You Can Find All Previous New Discoveries Posts Here
at October 23, 2018 No comments:

Described for the first time, the 4,000-year-old "rabbit's warren" represents one of the largest groupings of Middle Kingdom burials. 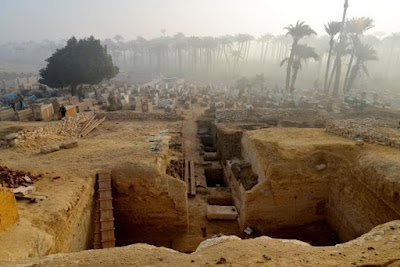 For thousands of years, a necropolis has been lurking under the desert near the village of Lisht in Egypt, just south of Al Ayyat. Located at the edge of the Sahara, the ancient cemetery is no secret; today, a pair of pyramids rises above the landscape in the north and south of the burial grounds.

But many of the site's ancient tombs have long been concealed under feet of sand—until now.

In just a single field season, a joint expedition between the University of Alabama-Birmingham and the Egyptian Ministry of Antiquities mapped out a whopping 802 tombs at Lisht. These newly described tombs date back roughly 4,000 years and were previously unknown to Egyptologists, according to an announcement from Khaled El-Enany, Minister of Antiquities, and Mostafa Waziry, Secretary General of the Supreme Council of Antiquities.

“What we have at the site is one of the largest corpuses of Middle Kingdom tombs in the entire country of Egypt,” says archaeologist Sarah Parcak, a National Geographic Explorer and professor at the University of Alabama at Birmingham who co-led the expedition with Adel Okasha, Director of the Pyramids Region.

While the tombs were largely looted before the expedition started work, they still offer many insights into the lives of the people who once bustled in the ancient city nearby, believed to have been the Middle Kingdom capital of Itj-Tawy.

Much of what we know so far about Lisht during this period comes from extensive excavations conducted since the early 1900s by researchers with the Metropolitan Museum of Art. Per museum policy, Met curator Adela Oppenheim declined to comment directly about the new research. But she notes that artifacts from this period seem to reflect a greater awareness of the human condition, which is part of what makes the Middle Kingdom so fascinating.

Met teams have primarily focused their efforts on documenting and mapping the two pyramids—built for the kings Amenemhat I and Senusret I—as well as the surrounding royal tombs. But there's still much more to learn from the rest of the site's resting places.

“From this area, there really aren't very many tombs that are known, except for the royal tombs there,” says Kathryn Bard, an archaeologist at Boston University who was not involved in the work. “That's why this cemetery is important.”

Underground Network
The latest work began in 2014 when Parcak and her colleagues noticed evidence of looting pits in high-resolution satellite images. From 2009 to 2013, the dark pockmarks multiplied in the images. But from the sky, Parcak notes, the team couldn't be sure where the holes led. 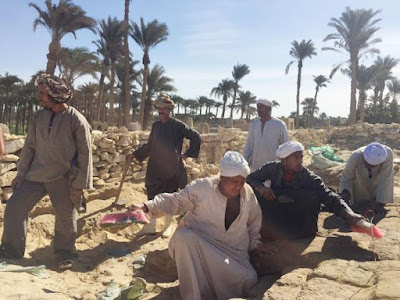 Since then, work on the ground that was partially funded by National Geographic revealed that most of these pits led to tombs. At each site, the team carefully documented features of the tombs, collecting images and GPS coordinates to assemble a database for the region.

Many shaft tombs had places for up to eight burials, which means the interlocking mortuary system likely housed at least 4,000 individuals in the afterlife.

“They used all the space they could get their hands on,” says Parcak, who compares the dense system of graves to the winding tunnels of a rabbit warren. “Many would have been reused by families or grandchildren, or great-grand children, or third cousins three times removed.”
Fragments of Information
By the time the researchers arrived on the scene, looters had emptied most of the tombs. Parcak's work previously suggested that looting intensified in Egypt during the economic instability that followed the 2009 recession and the 2011 revolution. Lisht seemed to be no exception.

But Bard and other Egyptologists believe that there's still information to glean.

“I think it was a good first step,” Mark Lehner, director of Ancient Egypt Research Associates, says of the mapping and documentation efforts. Pottery shards, fragments of wall murals, human remains, and even the tomb structures themselves can help researchers learn more about the health, economic status, and mortuary practices of the people who once lived in the capital.

“This is really, to me, where the value is of this work,” says Parcak. She adds that these latest finds are limited to the southern part of the site, and the team hopes to continue work in the northern regions next season.

“Like all these other sites in Egypt,” she says, “there’s a lot left to map and discover.


Source: National Geographic
For All Related Posts of New Discoveries Click Here
at September 12, 2018 No comments:

New Discovery, Nile Delta: One of The Earliest Settlements of the Nile Delta Uncovered in Daqahliya Governorate

An Egyptian-French mission at the Tell el-Samara site in the Delta governorate of Daqahliya has recently uncovered one of the oldest villages ever discovered in the Nile Delta. Written By/ Nevine El-Aref. 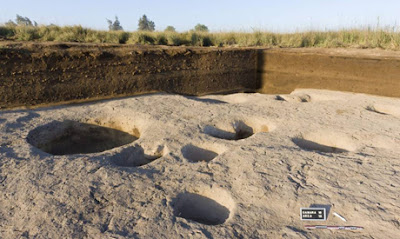 The joint mission excavated the remains of a Neolithic settlement, whose occupation lasted until the 2nd dynasty (ca. 4200-2900 BC), at the bottom level of the El-Samara site.  “Discoveries from the Neolithic period are virtually unknown in this area, so this finding is of the upmost importance,” said Frederic Geyau, the head of the mission.

The only other settlement discovered so far from the Neolithic period is the town of Sais, which was excavated by the Egyptian Exploration Society. The significant amount of data collected at Tell el-Samara since 2015 provide a unique opportunity to gain a better knowledge of the prehistoric societies living in Lower Egypt a thousand years before the 1st dynasty. From the pottery and artefacts found at the site, researchers believe that communities settled in the wetlands of the Nile Delta as early as the end of the 5th millennium BC.

Ayman Ashmawi, the head of the ancient Egyptian antiquities sector, told Ahram Online that the mission has also discovered a dozen silos containing a sizable quantity of animal bones and botanical remains, which will allow for scientists to study the subsistence strategies of these populations.

He also said that the analyses of these organic remains will use cutting-edge technologies and, in conjunction with uncovering the unexcavated areas in the seasons to come, will definitely provide critical insights on the first populations of the Nile Delta, as well as providing insight into the origins of agriculture and husbandry in Egypt.
Source: Ahram Online
For All New Discoveries Posts Click Here
at September 04, 2018 No comments: