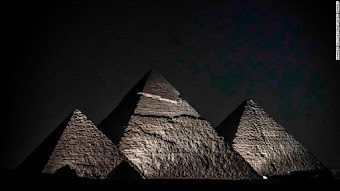 The long-awaited project to develop the tourist services and facilities on the Giza Plateau is to begin operations in 2021.
This week saw the trial operations of the plateau’s first environmentally friendly electric bus and restaurant within the framework of the joint cooperation protocol signed in 2018 between the Supreme Council of Antiquities (SCA) and Orascom Pyramids Entertainment to develop services on the Pyramids Plateau.
Minister of Tourism and Antiquities Khaled El-Enany and Naguib Sawiris, chairman and CEO of Orascom, witnessed the trial operation of the bus service that eventually will replace all other cars and buses on the site.
They announced the opening of “Nine Pyramids”, the first restaurant and lounge to be located within the Pyramids area, specifically on the southern side of the plateau that overlooks nine royal tombs and has a superb view.
The architectural part of the Giza Plateau Development Project was implemented by the Armed Forces Engineering Authority and is supported by funds from the government.
Preparations are underway to start operating the project, with the inauguration scheduled before mid-2021, El-Enany said.
Today, we announce the opening of the first touristic restaurant in the Panorama area of the Pyramids Plateau, without any major construction work in accordance with the requirements of the archaeological area.
This project is the first fruit of the protocol signed between the Supreme Council of Antiquities and Orascom Investment Holding that entails providing and operating services in this area and which was signed in December 2018,” he added.
The restaurant is built in a subtle wooden setting, with pillows scattered on the ground to emulate a Bedouin style.
Its unique location offers a view of the Pyramids. The project has mobile and self-cleaning toilets, and food and beverage services will be available in specified areas, as approved by the SCA.
The project is part of the ministry’s keenness to improve the quality of services provided to visitors to the area, one of the most important touristic destinations in the world. 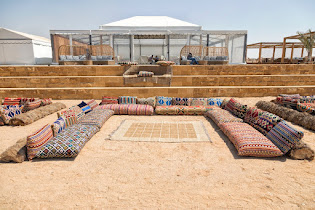 El-Enany said that Egypt was developing its touristic and archaeological infrastructure, and that this would have a positive impact on Egyptian tourism.
With the completion of this development project, the increase in the capacity of
the Sphinx International Airport, and the inauguration of the Grand Egyptian Museum (GEM) next year, the tourism map of Egypt would be transformed, he said.
“Our main objective, from the moment we embarked on the project of managing and operating visitors’ services at the Giza Plateau, was to upgrade the services provided such that they were up to the greatness of Egyptian civilisation and the magnificence of this historical site, while preserving the area from all forms of pollution and creating a fascinating experience for its visitors,” Sawiris said.
“We are happy to introduce these initial amenities and look forward to launching all the new services and features that will completely transform the visitor experience at the Giza Pyramids.”
Ashraf Halim, CEO of Orascom Pyramids Entertainment, said that to achieve the vision of transforming this unique site into a global archaeological tourist destination, robust cooperation has been undertaken with Egyptian and international consulting firms with expertise in similar projects.
These had developed engineering designs and architectural drawings in accordance with the international specifications commensurate with the archaeological site, he added.
He also said that in addition to the company’s commitment to providing all basic services at the highest level, electronic services would also be provided to visitors, including applications for prior reservations and to provide information about the archaeological site and its services.
He stressed that construction was underway in order to finalise the implementation of the project.
Source:ahramonline.
at October 25, 2020 No comments: