One of the modern landmarks of Egypt is located in the capital of Cairo.  Now, even though Egypt is on the continent of Africa, few people associate it with the wildlife of the continent.  I bet you’d be surprised, then, to learn that a very famous modern landmark in Cairo is 4 lions!  Don’t worry, these lions aren’t real though.  In fact, these 4 lions are bronze statues, placed in pairs on the Kasr El Nile Bridge as sort of guards or protectors of the bridge. 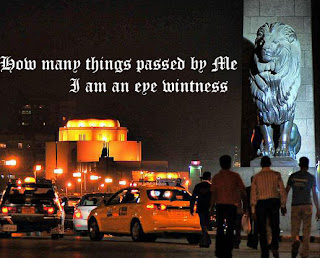 It’s actually strange to see these lions, designed by the French artist Alfred Jacuemart, standing proud on opposite ends of the Nile in the busiest city in all of Egypt.  The Kasr El Nile Bridge is a major bridge that links the East Bank of Cairo to the island district of Zamalek.  The bridge was completed in 1933 on the site of an older bridge that could no longer support the flow of traffic on it. The bridge, in its time, was quite a feat, as it is a 382 meter long arch-type bridge, with a section 67 meters long that would swing open to allow boats to pass.  This would happen in 3.5 minutes, and proved to be quite a challenge to Dorman, Long, and Co., the company assigned the task of building the bridge, who has also previously built the Sydney Harbor Bridge. When the bridge was completed, there was a huge “party” to celebrate, with King Fuad inviting many international figures to attend the dedication of the bridge to Kedive Ismail, King Fuad’s father. The lions, which were originally to be sent to Alexandria to stand guard around the statue of Mohamed Ali Pasha, but it was decided they would go to Cairo instead.


The lions have stood tall protecting the bridge, renamed Kasr El Nile Bridge after the 1952 Revolution, since they were installed in 1933.  That’s 78 years of doing a silent duty of guarding the bridge and those who use it to cross the river, as well as a slightly more embarrassing duty of “posing” for pictures with tourists, both foreign and domestic, and just people who are overall amused by the statues! These lions became so famous and recognizable that Egyptians have really put in an effort to maintain them.  After the revolution in February, people were even photographed cleaning the bronze protectors of the bridge. Basically, when you visit Cairo, you've got to take a short walk from the Museum of Egyptian Antiquities and Tahrir Square, and visit these incredible monuments!

Posted by Unknown at 6:18 AM No comments:

QUEEN Hatshepsut: She was a Pharaoh


Born in the 15th century BC, Hatshepsut, daughter of Tuthmose I and Aahmes, both of royal lineages, was the favorite of their three children. When her two brothers died, she was in the unique position to gain the throne upon the

death of her father. To have a female pharaoh was unprecedented and probably most definitely unheard of as well. When Tuthmose I passed away, his son by the commoner Moutnofrit, Tuthmose II, technically ascended the throne. For the few years of his reign, however, Hatshepsut seems to have held the reins. From markings on his mummy, archaeologists believe Tuthmose II had a skin disease, and he died after ruling only three or four years.

Hatshepsut, his half sister and wife, had produced no offspring with him (her daughter Nefrure was most likely the daughter of her lover Senmut), although he had sired a son through the commoner Isis. This son, Tuthmose III, was in line for the throne, but due to his age Hatshepsut was allowed to reign as queen dowager.

Hatshepsut, as a female, had many obstacles to overcome. There was always a threat of revolt, especially as her bitter nephew came of age. Using propaganda and keen political skills, she deftly jumped each hurdle she faced. To quell the fears of her people, she became a "king" in all statuary and relief during her reign. She even dressed in the traditional garb of male rulers: the shendyt kilt, the nemes headdress with its uraeus and khat headcloth, and the false beard. Although there were no wars during her reign, she proved her sovereignty by ordering expeditions to the land of Punt, in present-day Somalia, in search of the ivory, animals, spices, gold and aromatic trees that Egyptians coveted.

These expeditions are well documented in the hieroglyphic inscriptions on the walls of her temple. With these inscriptions are included incised representations of the journey, including humorous images of the Puntites and their queen, at whom the Egyptians no doubt looked while restraining a giggle; the queen has folds of fat hanging over her knees and elbows, her back is crooked and she has an aquiline nose. To the short, thin Egyptian she was probably quite a sight. Hatshepsut, in a final bid to be recognized as a legitimate queen, constructed a fabulous temple in the Valley of the Kings, of all places, by a tall plateau at Deir-el-Bahri, across the Nile from Thebes.

This propaganda worked well to cement Hatshepsut's position. But as Tuthmose III grew, her sovereignty grew tenuous. He not only resented his lack of authority,after his death, however, his sarcophagus was completely destroyed. The hard stone that had been carved for his funerary coffin was found in over 1,200 pieces. His mummy was never found.

Hatshepsut's mummy was likewise stolen and her tomb destroyed. Only one of the canopic jars was found, the one containing her liver. After her death, it is presumed that Tuthmose III ordered the systematic erasure of her name from any monument she had built, including her temple at Deir-el-Bahri. Since most of the images of her were actually males, it was convenient to simply change the name "Hatshepsut" to "Tuthmose" I, II or III wherever there was a caption. Senmut's name was also removed. Whether Tuthmose killed Hatshepsut is questionable but likely. Since he paid little respect to her in death, it is quite possible he paid even less in life.

803 Days to go.... In a speech Hisham Zazua, Egypt’s Tourism Minister, said there was evidence that tourism in Egypt had fallen ill but was not dead, and that there was still hope for the revival of the sector if the country’s political environment were to stabilize.  He pointed out that tourism in Egypt had increased throughout the month of March by 22% compared to same period in 2012 and that total numbers for 2012 rose 17.1% compared to that of 2011.
Zazua also said that the Grand Egyptian museum’s soon to be established fourth location will help spark interest in the country’s ailing tourism sector, putting rare antiques and artifacts on public display. A number of Egypt’s hotels have established a donation program within their facilities to help fund the project, presenting tourists with the option to donate anywhere With $1 to the project for each night at the hotel.

The program was announced during a press conference held by the Ministers of Tourism and Antiquities to sign a memorandum of understanding supporting the construction of the new museum.


Zazua said that he expected tourists to be enthusiastic about the new museum, adding that he was confident they would be willing to contribute to its construction. He said the new museum would help display the grandeur of ancient Egyptian civilization, in addition to sending out a positive message about the viability of Egypt’s tourism sector. This message will be spread as the Ministry’s of Tourism and Antiquities, along with the Hotel Facilities Chamber, prepares to launch an advertising campaign for the new museum within the coming weeks.

Posted by Unknown at 6:22 AM No comments:

11 April 2011 … During the current excavation at the Amenhotep III temple on west bank,Luxor, a statue of Amenhotep III was found. Dr. Zahi Hawass says “This statue was one of two statues once stood at the northern entrance of Amenhotep III and they were probably destroyed during the earthquake took place in Egypt in 27 B.C and they were buried since then.” Zahi added “at the moment the process of restoring the statue and putting it together is ongoing to re-erect the statue in its original site. The head of the statue is still buried underground and excavation is on. Probably the discovery of the other Amenhotep statue will be found during this season. 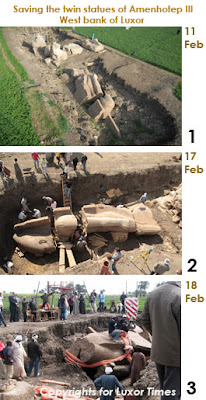 11 FEBRUARY 2013 … The Egyptian European mission working on Amenhotep III temple in Kom El Hettan, started the process of moving 2 statues of Amenhotep III after discovering them in a plot of land next to the temple on the west bank. Those two statues are considered the largest of Amenhotep III. Each of the limestone statues are of 14m high, based on 4m high base. The statues represented the King standing at the northern entrances of the temple. They were discovered in 1933 then re-discovered and recently they were submerged in irrigation water in the agriculture area and required a quick intervention to safe and move the statues.

18 FEBRUARY 2013 ... the minister of Antiquities in co-operation with the European mission headed by Dr. HourigSourouzian started moving the blocks and massive parts of the two statues of Amenhotep III, in order to restore and re-erect them.

After the two statues are moved to their new location, the restoration will start immediately guided by an inscription found on the back of one of the statues showing how the statues looked when it was erected which give a clear idea on how it should be like and will help in restoring them successfully in order to open them to public as also a lights’ system will be installed to turn them into a new tourist attraction spot.

A German team participating in the project which is funded by the German side to move the statues 60 meters to make sure they are safe then the restoration project will start which will include rejoining more than 20 blocks to the statues. 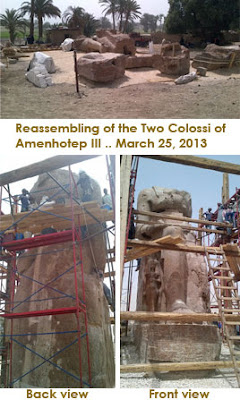 25 MARCH 2013 ... The Egyptian-European mission celebrated the end of the first season by holding an event to start reassembling the two colossal statues of Amenhotep III on concrete pedestals which were constructed especially for that.

Two colossi of Amenhotep III were standing at the North Gate of the Funerary Temple of the king, facing north.  Each was a monolith of quartzite hewn in the quarries of Gebel El-Ahmar near Ancient Heliopolis, and transported to Thebes to precede the Northern Gate of the funerary temple precinct of Amenhotep III.  Both colossi represent the king striding, crowned by the white crown of Upper Egypt and wearing the pleated kilt.

The plan to reassemble the pieces and raise the colossi in the same direction, on solid foundations 110m to the West and 8m higher on the bedrock belonging to the Antiquities has been approved by the Permanent Committee of the SCA.  The plan is designed by architect Nairy Hampikian, field manager of the works on this site the foundations have been structurally calculated by structure Engineer Mohamed El-Esawy, who also supervised their execution.  The new reinforced concrete bases were placed only after the investigation of the soil and archaeological soundings, which assured the joint team that the ground was absolutely free of any antiquities.