ABYDOS: The search for OMM SETY

Dorothy Louise Eady
also known as Omm Sety or Om Seti (16 January 1904 – 21 April 1981), was Keeper of the Abydos Temple of Seti I and draughts woman for the Department of Egyptian Antiquities. She is especially well known for her belief that in a previous life she had been a priestess in Ancient Egypt, as well as her considerable historical research at Abydos. Her life and work has been the subject of many articles 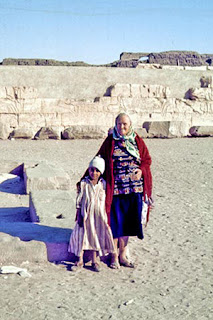 Dorothy Louise Eady was born in London in 1904, and raised in a coastal town. At the age of three, after falling down a flight of stairs, she began exhibiting strange behaviors, asking that she be "brought home". This caused some conflict in her early life. Her Sunday school teacher requested that her parents keep her away from class, because she had compared Christianity with "heathen" Ancient Egyptian. She was expelled from a Dulwich girl’s school after she refused to sing a hymn that called on God to "curse the swart Egyptians". Her regular visits to Catholic mass, which she liked because it reminded her of the "Old Religion", were terminated after an interrogation and visit to her parents by a priest.

After being taken by her parents to visit the British Museum, and on observing a photograph in the New Kingdom temple exhibits room, the young Eady called out "There is my home!" but "where are the trees? Where are the gardens?" The temple was that of Sety I, the father of Rameses the Great. She ran about the halls of the Egyptian rooms, "amongst her peoples", kissing the statues' feet. After this trip she took every opportunity to visit the British Museum rooms. There, she eventually met E. A. Wallis Budge, who was taken by her youthful enthusiasm and encouraged her in the study of hieroglyphs.

In 1931 she moved to Egypt On arriving in Egypt, she kissed the ground and announced she had come home to stay. And married to Emam Abdul magied (English teacher)  Their son was named Sety, from which is derived her popular name 'Omm Sety' ("Mother of Sety").

Move to Abydos
Abydos had a special significance for her, because it is where she believed Bentryshyt had lived and served in the Temple of Seti. She had made short pilgrimages to the site before, during which she had demonstrated her advanced knowledge. At one of these trips to the temple, the chief inspector from the Antiquities Department, who knew about her claims, had decided to test her by asking her to stand at particular wall paintings in complete darkness. She was instructed to identify them based on her prior knowledge as a temple priestess. She completed the task successfully, even though the painting locations had not yet been published at this time.

She described the Temple of Seti as like entering a time machine, where the past becomes the present and the modern mind has difficulty understanding a world in which magic is accepted. She claimed that the scenes depicted on the temple walls were active in the minds of ancient Egyptians on two levels. Firstly, they made the actions displayed permanent. The painting of Pharaoh offering bread to Osiris, for example, continued his actions so long as the depiction remained. Secondly, the image could be animated by the spirit of the god, if the person stood before the depiction and called on the god's name.
Source: Wikipedia

Email ThisBlogThis!Share to TwitterShare to FacebookShare to Pinterest
Labels: Abydos

The fight against illicit traffic in cultural goods requires the enhancement of both legal instruments and practical tools disseminating information and raising public awareness.
The Emergency Red List of Egyptian Cultural Objects at Risk aims to help art and heritage professionals and law enforcement officials identify Egyptian objects that are protected by national and international legislation  In order to facilitate identification, the Emergency Red List describes the categories or types of cultural items that are most likely to be illegally bought and sold.

Museums, auction houses, art dealers and collectors are encouraged not to acquire these objects without having carefully and thoroughly researched their origin and all the relevant legal documentation. Due to the great diversity of objects, styles and periods, the Emergency Red List of Egyptian Cultural Objects at Risk is far from exhaustive. Any cultural good that could have originated in Egypt should be subjected to detailed scrutiny and precautionary measures.

Posted by Unknown at 1:32 AM No comments:

NEWS: Mallawi Museum Before & After !!!!

Egypt’s Antiquities Minister says some 1,050 artifacts spanning 3,500 years of history were looted from the Malawi National Museum south of Cairo last week, highlighting the fragile security situation in the provinces and the threat the latest unrest poses to the nation’s treasure trove of antiques and man made marvels. SOURCE: International Business times


After six hours of investigations at the Malawi National Museum (MNM) in the Upper Egyptian city of Al-Minya, an archaeology committee reveals that the museum has been almost completely looted amid political unrest on the streets. SOURCE: Ahram Online

Among the stolen antiquities was a statue of the daughter of Pharaoh Akhenaten, who ruled during the 18th dynasty. Archaeologist Monica Hanna described it as a "masterpiece". Other looted items included gold and bronze Greco-Roman coins, pottery and bronze-detailed sculptures of animals sacred to Thoth, a deity often represented with the head of an ibis or a baboon. SOURCE: Fox news
Related articles: the globe & mail / RT / Al Arabia


Objects returned of the looted Museum of Mallawi:

10 more objects returned of the looted museum of Mallawi
After receiving two objects by a man in Minia. Ministry of Antiquities has received 10 other objects including 20cm limestone statue of Thoth as a monkey, three pottery statues of 20cm height each, 25 cm bronze statue of Osiris, 19cm bronze statue of Osiris, a gypsum block measures 11x9cm shows Ibis and Maat feather and three pottery pots. The objects were returned by people in Minia after hearing about the rewards it was promised to whom may bring any of the stolen objects back. The returned objects were transferred to the store house in Ashmonien. SOURCE: Luxor times

Story about the museum:

Mallawi Museum was one of the prominent tourist attractions in Mallawi. It comprises of two floors divided into four halls. The museum was established in 1963 to be a center for displaying the fragments, statues and pharaonic Monuments found in many areas such as Tuna El Gabal and Ashmonein. Mallawi Museum encloses a marvelous collection of monuments dating back to the Greco- Roman period and many other periods.
Posted by Unknown at 6:20 AM No comments: 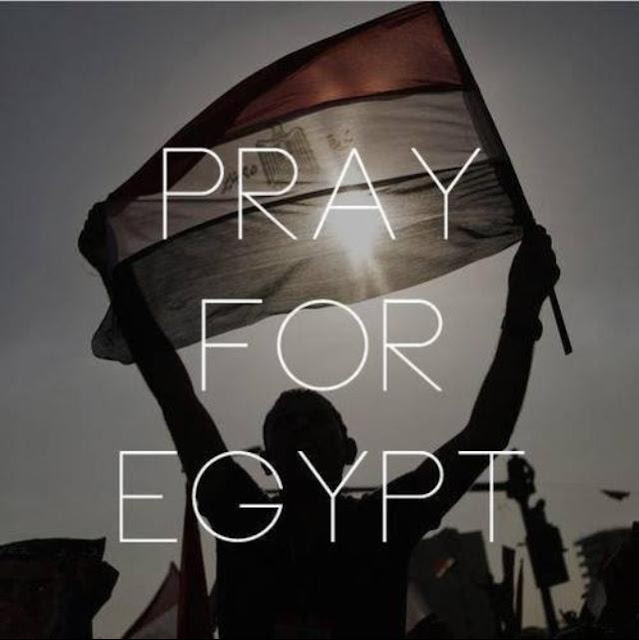 PLEASE READ IF U WANT TO KNOW: Misinformation about Egypt’s ‘massacre’

At the beginning we said NO POLITICS in this blog, but what is happening in the international media due to a wrong information and wrong image about Egypt. So we decided to let you know ...

Do you really want to know, what is going in Egypt from the Egyptians point of view, so please read this article by Abdallah Schleifer by Al Arabiya News website.

This is what the Muslim Brothers is doing, burning Egypt - the world must see and know:

This picture is from the Egyptian people to Mr. Obama 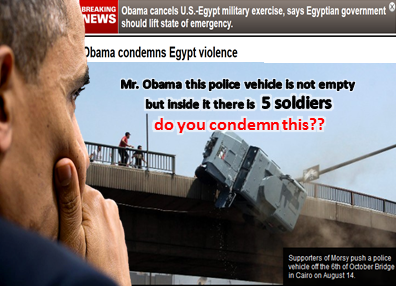 Pray for peace and reconciliation in Egypt
Posted by Unknown at 12:08 PM No comments:

Posted by Unknown at 8:45 AM No comments: 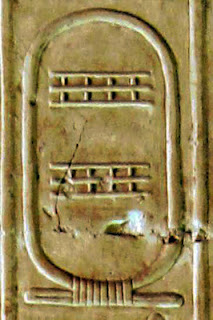 According to Dr. Mostafa Amin, Secretary General of the Supreme Council of Antiquities, a team of specialists from the Minister of Antiquities in co-operation with the French Institute of Oriental Archaelogy, starts today moving two wooden planks of two funerary boats belong to the era of King “ Den” also known as “Hor-Den, Dewen and Udimu” who is mostly known as the first to use the title “King of Lower and Upper Egypt” and the first depicted wearing the double crown.

The wooden planks were discovered last week in the early dynastic cemetery to the north of Mastaba No. 6 in Abu Eawash area.
The first plank is 390 cm long while the other is 70 cm long beside another wooden sheet belongs to the boat which was discovered last year and it is 120 cm long.

Dr. Mostafa Amin explained that the wooden pieces are in bad condition and they will be transported to the restoration centre at the Grand Egyptian Museum to analyze in order to restore using the latest techniques.
Posted by Unknown at 3:11 AM 4 comments:

An Egyptian citizen tried Wednesday to smuggle three Coptic artifacts from Cairo International Airport to the United States in his personal luggage. Airport police and customs succeeded in aborting the smuggling attempt, detaining the Egyptian for investigation and seizing the artifacts.

The Archaeological Unit at the airport examined the pieces and approved their authenticity. Ahmed El-Rawi, head of the unit, said that two of the three artifacts are carved in wood while the third is made of iron with a wooden frame. 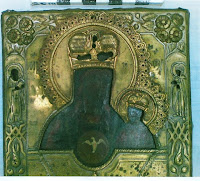 The three artifacts depict the Virgin Mary holding Jesus in her hands, Jesus sitting on a cloud, and two ladies in front of each other with the a cross in one hand and a palm in the other. Minister of State for Antiquities Mohamed Ibrahim said the artifacts will be transferred to the Coptic Museum in Old Cairo for restoration and to trace their origin. He also suggested putting them on display at the museum for two months.

Posted by Unknown at 2:44 AM No comments: 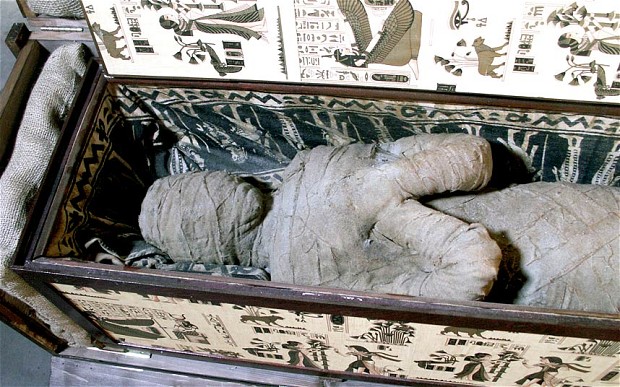 Experts were investigating whether the "mummy", which was inside a sarcophagus complete with death mask, canopic jar – used by ancient Egyptians to store removed organs – and other artefacts was a genuine, ancient Egyptian relic, a replica or something entirely different.
The ten-year-old, Alexander, made the mystery discovery while searching around his grandmother's flat in Diepholz, northern Germany.
Alexander's father, Lutz Wolfgang Kettler, a dentist, recalled that his own father had acquired a chest while travelling in north Africa in the 1950s and had it shipped back to Germany. The senior Mr Kettler had apparently never spoken about the chest or its contents.
"Mummy unwrapping parties" were popular among certain elements of German high society in the 1950s, he said.
Mr Kettler told Bild newspaper that the discovery was "a mystery", but stated that he thought the "mummy" would prove to be a replica.
Source : the telegraph
Posted by Unknown at 4:58 AM No comments: