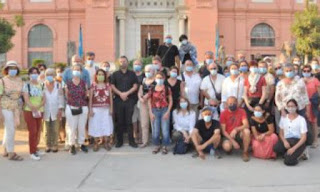 CAIRO – 15 September 2020: The first tourist group from France visited the Egyptian Museum in Tahrir, after they visited the Saqqara and Dahshour antiquities areas. That came about 14 days after the resumption of the cultural tourism movement in Egypt.
The tourists enjoyed a tour at the archaeological area, and expressed their happiness to visit Egypt to get acquainted with its grandiose ancient civilization.
The French group wished that the details of the archaeological discovery and closed coffins that have been recently found in the Saqqara area would be announced while they are in Egypt, as the promotional clips that were published about the discovery dazzled them.
Egypt’s Minister of Tourism & Antiquities Khaled el-Anani held a meeting last week with several investors, representatives of cultural tourism and hotel managers in Luxor, to discuss the conditions of the tourism sector in the governorate and listen to their requests and proposals to stimulate and revitalize the cultural tourism movement after its resumption in early September.
Source:egypt today
Posted by Egitalloyd Travel Egypt at 3:39 PM