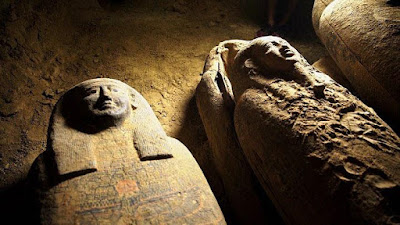 Egyptian authorities have discovered a collection of more than a dozen coffins believe to hold human mummies that are more than two millennia old.
The 13 chambers were uncovered piled up in a well in Saqqara, an ancient site located around 20 miles south of Cairo, Egypt's capital, according to Egypt's Ministry of Tourism and Antiquities.
After being found almost 40 feet deep underground, archaeologists said the chambers were protected from weathering, leaving original details visible on the coffins' exteriors.
Khaled El-Enany, Egypt's minister of tourism and antiques, said it was "an indescribable feeling when you witness a new archeological discovery" in a Twitter post.
In a Facebook video, one of the archaeologists says it is a unique find. "I have never seen this before," he says.
Egypt only last week opened its archaeological sites and museums after months of closures because of the coronavirus pandemic. Such finds are not only crucial to Egypt's heritage but also its economy.
Archaeologists also found four caskets holding mummies in Saqqara earlier this year.
Source:thenational
Posted by Egitalloyd Travel Egypt at 6:30 PM