Luxor and Aswan floating hotels to reopen in October. 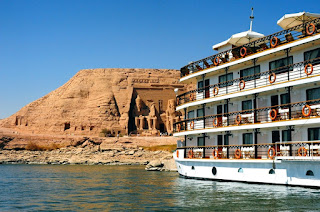 The floating hotels have begun executing the protocol and policy changes that will allow them to obtain certification to reopen at the beginning of next month, as confirmed by Egypt’s Ministry of Tourism and Antiquities.
Upon certification, the hotels will be able to operate at 50 percent capacity.
Luxor and Aswan have 130 floating hotels, he said, 30 to 50 of which are expected to resume business initially, given that the return of tourism is anticipated to be gradual.
Following the announcement, Egypt’s numerous tour agencies began coordinating trips, Agamy said, pointing out high demand from many countries, including Japan and Spain.
Tourism investors have offered the Minister of Tourism and Antiquities, Khaled al-Anani, a number of ideas to revitalize the industry after operations resumed in early September, Agamy mentioned.
Some of the proposals included administering a PCR analysis for tourists upon arrival at Luxor and Aswan airports.
The test is currently available for those flying into Sharm el-Sheikh and Hurghada airports, and its availability is expected to contribute to an increase in tourism within the two governorates, he added.
The Luxor and Aswan governorates petitioned for an extension to the “Spend Summer in Upper Egypt” initiative, which was launched by the ministry to encourage tourism in Upper Egypt by offering 50 a percent discount on full ticket prices for foreign visitors at museums and archaeological sites.
They have requested extending the initiative to December.
The governorates also called for a reduction in domestic airfare to Luxor and Aswan, another measure they believe will help stimulate tourism in the region.
Anani promised to consider all requests and proposals, stressing that the state will spare no effort to promote the tourism sector.
The Ministry of Tourism and Antiquities confirmed an increase in the coming months of inspection campaigns on hotels and archaeological sites, in order to ensure that places are adhering to the government’s precautionary measures and safety controls.
Source:Egypt independent
Posted by Egitalloyd Travel Egypt at 9:42 AM