The creation of a US$100 million international fund to safeguard endangered cultural heritage in areas of armed conflict was one main outcome of this week’s Abu Dhabi Conference. Written By/ Nevine El-Aref. 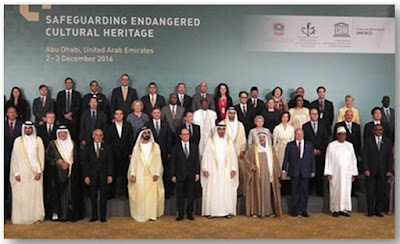 On the initiative of French president François Hollande and Abu Dhabi crown prince sheikh Mohamed Bin Zayed al-Nahyan, an International Conference for the Protection of Endangered Cultural Heritage in Armed Conflict Areas (ICPECHACA) was held late last week under the patronage of UNESCO in Abu Dhabi.

The two-day Conference brought together heads of state and ministers from over 40 countries affected by heritage loss due to armed conflicts, alongside key players involved in the field of heritage preservation, international public and private institutions, museums and private donors engaged in the field of cultural heritage, as well as experts working in the field.

After various speeches, commentaries and presentations, the Conference launched a Declaration on the Protection of Endangered Heritage that endorsed the creation of a new International Fund for the Protection of Heritage with an initial contribution by France of US$30 million and the objective to collect US$100 million in the future. It also recommended a follow-up conference in 2017 to help assess the implementation of the initiatives outlined in the Abu Dhabi Declaration.

According to a UNESCO press release, Hollande said that the “Fund will provide much-needed resources to protect heritage under attack and will be managed in close collaboration with UNESCO and respect UNESCO Cultural Conventions and international norms.”

“One year ago, we adopted the Paris Climate Agreement at the COP21 Conference for the preservation of our planet and for future generations. Today, we adopt this Abu Dhabi Declaration, with concrete measures and new tools to protect the legacy of our ancestors. This is a call to action, as there is no greater responsibility than that of building bridges between the past and the future of humanity,” Hollande said…. READ MORE.
Source: Ahram Online

Posted by Egitalloyd Travel Egypt at 10:17 AM No comments: 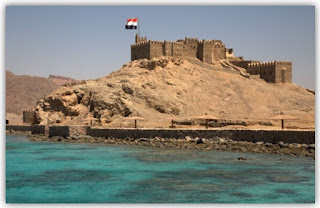 Egypt has submitted a preliminary report to register Pharaoh's Island near Taba on the UNESCO's World Heritage List. Written By/ Nevine El-Aref.

The Ministry of Antiquities submitted Wednesday a preliminary report to the World Heritage Committee (WHC) to register Pharaoh's Island near in Taba in Sinai on the UNESCO's World Heritage List.

A final report is scheduled to be submitted in February 2017.

Pharaoh's Island includes of a fortress built by the Ayyubid Prince Salaheddin to protect the Islamic Empire from the Crusades.

El-Shazly explained that her department is working hard on the preparation of files to be submitted to the WHC in order to list other Egyptian sites, like Alexandria's Kom El-Dekka, Roman Theatre, the Pompey Pillar, and underwater antiquities, as well as Ptolemaic temples of Dendera, Kom-Ombo and Edfu, on the WHC's list.
Source: Ahram Online
Posted by Egitalloyd Travel Egypt at 3:11 PM No comments:

Yesterday  at the El-Manestirly Palace overlooking the El-Roda Nile Corniche, UNESCO celebrated the Egyptian winner of "The Photo and Story" contest held in 2015 as part of the global #Unite4Heritage campaign.

Ahmed Ebeid, general supervisor of the minister of antiquities’ office, told Ahram Online that the competition, which attracted more than 10,000 entries from all over the world, involved participants posting on social media their most inspiring photos of cultural heritage and explain why they matter to them.

The entries were narrowed down to the top 20, Ebeid said, and from there the winner was selected. The winning photo, captured by Egyptian photographer Mohamed Abdel-Gawad, shows traditional moulid dancing in Egypt.

The photo shows a woman dancing at El-Sayeda Fatimah El-Nabawiya’s moulid in Cairo’s El-Batiniya to a song by one of the local bands. Women frequently dance and sing during moulids.

Moulid celebrations involve rituals dating back to ancient Egypt, such as receiving the blessings of awliya, henna and lighting candles.

They are also an important place for Egyptians from urban and rural areas and of different sects and ages to gather, dance, celebrate and listen to chants and prayers.

Posted by Egitalloyd Travel Egypt at 9:55 AM No comments:

The Ministry of Antiquities is preparing files on four archaeological sites in Alexandria and Sinai, to be submitted to UNESCO. Written By/ Nevine El-Aref.

The Ministry of Antiquities is preparing the required files to have four archaeological sites in Alexandria and Sinai added to UNESCO’s World Heritage List.

The sites, said Minister of Antiquities Mamdouh Eldamaty, are the Old City of Alexandria, the Ptolemaic Temples in Alexandria, and Al-Gundi and Salaheddin fortresses on Pharaoh Island in Sinai.

He explained that the sites that would be registered for the Old City of Alexandria include Kom Al-Shuafa, Kom Al-Dikka, the Pompey Pillar and the underwater antiquities in both the eastern harbour and Abuqir.

A collection of Islamic monuments, among them the cistern of Ibn Al-Nabih and the old Alexandria towers, would also be on the documentation list.

Ahmed Ebeid, supervisor for international organisations in the ministry, as well being the responsible for international cooperation issues, told Ahram Online that the ministry’s permanent committee is to meet soon in order to discuss and review the documentation files of the sites before sending them to UNESCO.

He went on saying that the ministry is now organising a number of workshops to trains archaeologists and curators on preparing documentation files for other archaeological sites.
Source: Ahram Online

Posted by Egitalloyd Travel Egypt at 11:00 PM No comments:

Egyptian traveler Sherif Lotfy is to tour around Giza Plateau tomorrow with his motorbike in support of the #Unite4Heritage campaign. Written By/ Nevine EL-Aref.

Under the auspices of President Abdel-Fatah El-Sisi, the Ministry of Antiquities is to organize two events tomorrow afternoon at the Giza Plateau in support of the recently launched UNESCO campaign #Unite4Heritage that aims at celebrating and safeguarding cultural heritage and diversity around the world.

The first event is a group stand, organized in collaboration of the ministries of defense, social services, youth and sports as well as education and higher education.

Participants will stand arm in arm around the Khufu's Pyramid for 15 minutes. A number of prominent Egyptian figures are set to participate in the event. Actresses Laila Eloui, the #Unite4Heritage envoy, and Elham shahin will be among participants. Later in the day, renowned Egyptian traveler Sherif Lotfy is to tour around the Giza Plateau on his motorbike, carrying the Egyptian flag in his hand.

Last year, Lotfy started biking from the foot of the Giza Pyramids to Switzerland and Tokyo carrying the Egyptian flag in attempt to promote Egypt’s tourism and break a record in the Guinness Book of Records, spreading a message of peace and love of nature throughout his travels.
Source: Ahram Online
Posted by Egitalloyd Travel Egypt at 10:30 AM No comments: