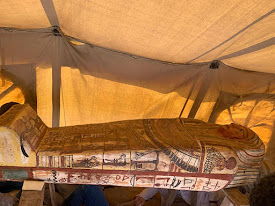 A total of 27 sarcophagi buried more than 2,500 years ago have been unearthed by archaeologists in an ancient Egyptian necropolis.
They were found inside a newly-discovered well at a sacred site in Saqqara, south of the capital, Cairo.
Thirteen coffins were discovered earlier this month, but a further 14 have followed, officials say.
The discovery is now said by experts to be one of the largest of its kind.
Images released show colourfully painted well-preserved wooden coffins and other smaller artefacts. 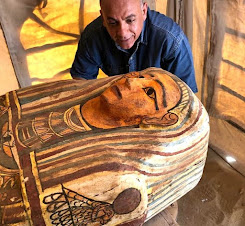 Saqqara was an active burial ground for more than 3,000 years and is a designated Unesco World Heritage Site.
Initial studies indicate that these coffins are completely closed and haven't been opened since they were buried," Egypt's antiquities ministry said in a statement on Saturday.
The statement adds that Egypt's Antiquities Minister Khaled al-Anani initially delayed announcing the find until he could visit the site himself, where he thanked staff for working in difficult conditions down the 11m-deep (36ft) well.
Excavation work is continuing at the site as experts attempt to establish more details on the origins of the coffins.
The ministry said it hoped to reveal "more secrets" at a press conference in the coming days. 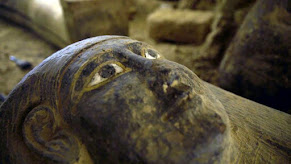 Other artefacts discovered around the wooden coffins also appeared to be well-crafted and colorfully decorated.
In November, a large cache of mummified animals discovered in 2018 by archaeologists near the Step pyramid of Saqqara were displayed to the public for the first time.
The discovery included mummified cats, crocodiles, cobras and birds.
Source:BBC
Posted by Egitalloyd Travel Egypt at 2:30 PM No comments: