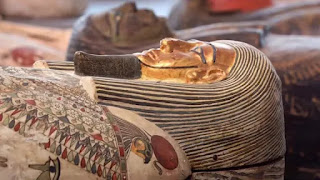 The number of mummy-filled coffins found in a series of burial shafts at Saqqara in Egypt keeps growing, archaeologists with the Egyptian Ministry of Antiquities reported.

At the start of September, the team had found 13 coffins with mummies inside. By the beginning of October, that number had risen to 59, and now the number is over 100, archaeologists reported in a statement issued Saturday (Nov. 14).

People are "asking how many coffins did we find. The answer is I don't know yet," said Mustafa Waziri, the secretary general of Egypt's Supreme Council of Antiquities, in a video released by the ministry and the Smithsonian Channel, which is filming the excavations. 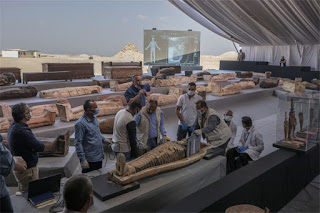 Inside the burial shafts, the team also found 40 statues depicting the deity "Ptah-Soker," the ministry said. This deity is an amalgamation of "Ptah," who was the god of Memphis, and "Soker," who was the god of Saqqara. Archaeologists also found 20 wooden boxes showing depictions of Horus — an Egyptian sky god with a falcon head. Additionally, two wooden statues are inscribed with the name "Phnomus," though the researchers are still trying to figure out who that person was in antiquity.

Numerous shabti figurines were also found. Ancient Egyptians believed that shabtis acted as servants for the deceased in the afterlife.

The various finds date back between roughly 712 B.C. and 30 B.C., according to the ministry statement. During this time period, ancient Egypt was occupied and controlled by foreign groups such as the Assyrians, Persians and Greeks. 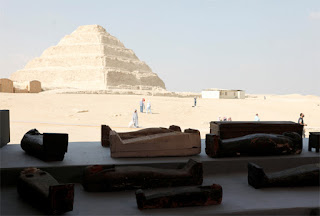 At times, Egypt would regain its independence only to lose it to another foreign power. Excavations continue at the site, and the archaeologists expect to find more coffins filled with mummies and other artifacts, said Khaled El-Enany, Egypt's antiquities minister.

The Smithsonian Channel is filming a documentary called "Tomb Hunters" and released a statement claiming that some of the artifacts date back 4,500 years — to around the time when the Giza Pyramids were being built. The antiquities ministry statement has not confirmed this claim.